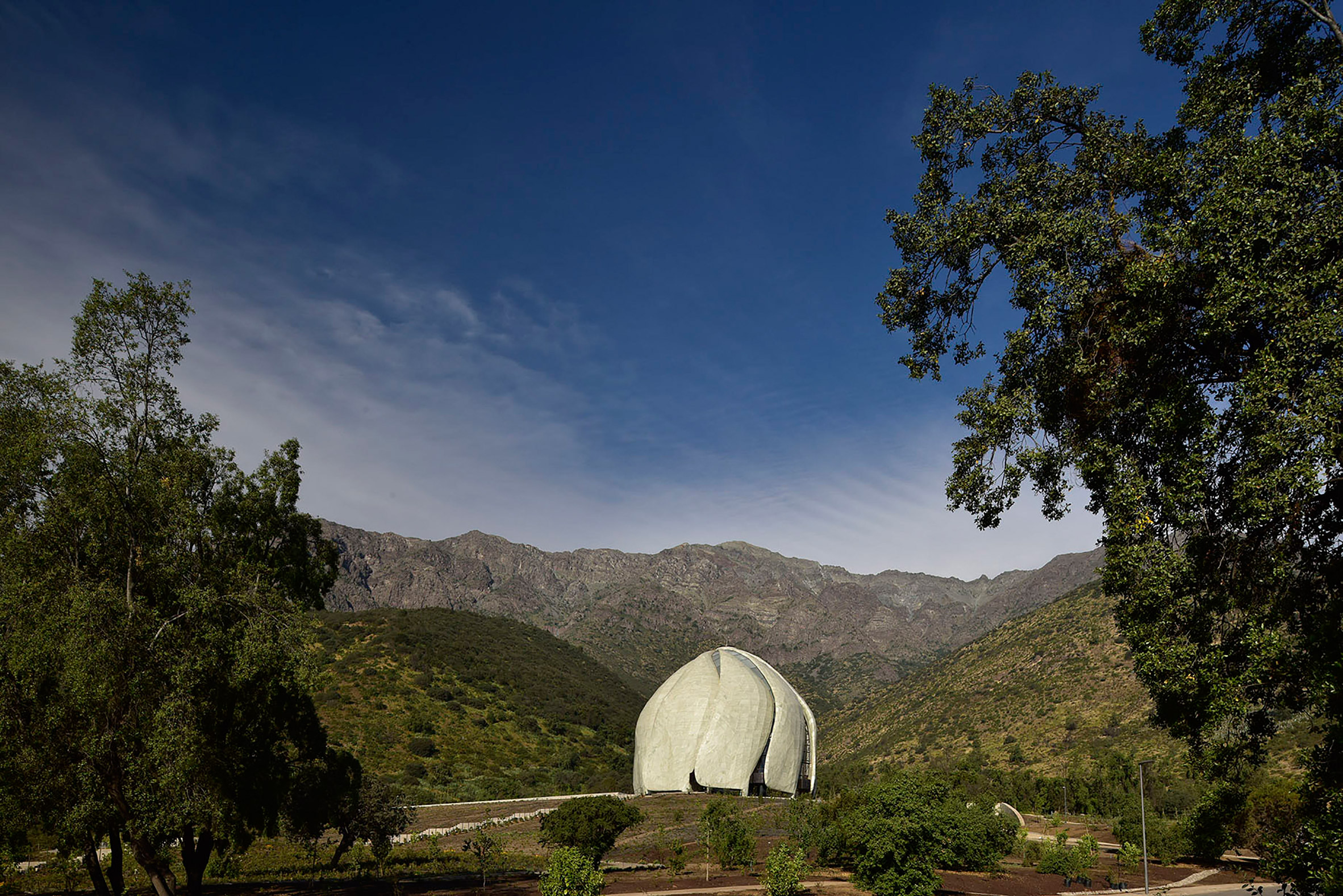 Sufi whirling dancers and Japanese bamboo baskets were among the references for this sculptural temple in Chile by Hariri Pontarini Architects.

The Bahá’í Temple of South America is located just outside of Santiago, in the foothills of the Andes Mountains.

“Nestled in the rolling topography of the mountains and surrounded by reflecting pools and a landscape of native grasses, this complex-curved temple of light acts as an invitation for spiritual contemplation and architectural pilgrimage,” said Hariri Pontarini Architects, a studio based in Toronto.

Fourteen years in the making, the project represents the last of eight continental temples commissioned by the religious Bahá’í Community – each meant to embody “technological innovation and architectural excellence”.

The building needed to be recognisable as a place of worship without references to specific iconography. “The Bahá’í faith is built on the tenet of universality; therefore, the architectural challenge is to create a design that would be welcoming to people of all faiths and cultures,” the architects said.

The team drew inspiration from varied sources, such as Sufi whirling dancers – who spin in large skirts as a form of physical meditation – Japanese bamboo baskets, and fragments of shattered glass. The “magic of dappled sunshine beneath a canopy of trees” was also an influence.

The resulting design is a sculptural building composed of nine identical, torqued wings. Inside, the temple contains a light-filled space for prayer and meditation that is topped with a central oculus.

The superstructure of the wings was built using hundreds of slim-profile steel members and nodal connections.

“Each of the wings rest on concrete rings and columns on elastomeric seismic isolators, so that in the event of an earthquake, the concrete pads slide horizontally to absorb the shock,” the team said.

The cladding materials used in the project were the result of “an intensive investigation into the material qualities that capture, express and embody light”.

The exterior is faced with cast-glass panels that were developed exclusively for this project. For nearly four years, the firm worked in collaboration with artisans at Toronto-based Jeff Goodman Studio to develop the cladding.

“A remarkable 1,129 unique pieces of both flat and curved cast-glass pieces were produced and assembled with meticulous care to create each of the nine wings,” Hariri Pontarini Architects said.

The interior is sheathed in translucent marble from the Estremoz quarries in Portugal. Flat pieces of stone were produced using a water jet cutter, while curved elements were carved directly from blocks.

The building is imbued with a wide range of colours throughout the day, while in the evening, it casts a soft golden glow.

“Between dawn and dusk, the temple’s glass and marble become infused with the wide range of seasonal colours that dance across Santiago’s sky,” the team said. “The light that is filtered to the inside of the building shifts from white to silver to ochre, then blue to purple.”

The architects noted that the temple’s design was developed through hand sketches, physical models and digital tools.

“The aim was to achieve an interplay of seeming contradictions: stillness and movement, simplicity and complexity, intimacy and monumentality – a solid structure capable of dissolving in light,” they said.

Other religious structures in Latin America include a concrete chapel by EMC Arquitectura that teeters on the edge of a hillside in El Salvador and a crystalline, white church by Moneo Brock that stands against mountains in Mexico.

The post Bahá’í temple in Chile by Hariri Pontarini features torqued wings made of steel and glass appeared first on Dezeen.