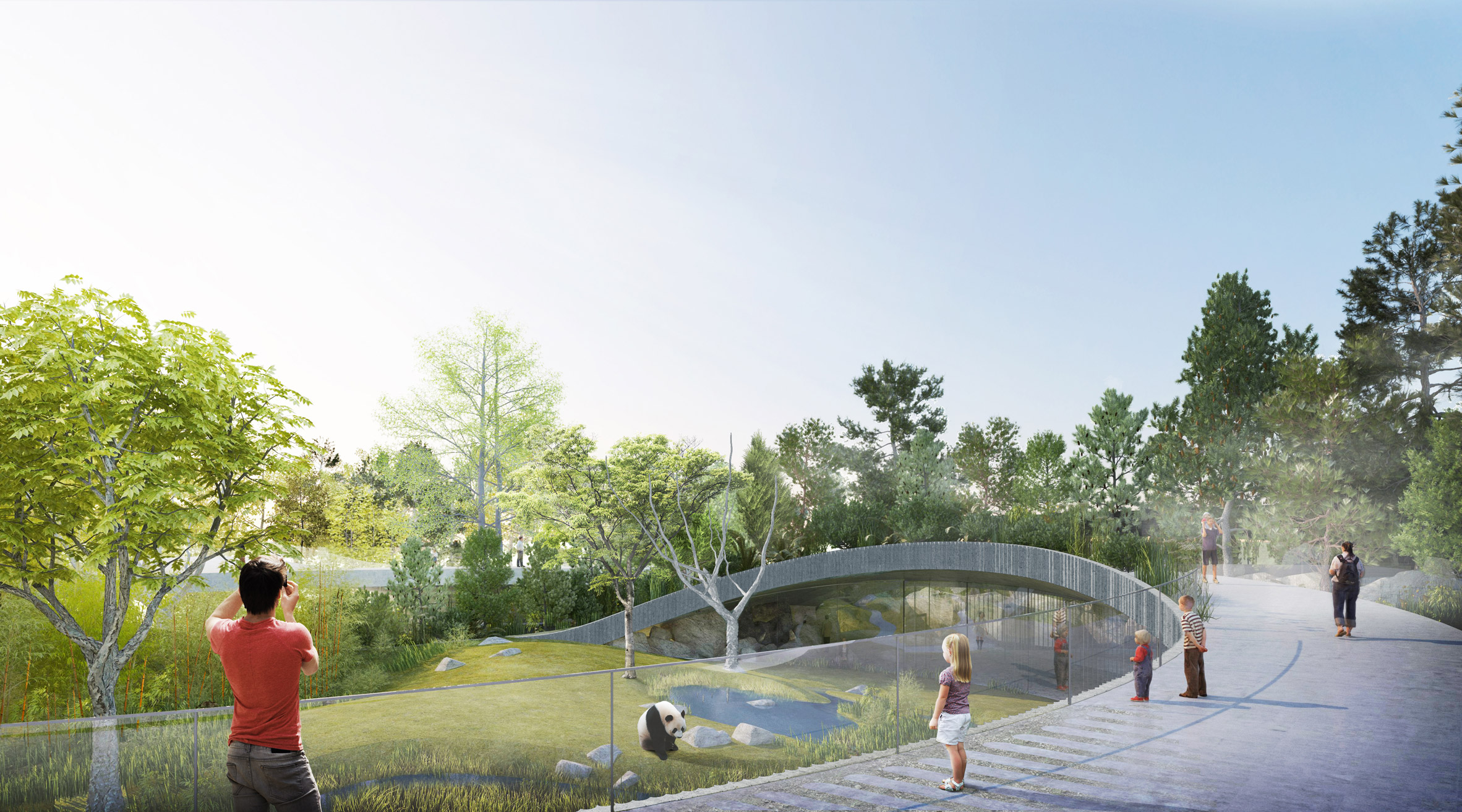 Giant pandas due to move to Copenhagen Zoo will make their home in a circular indoor-outdoor enclosure designed by Bjarke Ingels Group.

The Panda House is set to open in 2018 in time to accommodate two bears, who are being relocated from Chengdu, China.

Copenhagen Zoo – one of the oldest in Europe – asked Danish architect Bjarke Ingels’ firm BIG, Schønherr Landscape Architects and consultancy MOE to create the home for the new arrivals.

Totalling 2,450 square metres, the area will provide a variety of environments and separate spaces for the male and female pandas.

“To design a home for someone is like capturing their essence, their character and personality in built form,” said Ingels. “In the case of the two great pandas, their unique solitary nature requires two similar but separate habitats – one for her and one for him.”

The layout mimics the Chinese yin-yang symbol that represents opposite but balanced forces within a circle.

The halves will tilt up at either end to create an undulating landscape across two levels. A bamboo forest covers one side, and a more dense “misty” forest takes up the other – both designed to recreate the panda’s habitats in the wild.

Ramps will circle the Panda House so visitors can move from viewing the indoor spaces on the ground floor to the open-air areas above.

Additional pathways will pass through planted areas, linking to other parts of the zoo.

“The curvy lines are undulating in section to create the necessary separation between him and her – as well as between them and us,” said Ingels.

The ground floor will also includes a restaurant from which visitors will be able to watch the pandas, as well as elephants in their Norman Foster-designed enclosure opposite.

“Located at the heart of the park, we have made the entire enclosure accessible from 360 degrees, turning the two pandas into the new rotation point for Copenhagen Zoo,” Ingels said.

Construction is scheduled to begin later this year, once the budget of 150 million Danish Krone has been secured.

The pandas are moving to Copenhagen as a gesture of goodwill from the Chinese government following the Queen of Denmark’s visit to the country in 2014.

The same year, BIG released a vision for Denmark’s Givskud Zoo where animals and humans “co-exist”, and all the architecture is hidden within the topography.

Copenhagen Zoo recently opened an area for Tasmanian kangaroos, designed by White Arkitekter to allow visitors to get up close to the animals.