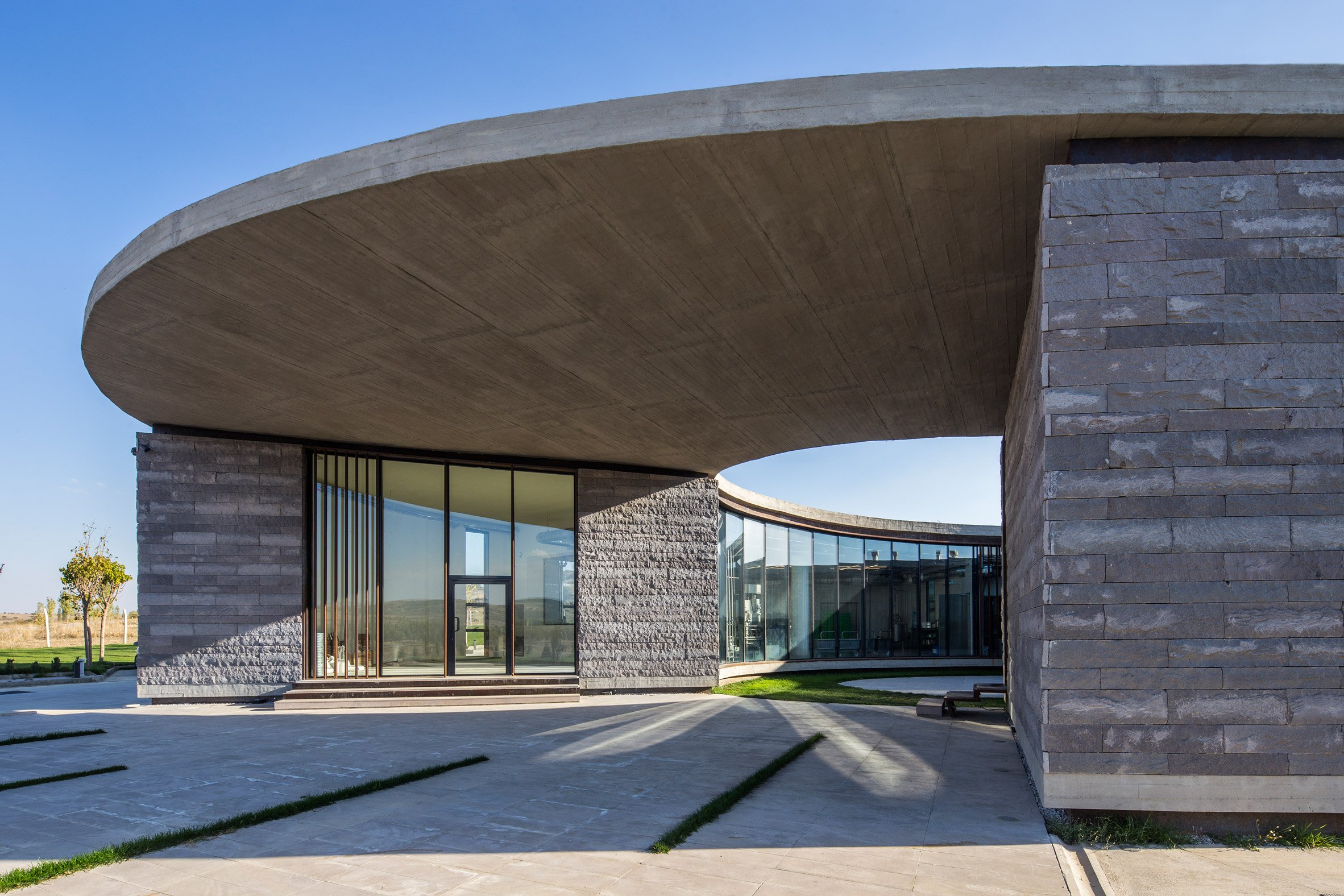 This boutique dairy factory in western Turkey by Slash Architects and Arkizon Architects wraps a glazed courtyard offering visitors glimpses of the cheese production within.

The Farm of 38° 30° is named after the coordinates of its site in a valley near the village of Afyon Tazlar, in Turkey’s Afyonkarahisar Province.

Istanbul-based Slash Architects and Arkizon Architects wanted to elevate the factory from its status as a simple production space to a cheese showroom.

Production process and spaces are arranged in an ellipse enclosing an inner green courtyard with a circular patio for events like tasting sessions.

While the outer facades are made predominantly of stone, glass walls surround the yard to offer visitors a 360-degree view of the building’s interior.

A large opening in the elliptical ring is intended to invite passersby into the internal courtyard. It is covered by a canopy that forms the sloping roof for the rest of the building.

“While ensuring maximum efficiency for the production line as in a ‘classical’ cheese factory building, the boutique factory adopts a more contemporary attitude via its monumental form,” said the architects

“The building wraps around an inner green courtyard and opens itself to the exterior via its large welcoming canopy,” they continued.

“The transparency of the facade lets us peek into the production spaces, while the staff animates the whole.”

From the covered entrance, a set of steps lead up to the glazed main entrance to the factory, which opens to the sales department with the production room placed behind.

Facing the main entrance, the staff doorway leads to the changing rooms and a walkway that wraps the internal courtyard.

Slats of Corten steel forming sun blinds in front of the glass walls tighten in sequence to increase the shade and privacy of spaces used by staff.

“The materiality of the facade reflects the degree of privacy and interest of the various spaces,” explained the architects.

“The entrance is fully open, followed by the sales office and the production spaces of the factory, both very transparent,” they added. “Moving on to more private spaces, the composition of the materials on the facade gradually offers less transparency.”

The building’s outer walls, made of local Afyon stone, feature tall and thin windows that offer views to the surrounding countryside. The openings are designed to control the natural light according to each specific room’s requirements.

The roof of the building slopes downwards with its maximum height over the entrance spaces to invite visitors in. It gradually lowers to reach its minimum height over spaces like cold storage rooms.

By minimising the volume where possible, the architects aimed to increase the efficiency of insulation, temperature and air control in the building.

Other factories from Dezeen’s archive include a sunken prosciutto factory in the Italian countryside and a Tesla windscreen factory in Peru featuring fluted and coloured glass fittings.

Photography is by Alp Eren.