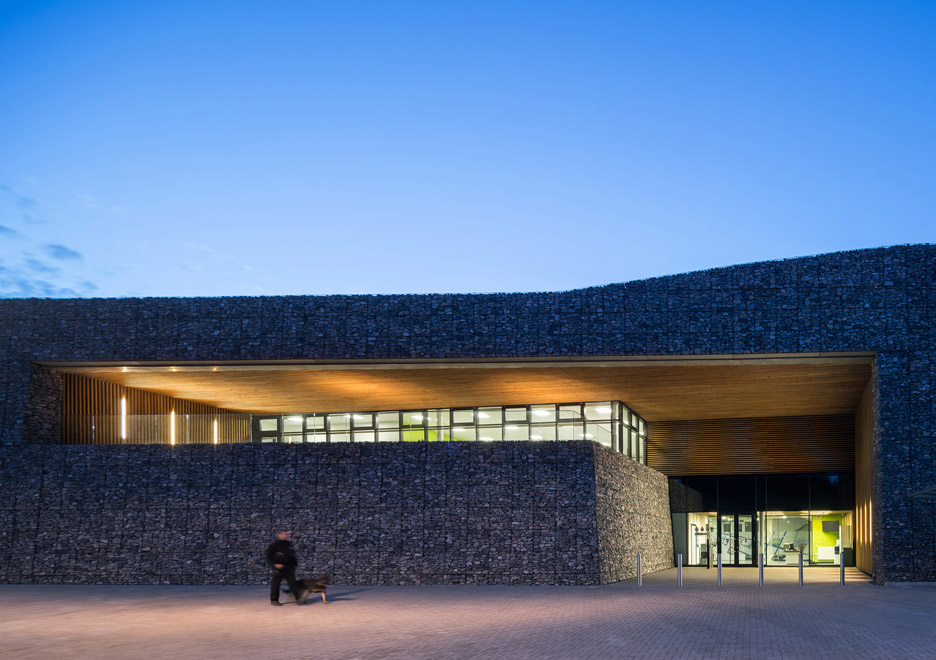 Stone-filled gabions provide the walls of this police training centre by architecture firm Haverstock, helping it camouflage with the craggy walls of a former quarry in Bristol, England (+ slideshow).

The Blackrock Police Training Centre was designed by London-based Haverstock to provide specialist training facilities for the local police force, including two fire ranges and tactical training facilities, as well as offices and classrooms.

The building is intended to mimic the form of a rocky cliff to its rear. Gabions form the facade, and were hand-filled with stones to match the quarry walls.

“Designing a substantial police training facility that blends seamlessly into the base of a wonderful disused quarry was a unique challenge that required an unusual approach – perceiving the building as an integrated part of the landscape,” said the team, who are also working with AHMM on the new Scotland Yard headquarters in Whitehall.

“The building emerges as an irregular form echoing the geometry of the quarry workings,” they added.

The quarry is home to several Peregrine falcons, so the construction works had to be fitted around the birds’ nesting season to minimise disturbance to their habitat.

Acoustic insulation in the walls of the building will dampen noises from the shooting range within, so as not to scare off the birds of prey.

A grass roof was also added to help the building blend further with the rugged environment as it ages.

Inside, the indoor ranges and abseiling training area are ventilated through a large slatted timber soffit.

“The training facilities are designed to be simple, practical, safe, secure and robust whilst the front of house and admin spaces have a richer palette of materials and a more refined aesthetic,” explained the architects.

“The result of the consultation and the unusual design approach is a simple and elegant building that complements the natural beauty of the quarry whilst providing highly specialist facilities,” they added.

Shooting events at the 2016 Olympic Games in Rio will be held in a concrete and timber complex in Rio, while the London 2012 Olympic games were held in shooting galleries covered in spots that look the suckers of an octopus’ tentacles and a firing range with a spiky outline based on a maple leaf was created for the 2015 Pan American Games in Toronto.

Photography is by Simon Kennedy.