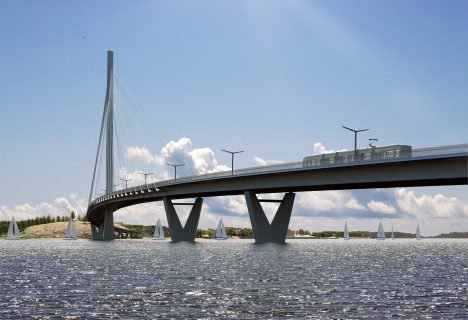 UK firm Knight Architects has revealed its plans for a bridge that will span over a kilometre across a bay in Helsinki, making it the longest bridge in Finland (+ slideshow).

The €259 million (£223 million) crossing will stretch 1.2 kilometres across Helsinki’s Kruunuvuorensilta bay, linking the city centre with the new Kruunuvuorenranta housing development, as well as the zoo.

A huge diamond-shaped pylon will support the centre of the gently arcing bridge.

Cable stays will be tensioned from the upper part of this structure, while the base will elevate the walkway and tram tracks above the water. The diamond shape is intended as a reference to the royal ownership of the bay area.

“This will be a high-quality, lasting piece of infrastructure, which will be instantly recognisable and synonymous with Helsinki,” said architect Tom Osborne.

“The distinctive form of the central 135-metre pylon of the symmetrical cable-stayed design is a tall slender diamond, with multi-faceted surfaces designed to catch light and shadow both by day and night.”

Knight Architects was founded by architect Martin Knight in 2006.

Knight’s past projects include a London footbridge that opens and closes like the blades of a traditional hand-held fan, and he also worked on the Royal Ballet School’s Bridge of Aspiration while at previous firm Wilkinson Eyre.

Construction of Kruunusillat is expected to begin in late 2018, with the bridge opening to the public in 2025.