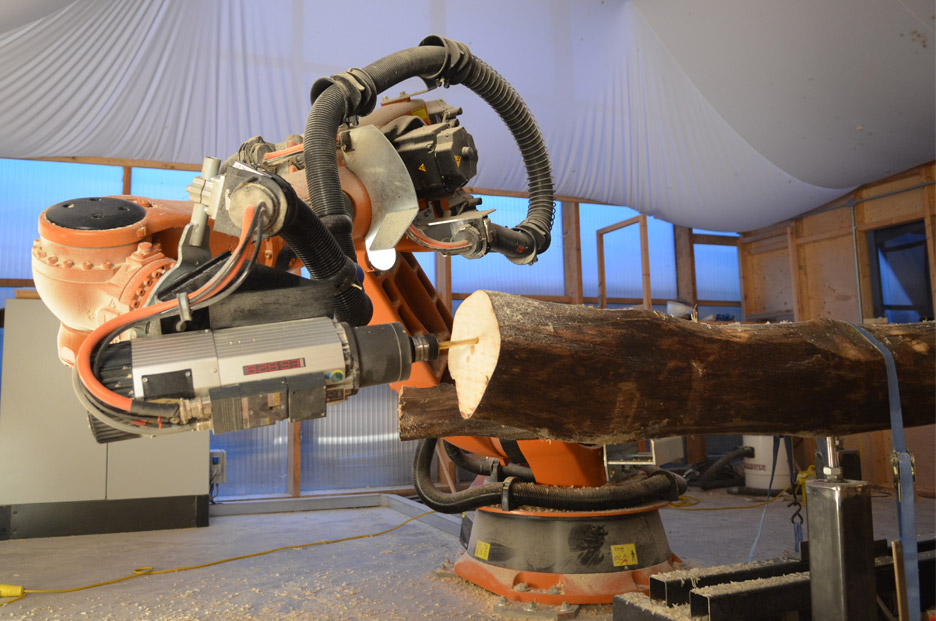 London’s Architectural Association has released a film showing its first major foray into robotic construction, and has revealed it will this year launch a new course focussed on digital fabrication (+ movie).

Students from the AA School’s Design & Make programme used robotic fabrication for the first time earlier this year in the construction of Woodchip Barn.

The success of this project led to the development of a new MSc course, also called Design & Make, which will focus on robotic technologies and their application in timber construction.

“We are making robotics core to the research we do here, and believe there is particular potential in the application of natural forms in architecture, especially in combination with 3D-scanning technologies,” he told Dezeen.

Starting this autumn, the 12-month residential MSc programme will run in parallel with the existing 16-month MArch Design & Make course, which takes place at the school’s woodland research facility in Hooke Park, Dorset.

It taps into the current trend for robotic construction, pioneered by researchers at the University of Stuttgart and ETH Zurich, and championed by architects including Wolf D Prix and BIG’s Kai-Uwe Bergmann.

Students on the course will make use of a robotic arm housed in Hooke Park’s Big Shed workshop – a fabrication hall constructed by students back in 2012.

The robot is a reconditioned Kuka KR-150 with a reach of 2.7 metres – the same type of industrial arm being used by architect and researcher Achim Menges to develop a carbon-fibre pavilion for London’s V&A museum.

The arm has a lathe-like mount that is digitally controlled. It will be used to investigate robotic routing to join non-standardised lengths of timber, such as irregularly forked tree branches.

“By combining the capabilities of robotic machining with 3D scanning and parametric design tools, new opportunities are being explored in which the inherent geometric form and structural qualities of wood are directly applied in architectural structures,” said Self.

Woodchip Barn is the latest in a series of annual structures built by students from the course using timber from the surrounding woodland.

To build it, wood harvested from Hooke Park was 3D scanned to determine its inherent strength, before being milled to form interlinking connections using the robotic arm.

“The rationale for this approach is that the diverse characteristics of local material can be exploited directly without wasteful industrial processing to first standardise and then add variation back to the component geometries,” added Self.

The Design & Make programme is co-directed by Self, who is also the founder, and Emmanuel Vercruysse, who joined the school in 2015. The robotics facility is being run and developed by Pradeep Devadass, a graduate of the school’s Emergent Technologies programme.

Self was previously a member of Arup’s Advanced Geometry Unit and worked on the 2005 Serpentine pavilion by Álvaro Siza and Eduardo Souta de Moura, which he describes as the world’s first robotically fabricated building.

Vercruysse previously led the Bartlett School of Architecture’s Robotics and CADCAM research lab. He is also co-founder of art practice Liquid Factory, robotics group RAVEN and is a member of the design collective Sixteen Makers.

The Design & Make programme is supported by the Bristol Robotics Laboratory at the University of the West of England and the government-funded Knowledge Transfer Partnership scheme.

Past students on the annual building programme have created a suspended cocoon made from planks of timber, a translucent pyramid and a wooden burrow.

Video is by Pradeep Devadass and Zachary Mollica.