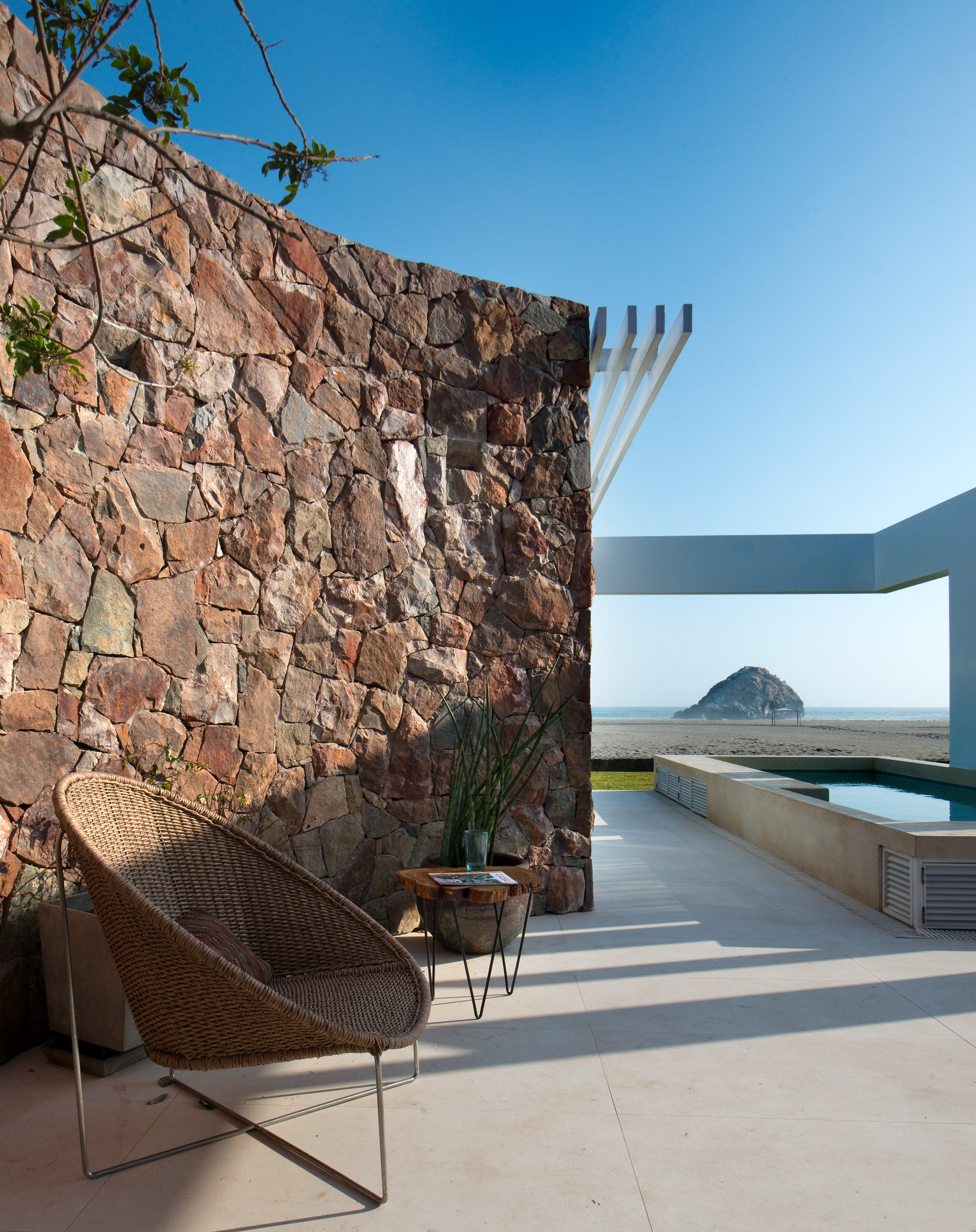 To build this seaside house in Peru, Lima-based architect Marina Vella sourced stone from a nearby mountain.

Casa Ronda is located on the coastline in Cañete, a province in Lima Region. One side of the site faces the Pacific Ocean, while the Cerro Colorado mountains, known as Red Hill, rise up behind the plot.

Vella, founder of Marina Vella Arquitectura Urbanismo, decided to highlight both of these aspects in her design.

Using red stones sourced from one of the mountains, a curved wall was built in the centre of the residence. It wraps a small courtyard, protecting it from coastal winds.

Furnished with a curved sofa and a dining table, this circular patio leads though to a private swimming pool. This pool is enclosed by the building’s white, 2.9-metre-high exterior walls, but a large opening frames a view of the ocean beyond.

To comply with local building regulations, the red stone wall doesn’t extend out beyond the building’s white facade.

“Strict building regulations that specified heights and materials, including a white palette, had to be dealt with,” said the design team. “We had to comply with them and the personal expectations of the family that dreamt of an organic architecture with cozy gathering areas.”

“By using this natural rugged red stone, and placing it in the centre of the house, the strict building regulations are fulfilled,” they continued, “lineal white for the house and the semi-circular organic wall wrapping spaces in colour, visually becoming part of the Red Hill and a protection from the wind.”

The stone wall is left exposed inside the house, with its reddish hues contrasting the white-painted partition walls and pale stone flooring.

Stone steps are suspended from metal poles around the structure, forming a staircase that leads down to three bedrooms in the basement. The stairwell is lit by a narrow skylight that separates the ceiling, while the hall surrounding it is lit through circular skylights.

As the wall curves, it cuts through the corner of the open-plan living and dining room on the ground floor. This is situated alongside the pool and also boasts a large window facing the ocean.

The kitchen, master bedroom and a second bedroom also occupy the ground floor.

Vella isn’t the first Peruvian architect to choose mountain rubble for a building. Lima-based architect Rafael Freyre used stones from surrounding mountains to build a house on the edge of a desert.

Other contemporary houses in Peru include a countryside residence comprising three cantilevered volumes clad in perforated Corten steel and a house with a bold orange staircase.

Photography is by Gonzalo Cáceres Dancuart.