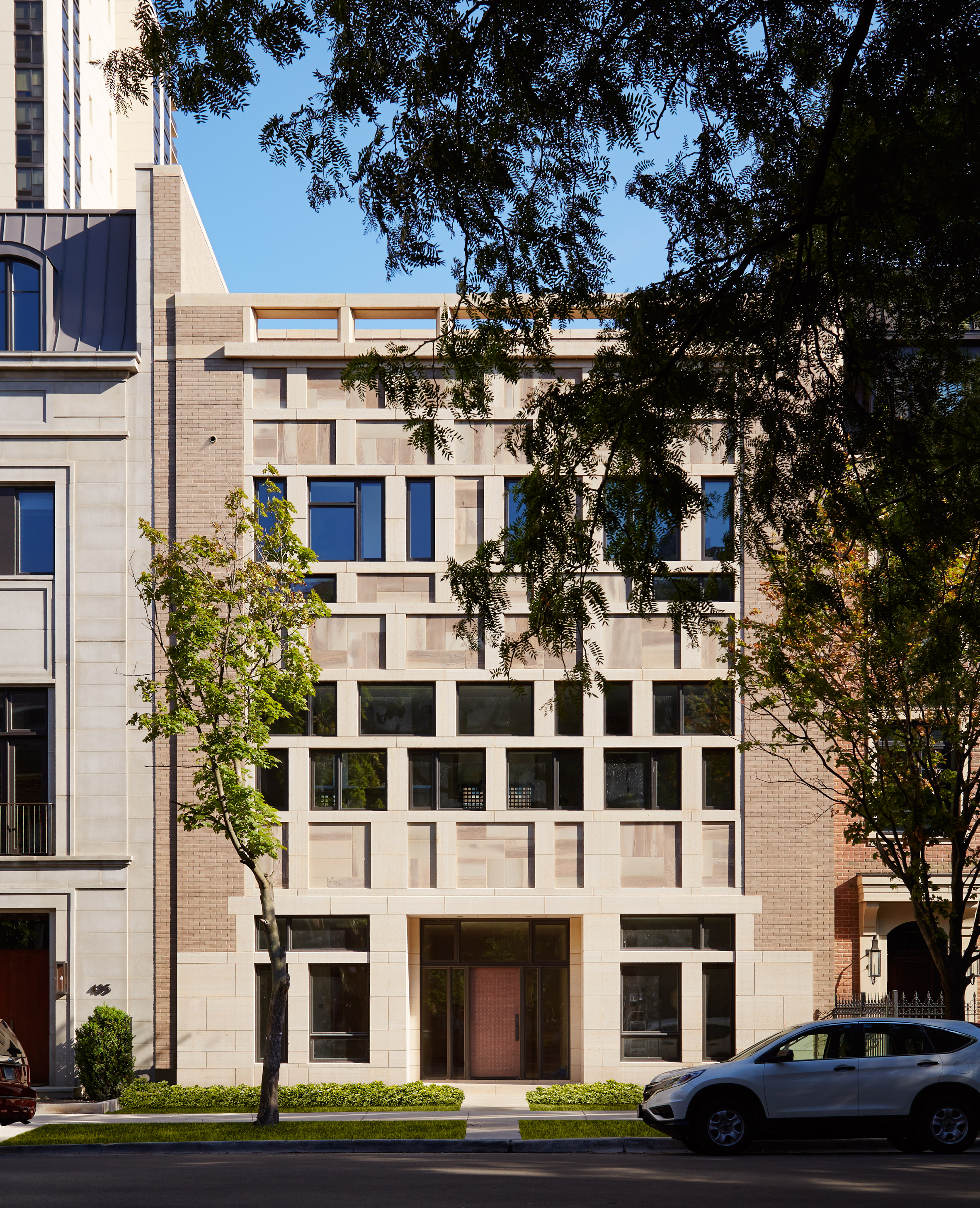 The private residence, located on Chicago’s North Side, is part of a mixed-used development that includes a tower, a multi-level parking garage, private townhouses and a shaded park for residents.

The townhouses, designed by a range of architects, had to conform to structural and volumetric guidelines, but could vary in style. In response, local firm HBRA Architects conceived a four-storey townhouse that features traditional materials and a contemporary aesthetic.

The team drew inspiration from Chicago’s prestigious lineage of urban residences, including the Charnley-Persky House by Sullivan and Wright, and the Glessner House by Richardson.

The design is meant to reconcile the character of the conventional Chicago streetscape and the client’s desire for a modern home. “While many of its neighbours adopt various revival styles for their expression, this house demonstrates a distinct architectural grammar that is at once modern and compatible with its setting,” the firm said.

The facade consists of a tan-coloured patchwork of limestone, sandstone and brick, along with windows of different sizes. The entrance is slightly recessed and features a mahogany door framed by glazing.

“The house’s ordered, lively facade terminates a cross-street, its deep and varied window openings providing both a sense of enclosure and an engagement of the street with the life within,” the studio said.

Encompassing 7,011 square feet (651 square metres), the home accommodates a family of four. The interior layout is defined by open planning and conventional cellular spaces – a configuration that is meant to be straightforward and easily navigated.

The ground floor contains a home office, an exercise room and a garage. The kitchen, dining space and living room were placed on the second floor. They open onto a rear garden, which in turn connects to the development’s semi-private park.

All of the bedrooms were situated on the third storey. The roof has a central volume containing a small solarium and workspace for gardening activities.

The volume is bordered on both sides by terraces – one for growing edible plants, the other for relaxing and entertaining. “Continuing upward through a top-lit stair hall that admits daylight to the core of the house, one arrives at the twin roof gardens,” HBRA said.

“An elevator is convenient for roof-level entertaining and ensures that the house can comfortably accommodate all visitors, as well as the owners as they grow older,” the studio added.

“The house was built within relatively modest cost parameters when compared with many of its neighbours,” the firm said.

“Its generous proportions and abundant daylight compensating for a lack of elaborate finishes and luxurious materials.”

Other townhouses in the US include a Brooklyn dwelling by Etelamaki Architecture clad in corrugated metal, and a San Francisco residence by Stephen Phillips Architects that is sheathed in black zinc and topped with a curved, mansard-style roof.

Photography is by Hedrich Blessing.