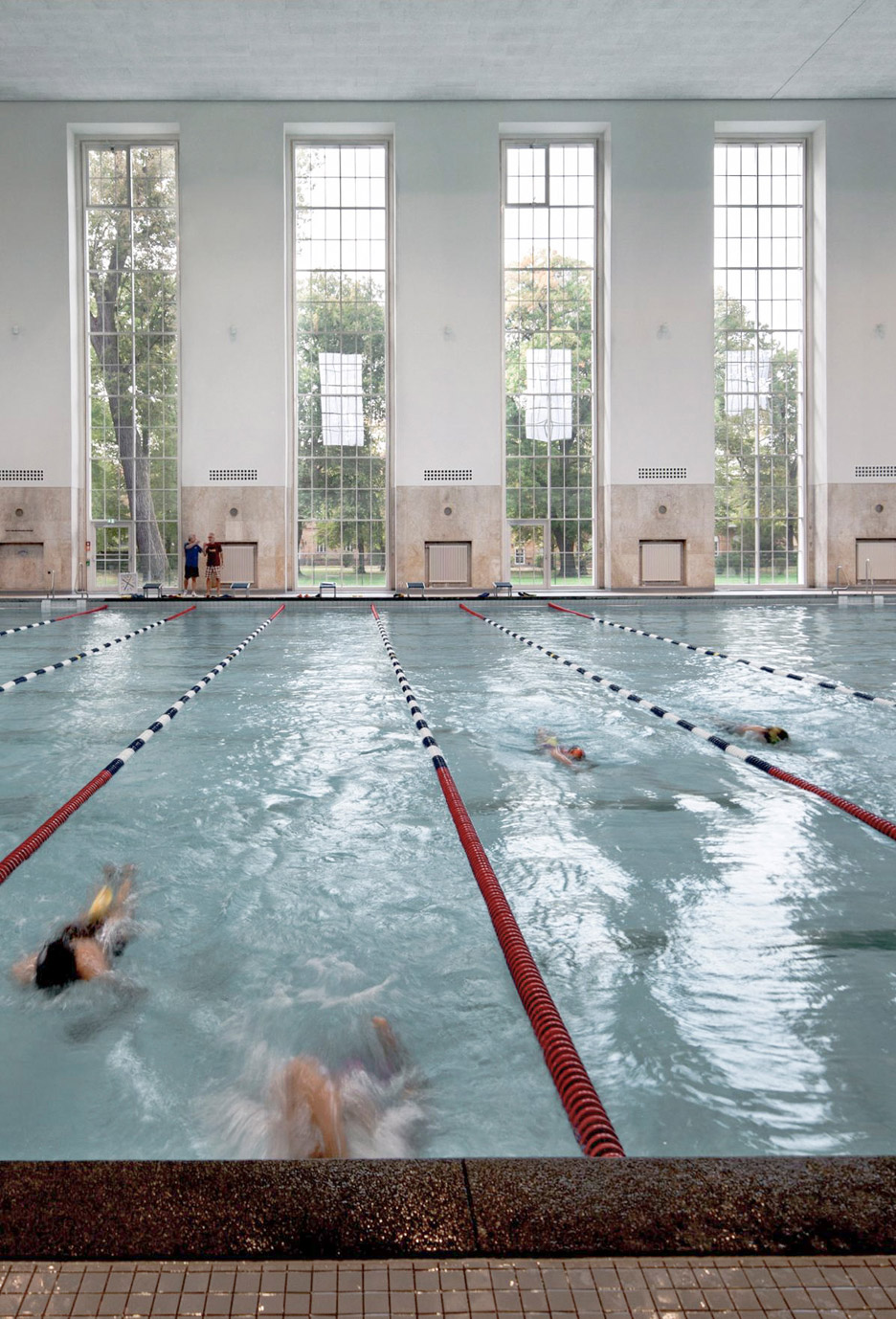 The Schwimmhalle Finckensteinallee is located in the German capital’s Lichterfelde district and originally opened in 1938.

It closed in 2006 due to gradual damage and construction defects, and Veauthier Meyer Architects was engaged in 2009 to oversee its renovation.

The building was constructed on the site of a former cadet school and was originally used as a physical training facility for the SS Leibstandarte – Adolf Hitler’s personal bodyguard division.

Designed by architects Karl Reichle and Karl Badberger in the style favoured by Hitler’s Nazi party, it references Neoclassical architecture in its proportions.

It also features relief sculptures flanking the entrance, which were restored as part of the renovation process.

Built around a pool measuring 50 metres long by 25 metres wide, the competition-standard complex was the largest and most modern of its kind in Europe at the time of its completion.

Following the second world war, the facility was operated by US allies stationed in Berlin until the German reunification. In 1994 it became part of the Berlin Pools Association and was subsequently used by schools groups and swimming clubs.

The restoration process focused on preserving the existing architectural concept through careful conservation of the main spaces and materials, whilst modernising technical and functional services to ensure they conform with contemporary energy standards.

“The light-flooded swimming hall, with its impressive dimensions and large windows on four sides, is an important architectonic document of the negative period in which it was built,” architect Andreas Veauthier told Dezeen.

“The question of the balance between preservation and demolition was partly answered by the demands of our client,” Veauthier continued. “On the other hand, the building is listed and therefore some elements were protected by law.”

The existing external shell was optimised and new windows installed to replicate the original geometry of the glazing that occupied the large openings.

Windows with high thermal insulation were chosen, in keeping with efforts to improve the building’s ecological credentials.

A new roof was added to revive the sense of space in the main hall, which was lost when a suspended ceiling was added in the 1990s. The hall was originally covered by a glazed roof, which is referenced in the forms and colour of the new addition.

The height of the hall was originally required to accommodate a 10-metre diving platform, which was removed during the renovation.

Subsequently, the pool was made shallower and now has a uniform depth of two metres, which helps to reduce its energy requirements.

Colourful tiles added to the changing room zones mark them out as one of the new interventions made to the interior. Elsewhere, existing natural stone and marble surfaces were authentically restored.

The restoration process lasted four years and reports put the total cost at around €12-13 million (£9.7-10.5 million). The building reopened as a public sports pool in September 2014.

In Strasbourg, a dome-shaped swimming pool built in the 1970s has been refurbished and extended to accommodate two additional pools, while blue-painted bleachers and a wooden sun deck were added to a 1950s pool complex in Paris.

Photography is courtesy of the architects.