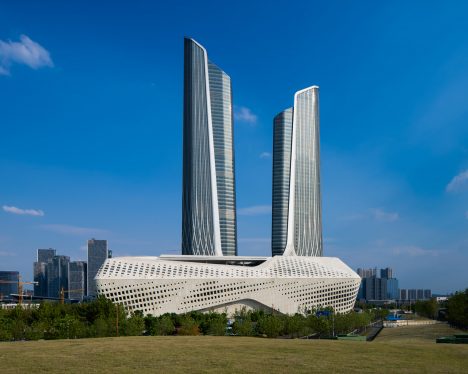 These new photographs reveal a vast cultural complex by Zaha Hadid Architects, which is reaching its final stages of construction in the Chinese city Nanjing (+ slideshow).

It comprises two glazed skyscrapers, which morph out of a perforated concrete base containing conference and events space.

The tallest of the towers is 314 metres, and will contain offices and a five-star hotel across its 68 storeys. The shorter one measures 255 metres in height, and has 59 floors that will host a second hotel and conference centre.

“The towers create a dynamic transition from the vertical of the urban CBD to the horizontal topography of the river,” said ZHA.

“This architectural composition juxtaposes the vertical [of the city] and horizontal [of the river and landscape].”

A conference hall, concert hall, events space and dedicated VIP zone will be set in separate blocks around a courtyard at ground level.

The blocks conjoin to form a single volume above ground, with the whole structure covered in fibre-reinforced concrete panels.

The bases of the two towers are covered in the same concrete panelling, but this gives way to a vein-like pattern that stretches up the glazed facades to their slanted roofs.

“At the interface between tower and podium, the glass facade gradually transforms into a grid of rhomboid fibre-concrete panels, giving the large surfaces of podium and conference centre a solid and sculptural appearance; underlining the dynamic character of the form and providing daylight to the building’s interior,” said the studio.

Nanjing International Youth Cultural Centre is one of over 30 projects that were under development by at the time of studio founder Zaha Hadid’s death earlier this year.

Last week the studio, which is now being led by Hadid’s former partner Patrik Schumacher, unveiled its completed Port House in Antwerp.