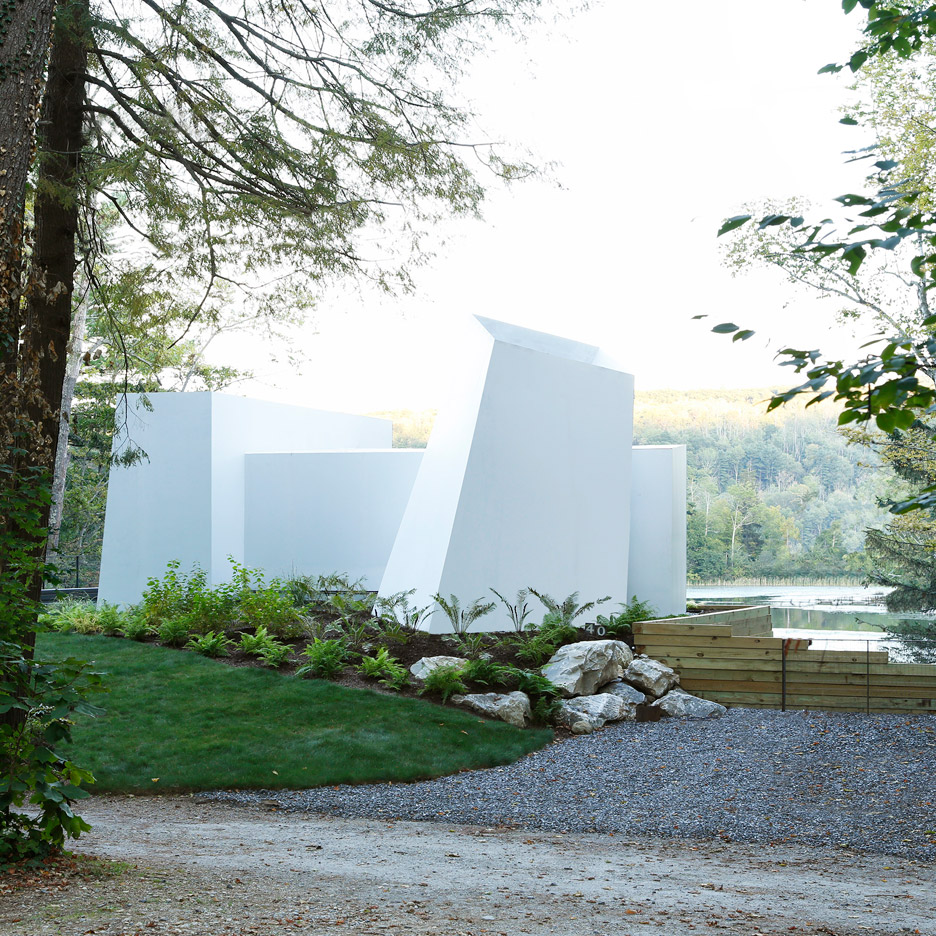 This lakefront weekend home in Massachusetts by Taylor and Miller Architecture and Design features protrusions that gesture toward the sky and water (+ slideshow).

Called Lake House, the sculptural two-storey dwelling was designed by Taylor and Miller as an abstract composition of volumes and forms.

It encompasses 1,650 square feet (153 square metres), and was designed to serve as a country retreat for a Manhattan-based designer and musician.

The home is built into a sloped site in the Berkshires, a hilly region in western Massachusetts that is dotted with quaint villages. It is surrounded by trees and overlooks a lake.

“This residence maintains a dualistic relationship with the lake against which it is nestled,” said Taylor and Miller.

“When seen from the street, the house is abstract in form, showing no aperture or puncture. As one steps down the walking path and toward the lake, however, the house opens itself up.”

A single stacked timber wall serves as both the retaining wall for the landscape and as the primary enclosure for the home.

The protrusions are made of bonded aluminum.

On the exterior, the upper portion of the house consists of three, white volumes of varying heights. The largest volume, which is rectilinear, contains a master bedroom.

A more sculptural volume is hollow and is topped with a skylight. It brings natural light to an entry vestibule on the lower level.

On the lower level, the architects surrounded windows and other openings with large, white frames – referred to as “sleeves” – that protrude from the building envelope.

The sleeves, made of aluminium, gesture toward the lake.

“A series of sleeves act as spatial leaks, breaking through the timber and allowing the interior spaces to reach out to the lake in the form of very specific views,” described the firm.

“Each of these types of spaces is defined differently in their materiality,” explained the firm.

The firm used hot-rolled steel in the kitchen, rusted steel for a stair, and plywood for the skylight.

“Moving through the home, these vertical spaces provide a kind of cinematic ‘hard cut’ that interrupts the modernist notion of continuous flowing space as they present themselves between the horizontal spaces of more neutral character,” said the firm.

Founded in 2002, Taylor and Miller Architecture and Design is a multidisciplinary studio focused on architecture, lighting design and fabrication. It is based in New York, with workshop facilities in the Berkshires.

Photography is by Studio Dubuisson.