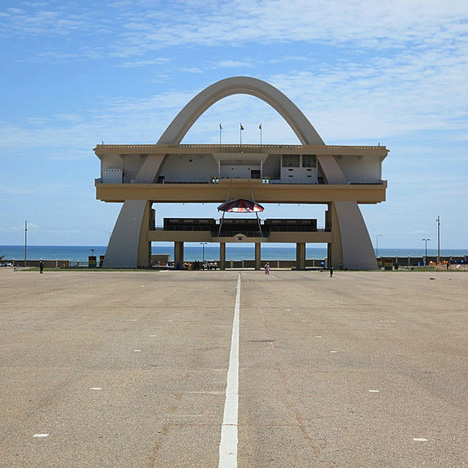 Our 10 must-see exhibitions opening around the world in 2015 include showcases of African architecture, Postmodern design and “definitive” bicycles.

A retrospective of the work of late British fashion designer Alexander McQueen will be expanded with 30 additional garments from its previous edition at New York’s Metropolitan Museum of Art.
More than 200 of McQueen’s ensembles and accessories are included to demonstrate his innovative tailoring techniques, intricate detailing and use of technology, in sections designed to echo his theatrical catwalk presentations.

Countries and corporations are enlisting world-renowned artists and architects to construct pavilions at a dedicated site in Milan, following on from a similar event that took over a vast expanse of land in Shanghai in 2010.
Names already confirmed for the 2015 event include Daniel Libeskind, Carlo Ratti, Vo Trong Nghia and Wolfgang Buttress. See the pavilion proposals we’ve published so far »

The first exhibition devoted to David Adjaye will showcase the British architect’s projects and design approach “through a historical understanding of context and a global understanding of Modernism” at this retrospective in Chicago.
Adjaye is hotly tipped to design Barack Obama’s presidential library, and Chicago is one of the cities most likely to receive the building. Read more about the competition to host President Obama’s library »

Another first-ever retrospective will celebrate the back catalogue of British industrial designer Jasper Morrison.
Furniture, kitchenware and home electronics from Morrison’s 35-year career will be accompanied by archive material in a specially designed installation that mirrors his minimal style.

London’s Design Museum will explore the cycling phenomenon currently hitting the UK’s streets, from the craftsmanship that goes into the creation of each design to the culture surrounding their users.
A range of “definitive” bicycle designs are to be showcased, from those used by everyday commuters to models ridden by Olympic athletes.

The 20-year career of eccentric Icelandic musician and artist Björk is to be chronicled through sound, film, visuals, instruments, objects, costumes and performance.
Both biographical and fictitious, the installation at MoMA will feature collaborations with photographers, fashion designers and artists, and is set to culminate in a newly commissioned, immersive music and film experience.

Postmodernism from a Finnish perspective during the years between 1980 and 1995 will be highlighted in Helsinki, as part of an exhibition spanning architecture, design, popular culture and the arts.
Work by Finnish designers Stefan Lindfors, Leena Luostarinen, Rita Taskinen and Vesa Varrela will be displayed alongside products by international names such as Aldo Rossi, Nathalie du Pasquier and Philippe Starck.

The Modernist architecture built in central and sub-Saharan African countries after the fall of colonialism in the 1960s will be examined at Vitra’s Frank Gehry-designed museum.
Featuring a substantial contribution by photographer Iwan Baan, the exhibition will document over 50 buildings in countries including Kenya, Ivory Coast, Zambia, Ghana and Senegal.

The Louisiana Museum of Modern Art in Denmark is also drawing focus to African architecture, with a dedicated Africa exhibition as the third chapter of its series Architecture, Culture and Identity.
It will present various ways of living from across the African continent, focusing on the intersection of architecture, contemporary art and culture.

The Royal Academy in London will present a landmark exhibition of renegade artist and Honorary Academician, Ai Weiwei – the first significant British survey of his artistic output.
Major works including architectural collaborations and installations that span the career of the Beijing-based artist – who remains closely monitored by the Chinese government – will be included along with new work.