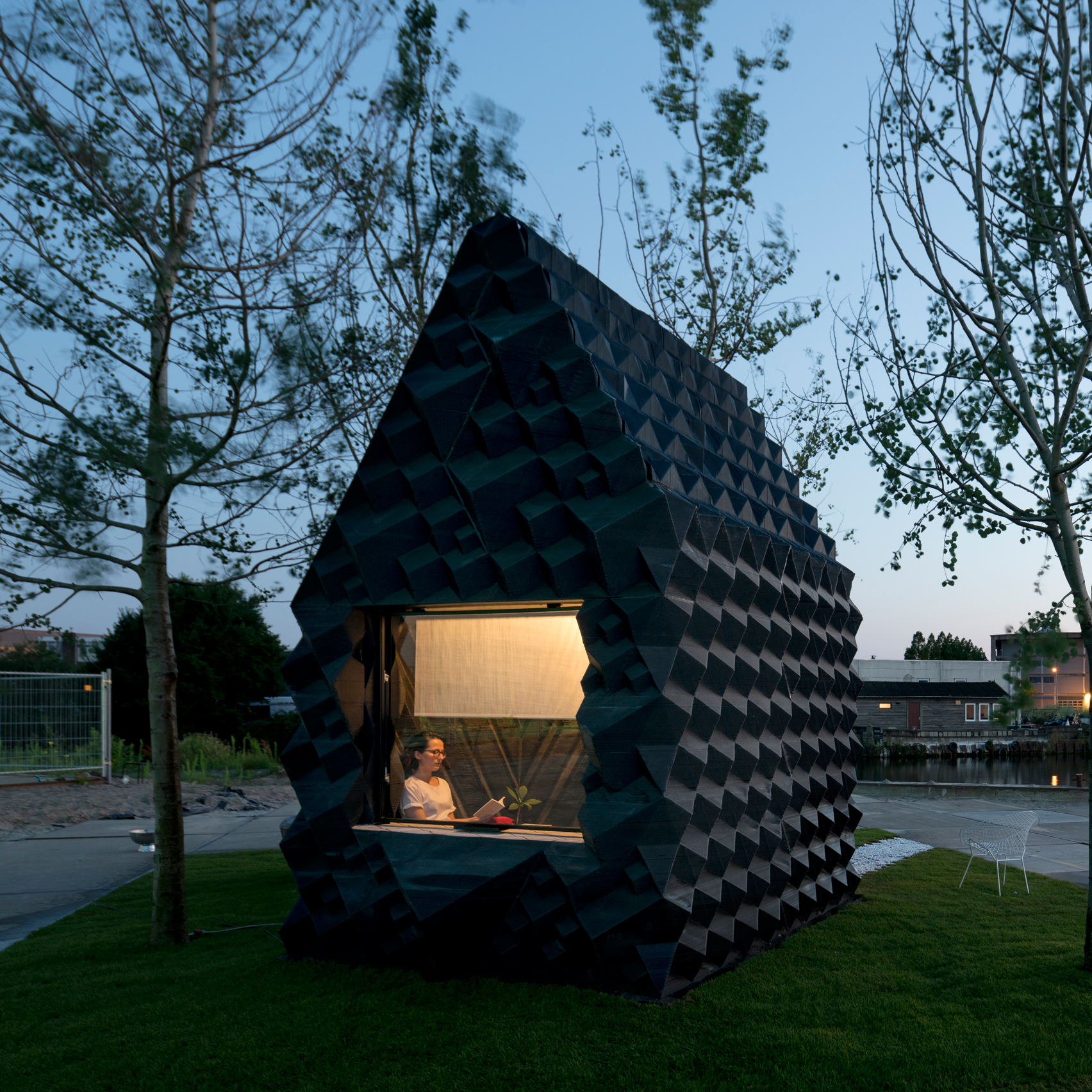 10 of the best micro houses of minuscule proportions

Feeling the urge to downsize? Take lessons from 10 of the best micro homes – including a cloud-shaped holiday home and a 3D-printed urban cabin.

To offer a solution for temporary housing, DUS Architects used bio-plastic to 3D print this eight-square-metre cabin. When it is no longer needed, the structure can be destroyed and almost all the materials be reused.

“The building is a research into compact and sustainable dwelling solutions in urban environments,” said the Dutch studio. “3D-printing techniques can be used particularly well for small temporary dwellings or in disaster areas.”

Find out more about the 3D Print Urban Cabin ›

Studiomama used custom-made plywood furniture to pack a fold-out bed, a standing desk and extendable dining benches into this 13-square-metre residence – which lays claim to the title of London’s smallest house.

“A tiny space like this has to be designed like one would design the interior of a caravan or boat,” said studio co-founder Nina Tolstrup. “Everything has to be custom designed as there is not room for any off the shelf furniture, which was a great challenge.”

Find out more about the 13 Square Metre House ›

This charred-timber cabin was designed by DRAA with a 15-square-metre footprint for clients who wanted to keep the cost of the project as low as possible.

“To fit in a budget, the activities required to fulfil within the cabin were explicitly simple: a place to eat, sleep and read for two, everything else is to be offset outside,” said the Chilean architects.

Find out more about the Charred Cabin ›

Raised above a grassy slope on metal legs and clad in grey-painted Douglas fir, this 12-metre-long and 3.5-metre-wide house has just two rooms.

“Depending on the angle it appears small and compact or long and slim,” said Architekturbüro Scheder. “A space continuum with differentiated spatial impressions ranging from narrow and wide, low and high to small and large.”

Find out more about the Small House ›

Also raised on stilts, this tiny seaside home in Kanagawa measures just three by eight metres and has a pair of oversized windows.

“I designed a large opening of the same size as the sea side on the road side in order to keep the view passing through the building in the absence of the owner,” said architect Yasutaka Yoshimura.”It stands between land and sea and became a house as a window to see through.”

Find out more about the Window House ›

Tengbom designed this 10-square-metre wooden house as an affordable and sustainable option for students. It includes a kitchen with green storage cupboards and a loft for sleeping.

“The main issue was to design really smart units with no unnecessary space,” said architect Linda Camara. “Only well-designed space is afforded when designing for small living.”

Find out more about the Smart student unit ›

With a combined area of 26 square metres, these two shed-like blocks offer a petite retreat for the owners. One hut contains a living area, while the other accommodates a bedroom with a small toilet and sheltered outdoor shower.

“The wharf is medieval and assembled with wood,” said the architects, explaining their material choice of recycle wood. “Its identity is kept long beyond the material’s resistance, an identity that allows [it] to change, to replace, keeping all the values.”

Find out more about the Cabanas no Rio ›

Zébra3/Buy-­Sellf shaped this prefabricated holiday home that sits next to a lake in south-west France like a cloud.

“Sleeping in a comic-­style hut […] is a unique urban experience,” said the French designers, who originally designed the structure as an art installation.

Find out more about the Le Nuage ›

The three cross-shaped modules that make up this micro home in Beijing can be flipped around to transform the space. Architect Liu Lubin designed the space to have with just enough room for sitting, sleeping or preparing food.

“When being rotated, the unit of the Micro House will shift its space, which contains all kinds of housing activities, such as resting, working, washing and cooking,” said the Chinese architect.

Find out more about the Micro House ›

It took just four minutes and nine seconds to install this minuscule prefabricated guesthouse on a site overlooking Lake Maggiore in Switzerland.

British architect Richard Horden developed the concept for the Micro Compact Home to create a functional and comfortable home within a 2.6 metre-wide cube.

Find out more about the Micro Compact Home ›

The post 10 of the best micro houses of minuscule proportions appeared first on Dezeen.