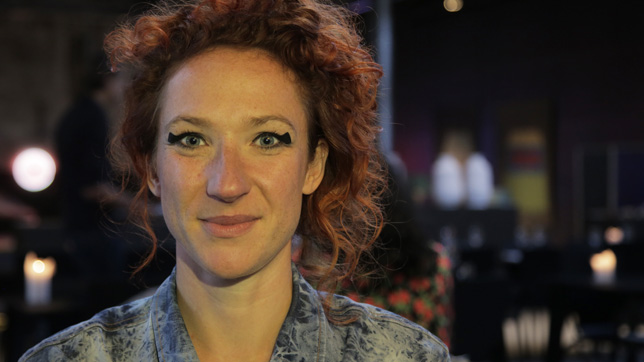 Dezeen and MINI Frontiers: Salomé Galjaard of engineering firm Arup says 3D printing building components will result in more efficient and diverse architectural forms (+ movie).
Salome Galjaard, senior designer at Arup. Copyright: Dezeen
The use of metal 3D-printed structural components will “have a big impact on the visual appearance of the world we live in,” Galjaard says in the movie, which was filmed in Eindhoven during Dutch Design Week 2014.
3D-printed node for a tensegrity structure
The use of additive manufacturing will allow engineers to produce bespoke components using much less material than traditional welding techniques.

This will open up the possibilities for new architectural forms, Galjaard believes.
“If these elements become lighter then all the other elements [in a building] can become lighter as well,” she explains. “It can result in different shapes of buildings. The technique will allow us to create new things, come up with new ideas.”
Structural comparison between a 3D-printed node and a welded one
3D-printed structures are built up layer by layer, allowing engineers to specify exactly where material is needed for structural integrity and where it is not.
Galjaard believes that these lighter components will also lead to more efficient construction techniques. “With lighter buildings you also need less material and there are less transport costs,” she says.
Tensegrity structure by ELV Architecten, which inspired Galjaard’s research. The design will not be built as such. Copyright: Studio i2
Galjaard’s own research at Arup has been looking into how 3D printing could be used to create the steel nodes to hold a tensegrity structure together.
She was working on an irregular tensegrity structure that would have required over 1,000 different variants of these components. The design didn’t actually get built, but if it had each node would have had to have been welded by hand.
Hand-welded node
“It inspired us to look a little bit further,” says Galjaard. “We thought there must be a better way of actually producing these things. That’s why we started looking at additive manufacturing as a way of producing for the building industry.”
3D-printed node for a tensegrity structure
The components Arup has printed so far are still at an early stage of development, but Galjaard believes it won’t be long before the technique could be used in an actual building.

“This is just the first example, it’s not ready to be used in architecture tomorrow,” she says. “But it will be at some point and we think relatively soon as well.”
3D-printed node for a tensegrity structure
Dezeen and MINI Frontiers is a year-long collaboration with MINI exploring how design and technology are coming together to shape the future.
The music in the movie is a track called Family Music by Eindhoven-based hip hop producer Y’Skid.
All images are by Arup, unless otherwise specified.