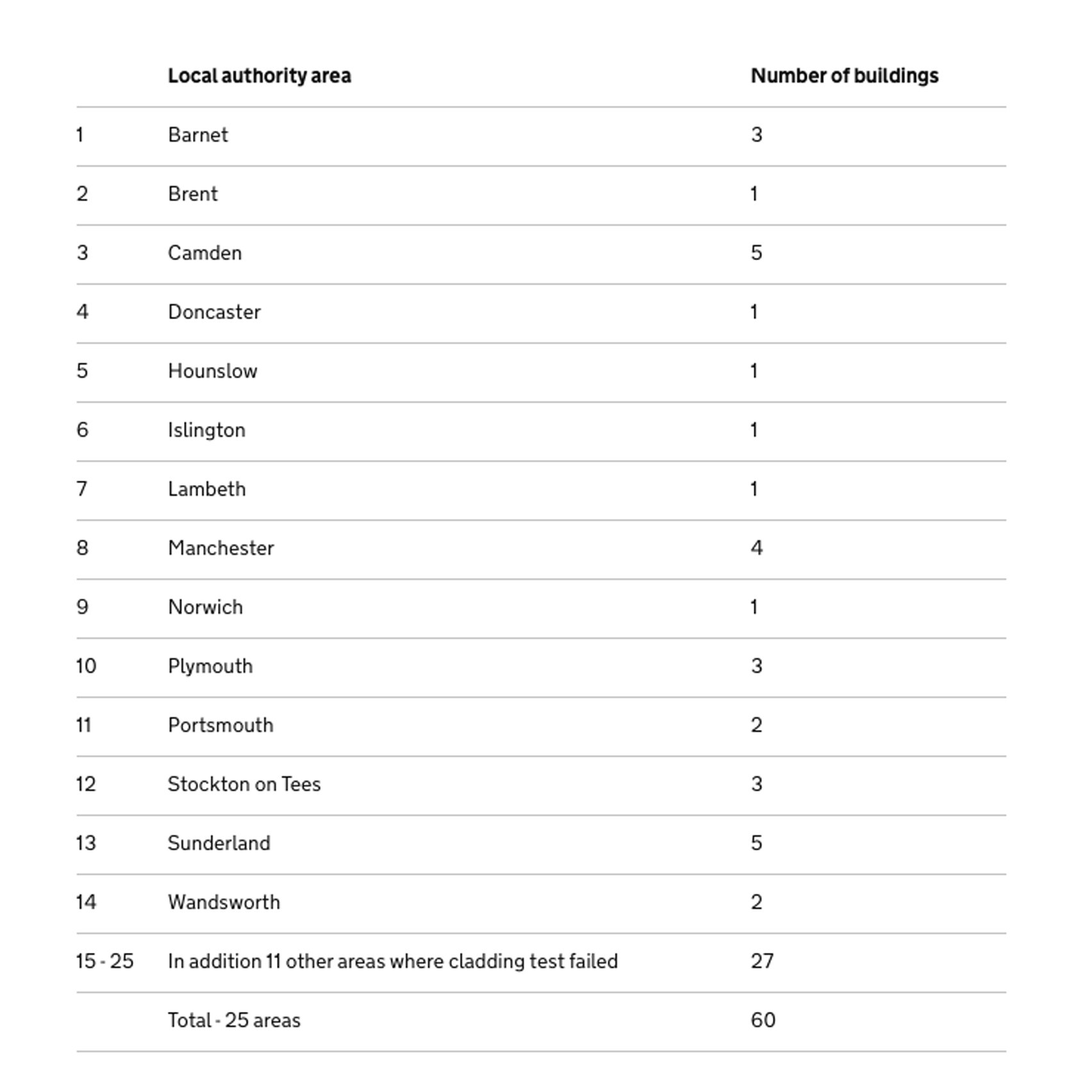 The number of towers that have failed fire safety checks in the aftermath of the Grenfell Tower fire has risen to 60, as the government urges councils to submit cladding samples for testing.

So far, all 60 of the cladding samples submitting for combustibility checks at the Building Research Establishment (BRE) have failed the test. BRE is able to test up to 100 samples each day, but the numbers indicate that samples from just 60 of the 600 towers estimated to be at risk have been submitted.

The 60 high-rise buildings are dispersed across 25 councils, with the highest densities in Camden, Sunderland and Manchester. Further towers have been identified across several other London boroughs, as well as in Plymouth and Stockton on Tees.

“The fact that all samples so far have failed the tests underlines the value of the testing programme we have set up with the Building Research Establishment to get samples checked properly in the laboratories,” said Communities Secretary Sajid Javid.

“It is therefore very important for local authorities and housing associations to continue to submit such samples as a matter of urgency.”

The tests follow the discovery that Reynobond PE cladding with a flammable polyethylene core was used at Grenfell Tower. The cladding is believed to have hastened the spread of fire at the London block, which killed 79 when the blaze broke out on 14 June.

The cladding was added to the 1970s building during renovation works by Studio E Architects and contractors Rydon, which completed last summer.

The cladding supplier, US company Arconic, has announced it is discontinuing sales of Reynobond PE.

“We believe this is the right decision because of the inconsistency of building codes across the world and issues that have arisen in the wake of the Grenfell Tower tragedy regarding code compliance of cladding systems in the context of buildings’ overall designs,” it said in a statement.

Last week a number of councils began to strip cladding from high-rise blocks as a precautionary measure. And on Friday tenants were evacuated from four of the five blocks at the Chalcots Estate in Camden, north London, all renovated by architecture firm HTA.

Rydon was the contractor for both the Grenfell Tower and Chalcots Estate renovations, while Harley Facades was the supplier. Camden council is now seeking legal advice against Rydon, as it evacuates 600 households in the estate.

CEP Architectural Facades – now Omnis – fabricated the cladding for use in both projects. In a statement released on Friday, it pointed out what it sees as key differences in the cladding installation for the two schemes.

“Individually these materials can be integrated into a safe cladding system but certainly we recommend that in high-rise buildings Class O rainscreen panels should only be used in conjunction with a non-combustible insulation material such as mineral fibre.”

Photographs posted by the fabricator show how mineral fibre insulation and specially designed fire barriers helped to contain a fire outbreak at one of the HTA-renovated blocks in 2012.

The Reynobond manual from manufacturer Arconic Architectural Products stipulates that Reynobond PE should only be used on buildings of less than 10 metres – the height a firefighter’s ladder can reach.

Grenfell Tower had 24 storeys and was 60 metres tall.

“As soon as the building is higher than the firefighters’ ladders, it has to be conceived with an incombustible material,” states the manual.

It recommends panelling with a fire-retardant core for buildings of 10 to 30 metres in height, and cladding with a non-combustible centre for towers in excess of 30 metres.