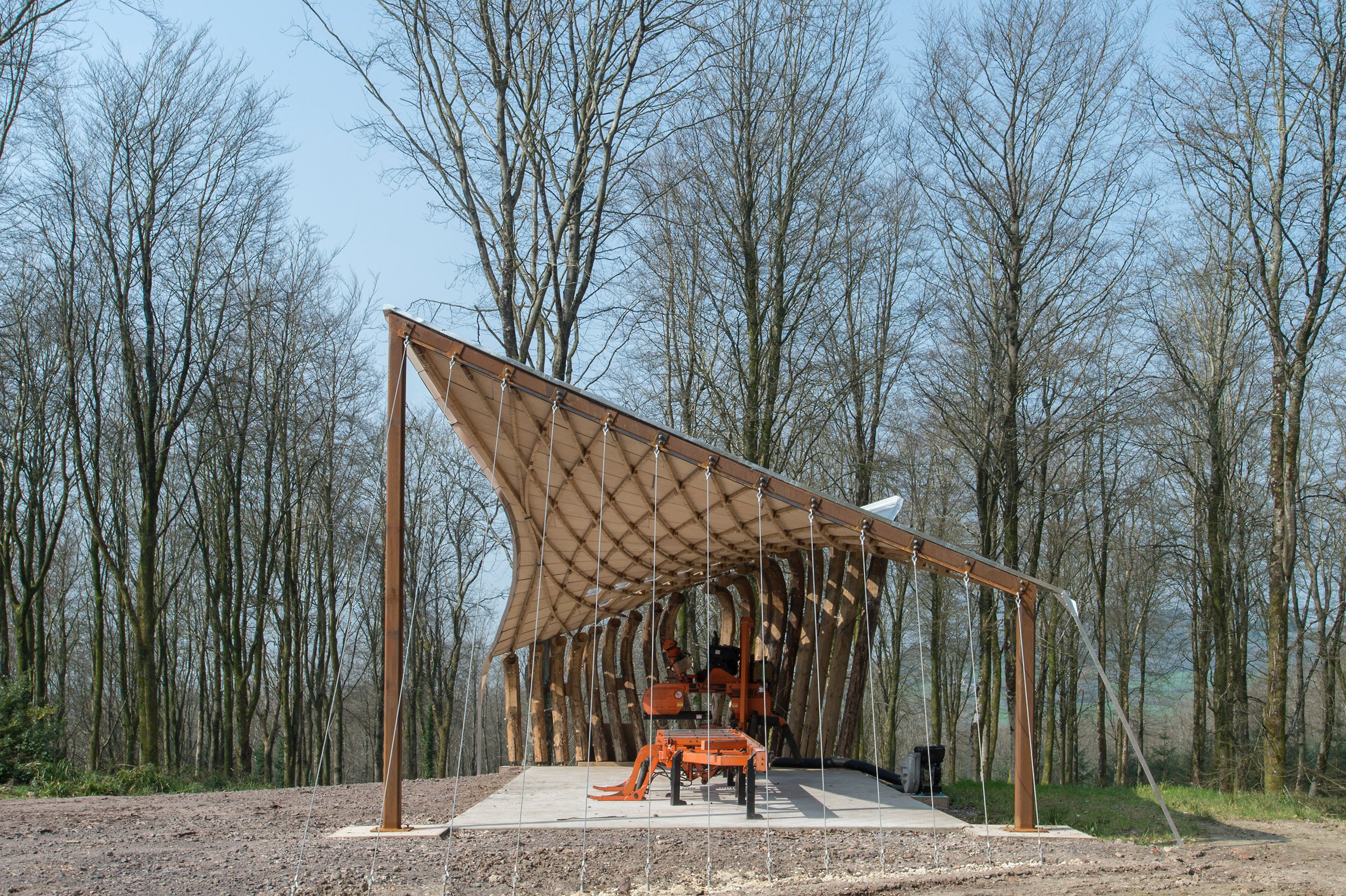 A sculptural, tensile timber canopy has been constructed in Dorset woodland by five students from the Architectural Association as part of the school’s Design & Make programme.

Built on the school’s Hooke Park forest campus in Dorset, England, Sawmill Shelter provides rain cover for the campus’ sawmill and its operator.

However, it also forms part of an ongoing investigation into the potential of lightweight timber construction.

“The canopy forms a test-bed for the experimental prototyping of structural systems that will be deployed in the next planned construction at Hooke Park – a lecture hall and library that will form the academic centre of the campus,” said the team.

“The main investigation was to test the limits of use of timber in tension in the form of an anticlastic surface that can resist both snow loads and wind uplift.”

When designing the shelter, the students had to consider the existing 50 square metre concrete slab, while also catering for the access and movement of the various pieces of machinery.

Using western red cedar harvested from the surrounding woodland, the sculptural canopy is formed of timber laths that span 11 metres over the existing slab.

To remove imperfections these laths have been assembled from shorter sections, using a glued finger-jointed scarfed splice that was developed on campus.

“Each lath carries up to two tonnes of tension, demonstrating the remarkable – and generally under-exploited – strength of wood under tension,” explained the team.

In conjunction with the main investigation, student En-Kai Kuo explored the use of large-scale steam bending of whole trees to create structural columns.

Made from Douglas fir and larch, 18 of these elements are used to support one end of the canopy, standing like tree trunks to help the structure blend in with its forest surroundings.

To assist with load distribution, the elegant formwork is supported by cables and a steel frame at either end, while the roof is clad in aluminium panels backed by CNC-patterned plywood.

The project forms part of an ongoing attempt for the campus to maximise self-sufficiency both in construction material and heat energy. One previous project at the site, Wood Chip Barn, is a space in which the sawmill’s offcuts are stored for use as biomass fuel on site.

Timber is not the only material designers have experimented with to create sculptural formwork.

Earlier this year, University of Stuttgart students used robots to weave a cantilevering carbon-fibre pavilion, while researchers at Bethlehem studio AAU Anastas and ENSA Paris-Malaquais created a lattice canopy made from three hundred pieces of stone.

Photography is by Valerie Bennet, Evgenia Spyridonos and Kevin Kim.