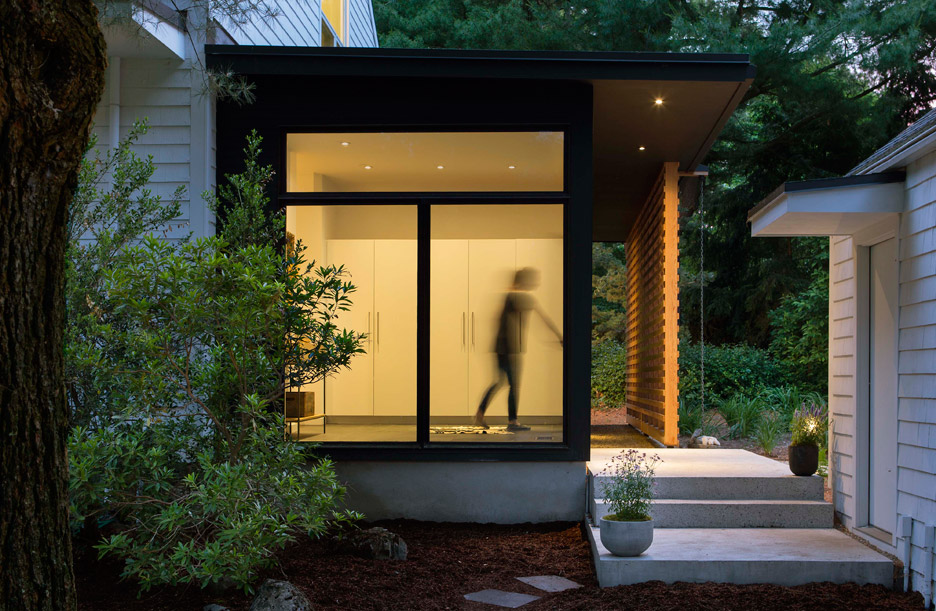 US firm Aamodt Plumb Architects has updated a Massachusetts dwelling made up of old barns that were converted into a single-family home in the 1950s (+ slideshow).

It is located in Lincoln, Massachusetts – a scenic New England town that is dotted with Modernist homes designed by local architects over the past half-century.

The property, which is encircled by woods and farmland, has undergone various reconfigurations over the decades. In the 1950s, local architect Henry Hoover transformed three barns on the site into a Mid-Century Modern home.

Three decades later, in 1985, the home was updated by visual artists Douglas Fitch and Ross Miller.

For the main volume – named the “living barn” – the duo added embellishments to the facade and created a Deconstructivist-style kitchen. The artists also transformed another smaller volume – which connects the garage to the living barn – into an art gallery.

The latest renovation by Aamodt / Plumb does away with the additions from the 1980s.

“The young family that bought the house loved the large windows, generous proportions and connection to the landscape but found it difficult to use the kitchen and gallery space,” said the firm, which has offices in Cambridge, Massachusetts, and Austin, Texas.

The architects were enlisted to “clarify and reorganise these problematic areas,” in addition to refreshing the interior.

Their goal was to combine pragmatism with a minimalist approach. “For renovations, there is a complicated balance between maintaining the original intent of the home, meeting the needs of the home’s new owners, and the desire to do something new and interesting” said firm co-founder Andrew Plumb.

The volume containing the art gallery was completely demolished. According to the firm, removing the later modifications allowed them to reveal the “simple forms” of the three original barns, as well as to incorporate a new entrance – a vestibule with glass walls.

A cedar screen was also added to the front of the living barn, providing privacy while allowing light into the home.

“Floor-to-ceiling glass on the entry side and a fixed wooden screen on the living side make a simple composition that is warm and inviting, as well as being private,” said the firm.

Inside, the architects replaced the “sculptural” kitchen with a new open-plan cooking space, where concrete countertops are paired with glossy white cabinets and large windows that frame views of the landscape.

The living room, located at the centre of the dwelling, features bleached-ash flooring, mid-century furnishings, and aqua and chartreuse homeware. Ample glazing provides views of the verdant back garden.

Upstairs, original cork flooring was coated with a semi-transparent grey stain, giving it a “fresh look”.

The master bedroom suite features two walk-in closets with sliding barn doors made of birch plywood. In the master bathroom, a soaking tub sits beneath a sloped roof with a skylight.

Aamodt Plumb Architects was founded in 2007 by Mette Aamodt and Andrew Plumb, who met while studying at Harvard’s Graduate School of Design.

Other recent residential projects in New England include a Boston home by Anmahian Winton Architects clad in pale wood and dark zinc, and a dwelling in Cambridge by Italian architects Alessandro Armando and Manfredo di Robilan.