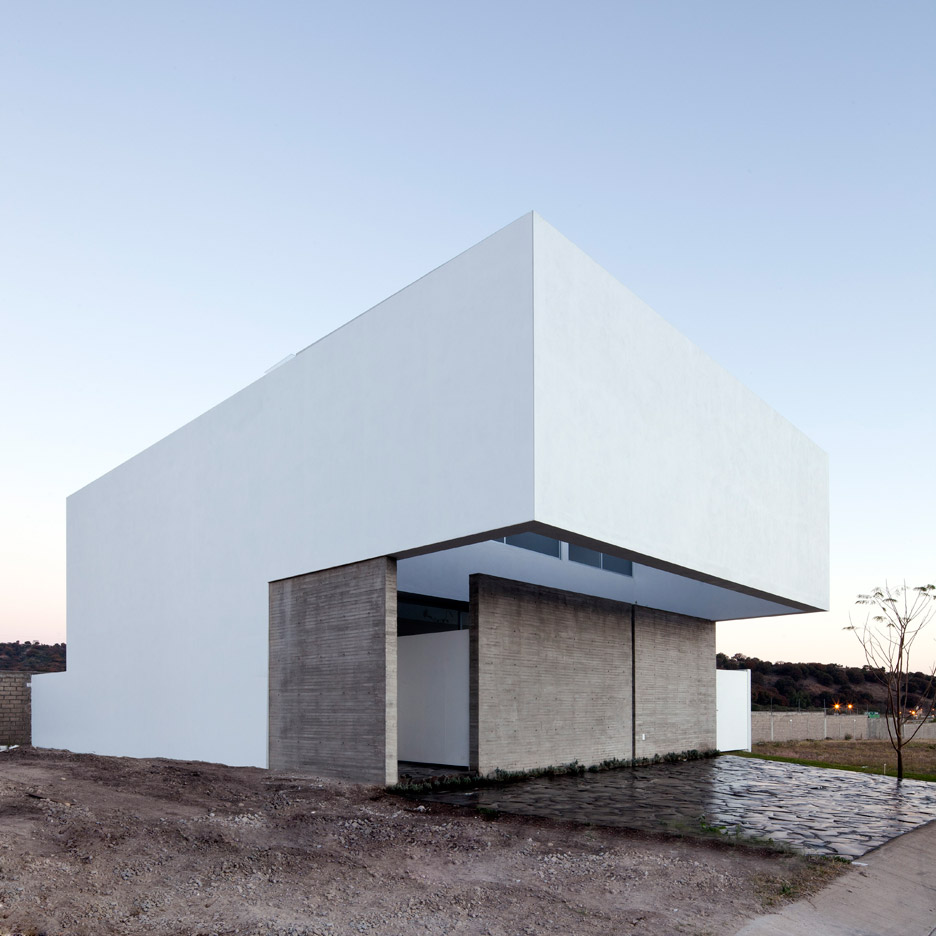 A white-rendered concrete screen extends from the upper floor of this house near Guadalajara, Mexico, blocking views to the street but framing a perspective of the garden and sky (+ slideshow).

Local architect Abraham Cota Paredes and his studio designed the seemingly windowless House to the Sky for a neighbourhood on the edge of Guadalajara’s Spring Forest.

It features a top-heavy form, which created space at the front of the building for a secluded courtyard.

First-floor windows also face down onto the space, but are screened behind the upper wall.

“The house expresses the search for an introspective architecture, an architecture that envelopes itself, where privacy is the best gift,” explained Cota Paredes.

“The project is an evolution of the concept of the screen wall, an idea arising from the exercise of homes in gated communities, where the search for privacy and wealth of interior space cause a mechanism of introspection.”

The slender garden stretches out across the front of its glazed living room. Thanks to its position on the eastern side of the building, its benefits from the warmth of the morning sun.

“The perimeter walls extend towards the front, cantilevering over the garden and the garage, locking the house in itself, forcing the user to look up at the sky and discover the relationship with the garden on the ground floor,” said Cota Paredes.

“The house catches you from when you cross the threshold of the screen wall floating on the garage, you are surrounded by an architecture that seems to envelop you.”

A staircase hidden between a pair of walls divides the living room from the kitchen at the back of the ground floor, and the master suite from two further bedrooms on the first floor.

The master bedroom, its en-suite bathroom and a sitting room are located behind the screen at the front of the house, while two further en-suite bedrooms are positioned behind.

“To provide privacy, a concrete screen wall prevents us overlooking the street and garages, creating an indoor garden that becomes the heart of the house,” said the architect. “Thus producing a kind of open pavilion surrounded by green.”

Other Mexican houses featuring unconventional courtyards include a home by T38 Studio with a garden screened by a series of black stucco volumes and a concrete residence by 3archlab with its private garden squeezed between the building and a cliff.