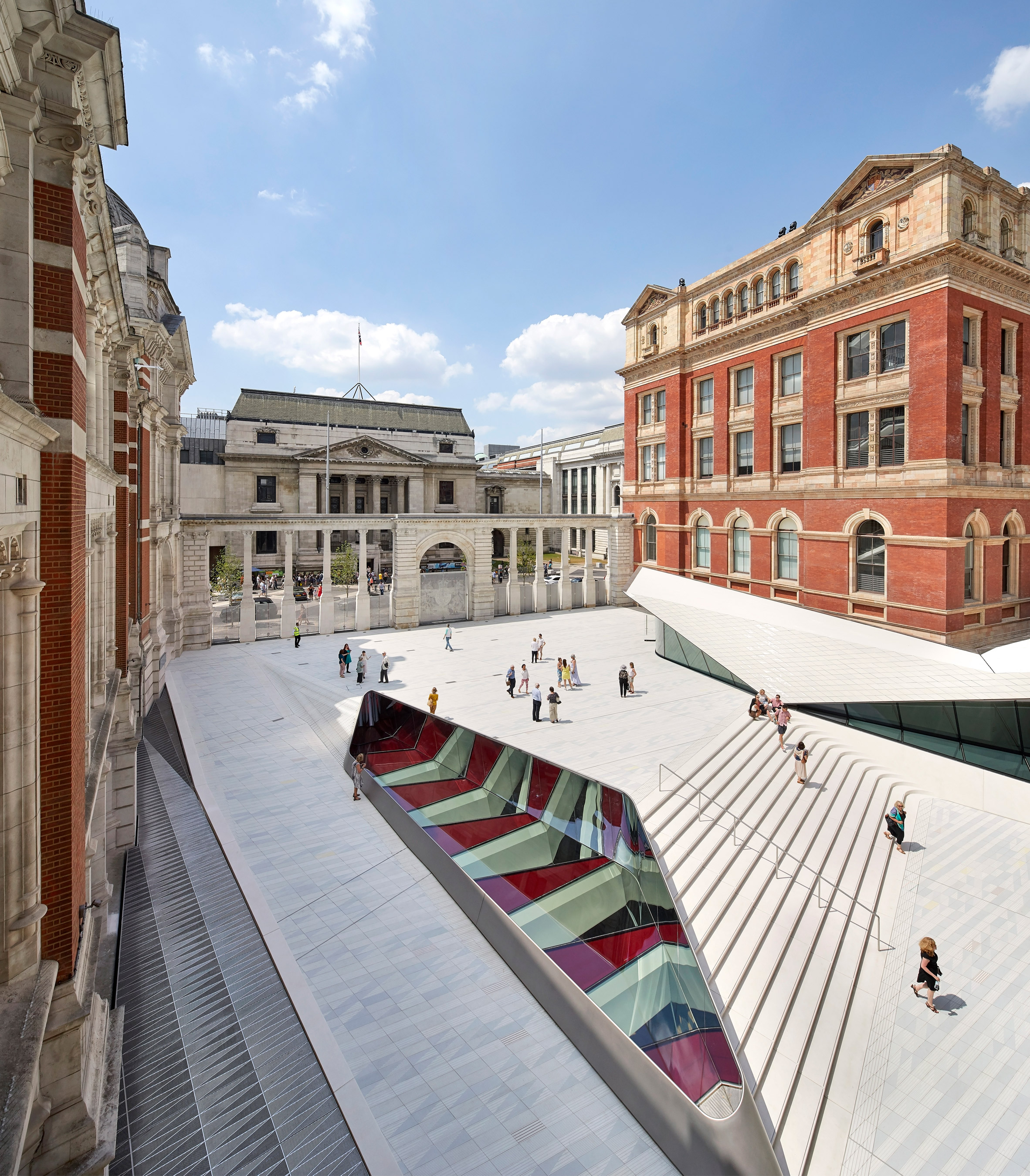 Stirling Prize-winning architect Amanda Levete and her firm AL_A have completed a new porcelain-tiled entrance and underground exhibition hall at the Victoria and Albert Museum.

The V&A Exhibition Road Quarter comprises an alternative entrance to the museum, as well as extra gallery space and a courtyard.

The £54.5 million scheme by Levete’s London-based firm, which was first announced back in 2012, provides 6,400 square metres of extra space for the museum. It is the largest expansion at the museum in over 100 years and forms part of its Future Plan project, which has seen two-thirds of the V&A’s public spaces overhauled in the last 15 years.

The bulk of the project is concealed beneath a new courtyard paved with 11,000 handmade porcelain tiles. Fifteen different linear patterns decorate the tiles covering the 1,200-sqaure-metre Sackler Courtyard, and were designed by the Dutch company Koninklijke Tichelaar Makkum.

The pattern, which is accented by glazing in a variety of tones, is derived from the layout of trusses that support the courtyard. The roof of the cafe and shop is covered in 4,300 further tiles.

The courtyard is set just behind the Aston Webb Screen, a colonnade erected in 1909 to hide the museum’s boiler rooms. The screen was removed to allow access to the site and rebuilt without 1,375 of its original stones to open up the space to passersby as well as a view of the Geological Museum across the street.

The stone screen was damaged by shrapnel during the second world war, and a new set of aluminium gates installed to allow the space to be secured at night are perforated in a pattern that represents these marks.

The courtyard, which will be used to display large-scale sculpture, as well as a space for cafe-goers to sit, opens up views of three previously hidden facades of the V&A. These can also be seen through linear skylights that puncture the stairwell to the gallery below.

“We have created a less formal, more public place that is as much of the street as it is of the museum, attracting and welcoming in new audiences, and making ideas of accessibility and democracy very explicit,” said the V&A.

Access to the Sainsbury Gallery is through the existing building, with three bays of the Western Range building cut through to create new doorways.

Inside, this initial area has been laid in terrazzo with an intricate border referencing the mosaic floors used throughout the rest of the museum. The old mosaic originally used in this area has been lifted and used to repair the floors of other galleries.

Two staircases with lacquered tulipwood balustrades separate descent and ascent to the sunken exhibition space, with visitors exiting through the shop.

The gallery is sunken 18 metres below the courtyard, which involved excavating 22,500 cubic metres of earth beside the Grade I-listed building.

Researchers from Cambridge University worked with Arup engineers to install fibre-optic monitoring systems in the 50-metre-deep tension piles, Levete told Dezeen during a private tour of the building earlier this month.

“The findings will determine if traditional models based on elastic theory accurately represent reality. The results might advance engineering thinking in ways we could never have imagined at the outset,” said a statement from the V&A.

Long triangular-section trusses span the gallery, creating a folded ceiling. A skylight, similar to those used in Levete’s MAAT museum in Lisbon, draw the gaze up towards the newly revealed sgraffito facades on the adjacent building.

The V&A Exhibition Road Quarter will open to the public on 30 June 2017.

Amanda Levete founded her firm AL_A with directors Ho-Yin Ng, Alice Dietsch and Maximiliano Arrocet in 2009. She came in at number 179 on the inaugural Dezeen Hot List – a guide to the key players of the architecture and design industry.

Among the firm’s most recently completed projects is an aluminium-plated tower in Bangkok.

Photography by Hufton + Crow. Drone footage is courtesy of the V&A museum.