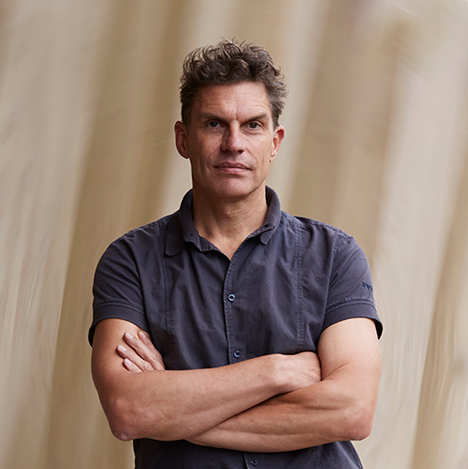 The Royal College of Art’s dean of architecture Alex de Rijke has become the latest staff member to announce their departure from the London institution.

De Rijke has led the RCA‘s School of Architecture for four years, but will now leave at the end of September 2015 to focus on his practice dRMM, which he founded with Sadie Morgan and Philip Marsh.

“I’ve been dean and acting head of programme at the same time which is two jobs and I’ve also been running dRMM – so three jobs,” said de Rijke. “I just need more time at dRMM.”

De Rijke told Dezeen that his relationship with the school would continue in a different capacity.

“I’m certainly not walking away from the school of architecture,” he said. “Obviously the students might be worried that I’m buggering off, but I’m not.”

“Frankly, when you’ve been working at the level of senior academic management, you’re very happy to go into the coal face of crits and student reviews because that’s the most exciting part of the job and that’s the bit that I intend to continue with.”

Related story: “Changing of the guard” as more senior staff step down at Royal College of Art

During his time at the RCA, the school was enlarged to include two programmes – Architecture, and Interior Design – which have recently both gained new leaders. The institution also has plans for new programmes in landscape design and city design.

Adrian Lahoud – previously head of the urban design masters programme at The Bartlett – was appointed head of architecture last month.

Graeme Brooker, formerly the head of Fashion and Interiors at the UK’s Middlesex University, is taking over as head of interior design at the RCA from Ab Rogers – who announced his departure in March.

The school will now be led by acting dean Susannah Hagan, until a replacement for De Rijke can be found.

“With an excellent new head of programme in place for architecture it was a good time to hand over control,” he told Dezeen. “The dean’s role is in able cover by Sussanah Hagan, who’s our head of research.”

“The RCA teaching remains very closely connected with the practice. Everyone who teaches at the school of architecture has experience in practice,” he added.

“At the higher levels of academic management, I think it’s seen to be advantageous to really know how to operate within the academic field, particularly at a time when all the universities really have to know how to fund themselves.”

“There’s a general concern about the way in which education is delivered in this government as it is obviously changing, but it’s not unique to the RCA.”

The departures of De Rijke and Rogers are part of a “changing of the guard” among senior teaching staff at the RCA. The heads of the Design Interactions and Textiles courses, as well as the Helen Hamlyn Centre for Design research unit, are also leaving at the end of this academic year.

“Under Professor de Rijke’s leadership, the School of Architecture developed a new and energised focus on both theory and practice, with research at the very centre of its activities,” said pro-rector Naren Barfield. “As one of the UK’s foremost architects, Alex had always indicated that he would serve for a limited period of time, and we knew that he would return eventually to full-time practice.”

Recently named as the world’s best design school, the Royal College or Art held its annual Show RCA exhibition earlier this month. Architecture projects completed by this year’s graduates include proposals for a tower supported by human statues, a tax haven populated with extinct species and a theme park where attractions are based on risky activities.

Other appointments at architecture schools this year include Nader Tehrani, who joins New York’s The Cooper Union, and Monica Ponce de Leon at Princeton University in New Jersey.

Photograph is by Petr Krejčí.