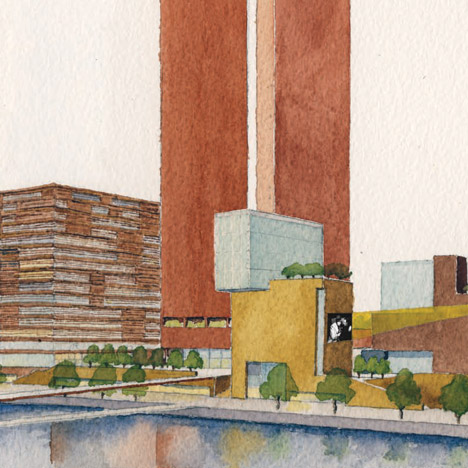 Architects Bob Allies and Graham Morrison are among the figures from the architecture and design world awarded in the UK’s 2016 New Year Honours.

Allies and Morrison, who founded their eponymous architecture firm in London in 1984, will both be awarded Officer of the Order of the British Empire (OBE) for “services to architecture”.

The pair are currently working on designs for a new cultural quarter in London’s Olympic Park, and have completed several other projects in the capital including a concrete-clad dance studio and a pedestrian tunnel linking King’s Cross and St Pancras stations.

Also receiving an OBE is Joanna van Heyningen, co-founder of van Heyningen and Haward architects. The architect has completed major projects around the UK including the Sutton Hoo Visitor Centre for the National Trust and West Ham station in London.

Patrick Borer, who specialises in sustainable architecture, will receive a Member of the Order of the British Empire (MBE). Borer is key figure at the Centre for Alternative Technology, where he is involved in the design and development of low-energy buildings, and ecological methods of construction.

Educational figures have also been honoured in this year’s list, with architect James Dannat awarded an OBE for “services to architecture and architectural education”. Irene Helen McAra-McWilliam, head of the School of Design and director of design innovation at the Glasgow School of Art, will also receive an OBE.

The New Year Honours are presented on 1 January each year as part of the British monarchy’s honours system. More than 1,195 people have been recognised in the 2016 list, but design and architecture names are few and far between, as has been the case in previous years.

Other individuals were honoured for their contributions to sports and entertainment, while three quarters of the list focused on people that had carried out work in their local community.

Interior designer Ilse Crawford, and retail pioneer Zeev Aram were given titles in 2014, while industrial designer Kenneth Grange received a Knighthood in 2013. Jonathan Ive and Marc Newson were both honoured in 2012.

The post Allies and Morrison among architects awarded in 2016 New Year’s Honours appeared first on Dezeen.