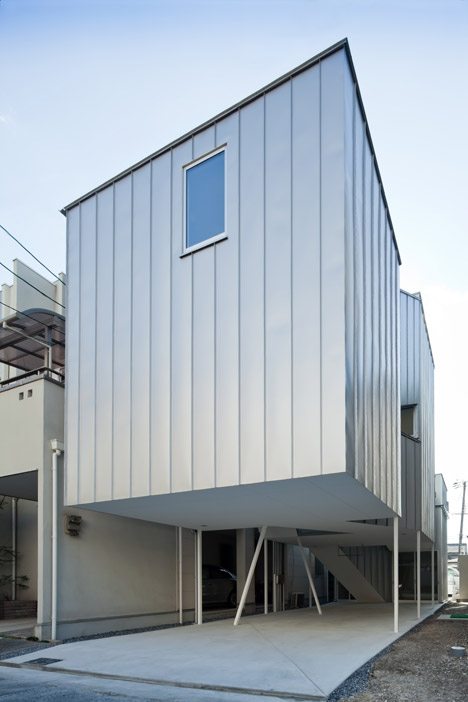 Japanese studio Alphaville raised the base of this Osaka house up on crooked stilts, revealing the complex arrangement of rooms, bridges and lightwells contained within (+ slideshow).

The Dig in the Sky house is a three-storey family residence. Its name refers to its unusual composition – three similar-sized blocks bridged by suspended corridors and staircases, framing two triangular shafts that are open to the sky.

Alphaville, whose portfolio includes several houses with complicated interiors, wanted to ensure plenty of light would be able to enter the narrow house, which is tightly sandwiched between two existing buildings.

Rather than wrapping rooms around one central garden, the architects planned a sequence of spaces that meander gently upwards, each with windows facing into the triangle-shaped lightwells.

These rooms are all connected by six of the elevated corridors and staircases, which are contained within four crisscrossing volumes.

“As each building will hold one room-sized space on each floor, we decided to connect rooms with tube-shaped corridors and staircases that cross the courtyards,” explained the architects.

“Every room is not divided by doors, but instead is linked by long stretching-shaped entrances. They are loosely connected, but are able to gain an appropriate sense of distance for habitation.”

Externally the building and the bridges have been clad with sheets of galvanised steel, giving the building a facade that shimmers in daylight.

The front and middle block are raised off the ground, supported by six slender uprights. Some of these supports run perpendicular to the ground, while others have been positioned at angles to follow the tapered walls above.

This arrangement creates a sheltered space at the building’s entrance where residents can park a car and bicycles.

A small guest bedroom and bathroom are located on the ground floor. A staircase leads up from here to a living room at the centre of the building featuring glazed walls on two sides.

“The sunlight reflected on the exterior wall of the tube penetrates into the interior space from various angles,” said Alphaville. “It creates intoned sequences by overlapping of the tube and the landscape seen beyond, as if multiple folding screens stand.”

One corridor leads from this area to a kitchen and dining space at the back of the building. A second walkway accommodates a study area, and provides the route through to the children’s bedroom.

The master bedroom and bathroom occupy the two spaces on the split-level upper storey, which can be accessed from staircases in both the living room and the kitchen.

“The interior, which is not confined by private rooms or doors, enables not only to offer many different routes to get to the destined place, but also to have a feeling of cityscape, thanks to the tubes that serve as the half-public space,” added the architects.

The house was constructed as a steel structure with concrete floor slabs. Windows are framed by aluminium, while wooden floors comprise veneered lauan wood.

Photography is by Shigeo Ogawa.