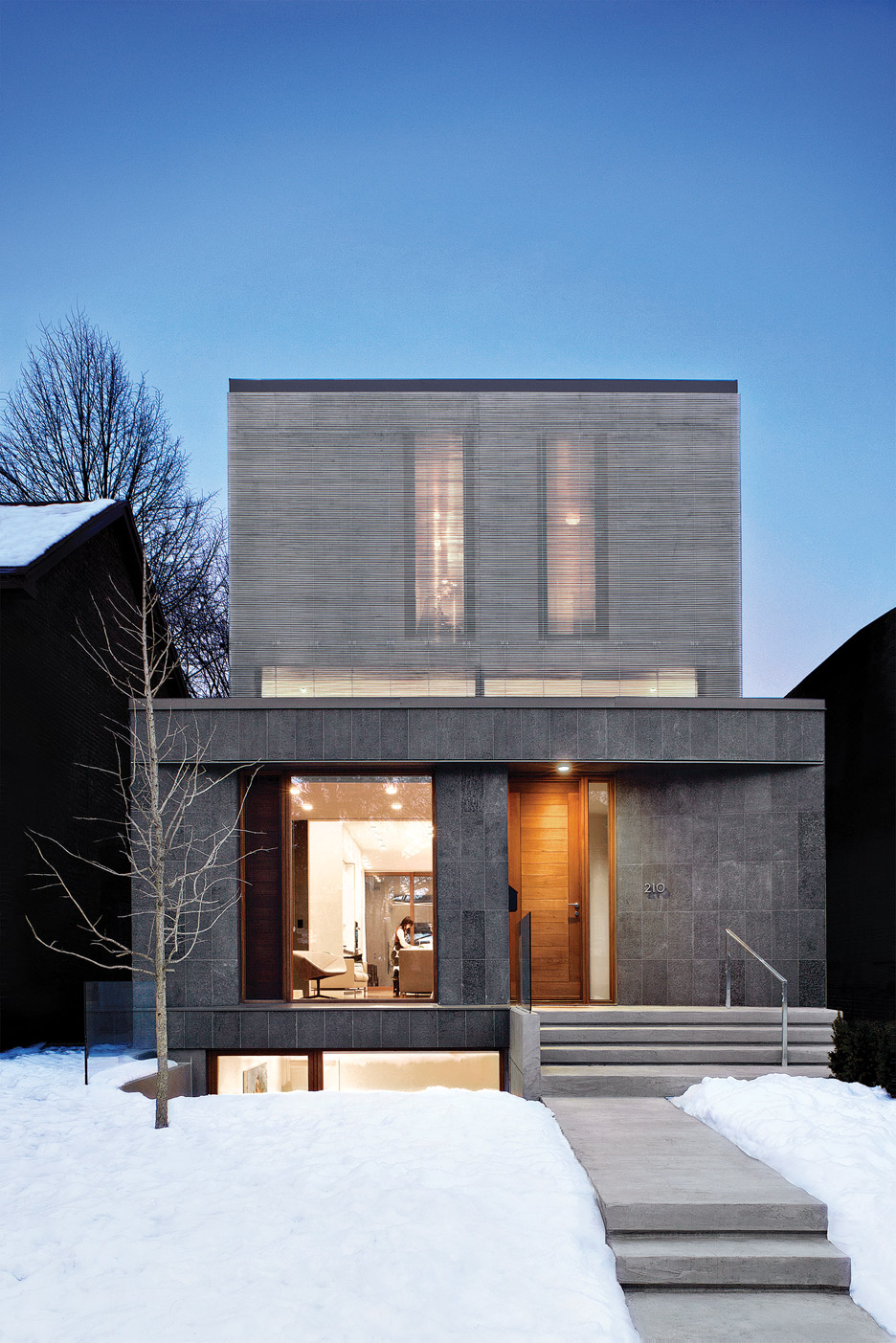 This family home in Toronto by local firm Paul Raff Studio features a brise-soleil made of aluminium louvres, designed to “bounce sunlight deep into the space”.

Called the Counterpoint House, the 404-square-metre dwelling is situated on a slender lot in a leafy Toronto neighbourhood. It includes two storeys and a finished basement, along with a detached garage.

On the exterior, the house is clad in flamed basalt stone, with a structural system made of structurally insulated panels, also known as SIPs. Large windows on all levels, along with several light wells, enable natural light to fill the dwelling.

On the street-facing southern side of the home, the upper portion is set back from the first storey and is sheathed in a brise-soleil consisting of 220 “light shelves”.

“The aluminium light shelves are horizontal slats that have a high coefficient of reflectivity,” said Paul Raff Studio. “Their highly polished top surface bounce sunlight deep into the space.”

“It imbues the interior with a glow, and a dynamic pattern of shadows and reflections that shift across the space over the course of the hours and seasons,” it added.

The house was designed for a family of four, whose wish list included open, interconnected living spaces with a strong connection to the outdoors.

“After immigrating to Toronto from Europe, the family searched extensively but could not find a house they wanted to live in,” said the team.

“They wanted a home that would seamlessly enhance their experience of working, studying, playing music, cooking and dining together.”

The ground floor contains an open-plan space containing a lounge, kitchen, dining area, which opens out to the garden. There is also a reception space and a study.

The basement is largely designed to accommodate guests.

“The lower level offers a light-filled, comfortable getaway for the many family members who often visit from abroad,” said the firm. “They have their own kitchenette, two bedrooms and washroom to call their home away from home.”

Wood flooring was used throughout the home, with the exception of the kitchen and entryway, which feature Loire limestone.

In the study, a built-in desk and cabinet system were custom-designed by the architect.

The decor is a mix of Mid-Century Modern pieces belonging to the owner and contemporary furniture selected by the design team.

The owners have described the space as “uplifting” and envision living there long into the future.

“After moving in, the owners cancelled their first vacation travel plans because they simply wanted to be in their new home,” said the firm. “Designed to accommodate a future installation of an elevator, the owners plan to live there well into their dotage.”

Other recent projects in Toronto include a new student center for Ryerson University designed by Snøhetta and plans for a park that will stretch underneath an elevated highway.

Photography is by Ben Rahn at A-Frame unless otherwise stated.