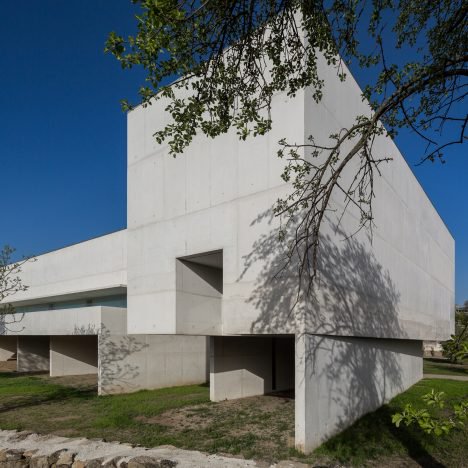 The €9 million (£7.75 million) Nadir Afonso Foundation is named after the painter, architect and philosopher Nadir Afonso (1920-2013), who was born in the city.

Utility spaces are clad in Zincalum – a product made from steel plates coated in aluminum-zinc.

The whole building is raised above its site on fins of concrete, featuring arched, triangular and rectangular cutouts that allow visitors to use the area as a covered walkway. These pilotti are intended to protect the building flooding when the river bursts its banks.

A ramped walkway leads up to the entrance of the museum, where the space is broken into three linear strips for permanent and temporary exhibits.

The primary exhibition space is lit by a continuous skylight and can be subdivided into two smaller rooms, while the wing to the east features a long horizontal window facing the river and a temporary exhibition area that has no natural light at all.

These are positioned at one end of the gallery space, while a service area with administrative areas, archives, service stairs and lifts, and workshops is placed at the other.

Álvaro Siza Vieira, 83, is one of Portugal’s most celebrated architects and was awarded the Pritzker Prize in 1992.

In an exclusive interview with Dezeen, he spoke about his practice, and his decision to keep a small team that allows him to maintain creative control over projects.

The pair recently renovated a museum at a historic Portuguese monastery and designed a new contemporary sculpture gallery.

They also collaborated on installations for the Venice Architecture Biennale 2012 – the same year Siza was awarded the Golden Lion for lifetime achievement.

Photography is by Fernando Guerra.