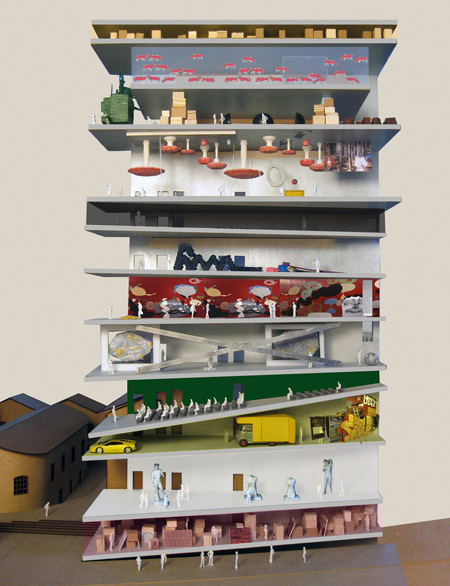 News: Prada’s art foundation has announced its new venue by OMA’s research arm AMO will open this May, featuring a bar designed by film director Wes Anderson.
Scheduled to welcome visitors on 9 May, the Fondazione Prada will be located on a Milanese industrial site at Largo Isarco – south of Milan’s city centre and away from the brand’s headquarters.

Led by Dutch architect Rem Koolhaas and first revealed in 2008, AMO’s design includes 11,000 square metres of exhibition space intended to “expand the repertoire of spatial typologies in which art can be exhibited and shared with the public”.

Seven preexisting buildings of a 1910s former distillery will be linked by three new structures – an exhibition venue, an auditorium and a museum tower – occupying the courtyard spaces in between.
The complex will host Fondazione Prada’s array of events, relating to disciplines including cinema, design, architecture, philosophy, fashion and performance.

The entrance building will connect to a children’s area designed by students from the École Nationale Supérieure d’Architecture de Versailles, and the bar modelled on traditional Milan cafes by director Wes Anderson – who is best known for films including The Life Aquatic and The Grand Budapest Hotel.
The foundation is being moved from its current location at Via Fogazzaro 36, which earlier this week hosted Prada’s menswear show in a space designed by AMO.
Prada has an ongoing relationship with OMA that goes back 25 years. The two companies have previous collaborated on a series of store interiors, catwalk designs and exhibition spaces, including the Prada Transformer in Seoul.

Fondazione Prada was founded by Miuccia Prada and Patrizio Bertelli in 1993 as a non-profit organisation focussed on contemporary art.
The organisation’s Venetian venue will continue to operate in the 18th century Palazzo Ca’ Corner della Regina. The two locations are set to host concurrent exhibitions of ancient art from Prada’s collection this summer.
“Both projects, whose display system has been conceived by OMA, analyse the themes of seriality and the copy in classical art and the reproduction of small-scale Greek and Roman sculptures from the Renaissance to Neoclassicism, respectively,” said Fondazione Prada in a statement.
The post AMO’s Fondazione Prada set to open in Milan appeared first on Dezeen.