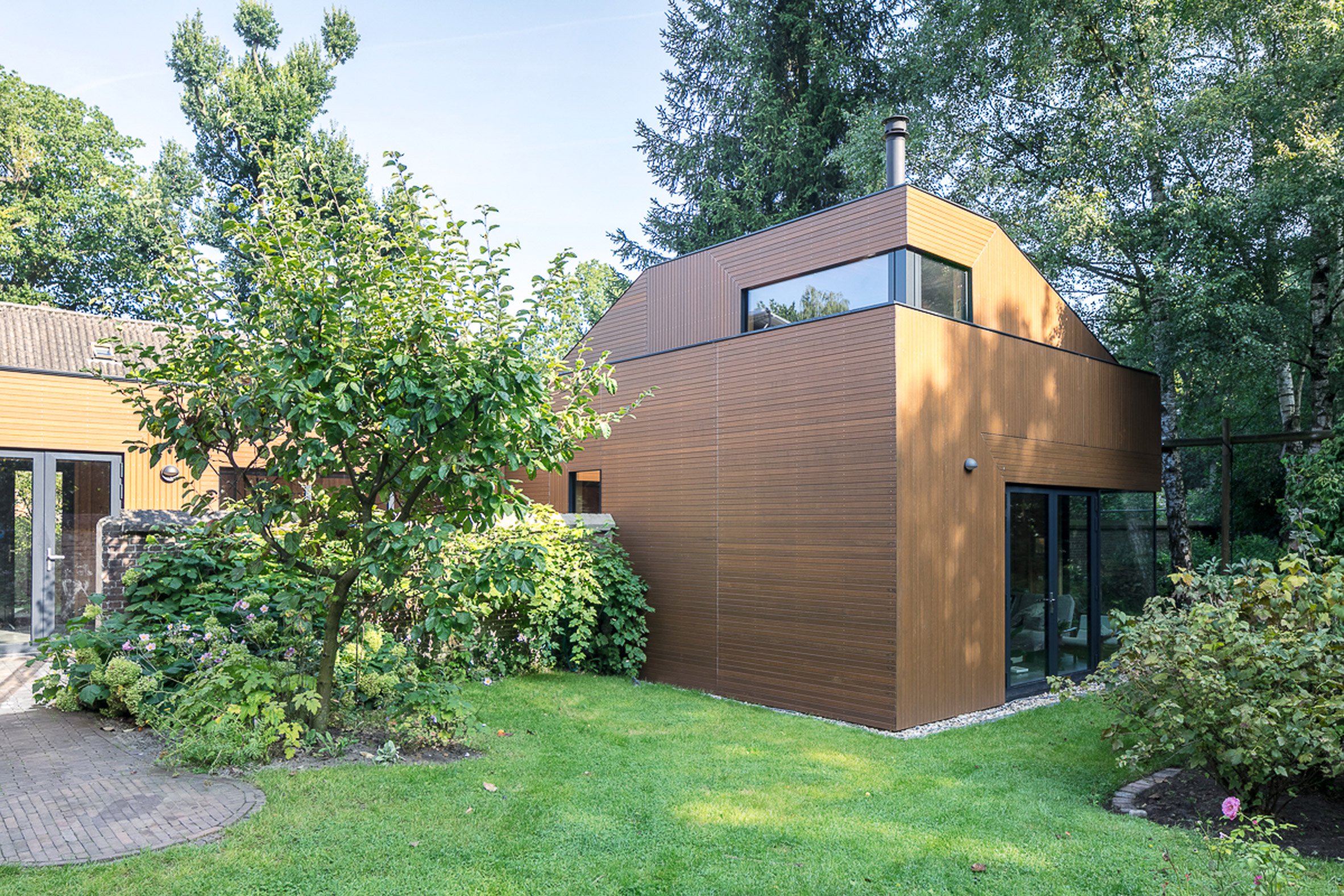 An ancient monastery wall slices through this Utrecht house extension

Utrecht-based architecture studio Richèl Lubbers Architecten has added an angular extension to a residence that sits on the site of an old monastery.

Located in a leafy neighborhood of the city, the owners wanted to create an extension to their home that could be used as guest quarters with the possibility of turning it into a self-contained retirement annex in the future.

The solution included refurbishing the existing property and adding a single-storey timber-clad pavilion with a mezzanine level and sloping roof that sweeps out into the garden. The project began in spring 2016 and was completed by the autumn.

Accessed via a glass window-lined corridor that houses a pantry, the extension comprises a garden room, bathroom and sauna on the ground floor and a bedroom on the mezanine.

The interior is sparsely finished with plywood walls and polished concrete floors. Wooden batons that line the walls reach up to exposed ceiling beams. The exterior is clad in a specially treated sustainable timber called Platowood.

To create the angular extension, Richèl Lubbers Architecten took advantage of the Netherlands’ new rules on license-free construction that were introduced on in November 2014. The law allows a homeowner to build an extension behind their house without the need of a building permit.

However the extension’s roof must be no more than 25 centimetres above the level of the first floor of the original building, unless it is more than four metres behind the original property, in which case you can build a sloping roof up to 5 metres tall. The rules also stipulate that the sloped roof must have at least two sloped parts.

“As the plot is behind the gardens of other neighbours, we chose to position the two sloping roofs so that they slope upwards away from the neighbour’s property and the street,” Richèl Lubbers told Dezeen

“This leads to a different solution than a ‘regular sloped roof’, and creates an interesting facade towards the garden.”

Hidden from the street and blended into its green surroundings, the extension is intersected by an cloister wall from an old monastery that was previously hidden between two barns that used to stand on the site.

The wall runs through the property’s garden, straight through the extension and out the other side. Inside, the architects removed a section of the wall to insert a small stair that provides access to the garden room.

The old hallway and staircase situated in the old house were also repositioned to create a more spacious kitchen.

“During our project our client made some principle decisions, investing in quality rather than quantity,” said the architects. “Not necessarily a large kitchen, but rather a special stove with attention to a wood-fired oven.”

Residual heat from the wood-fired oven is used to heat the shower water and underfloor heating.

In addition a state-of-the-art boiler is fed from different heat sources that include the sun and residual heat from the oven. The roofs, walls and floors of the existing house were insulated and solar panels and solar collectors were added.

Photography is by Stijn Poelstra and Floriaan Willemse.

The post An ancient monastery wall slices through this Utrecht house extension appeared first on Dezeen.