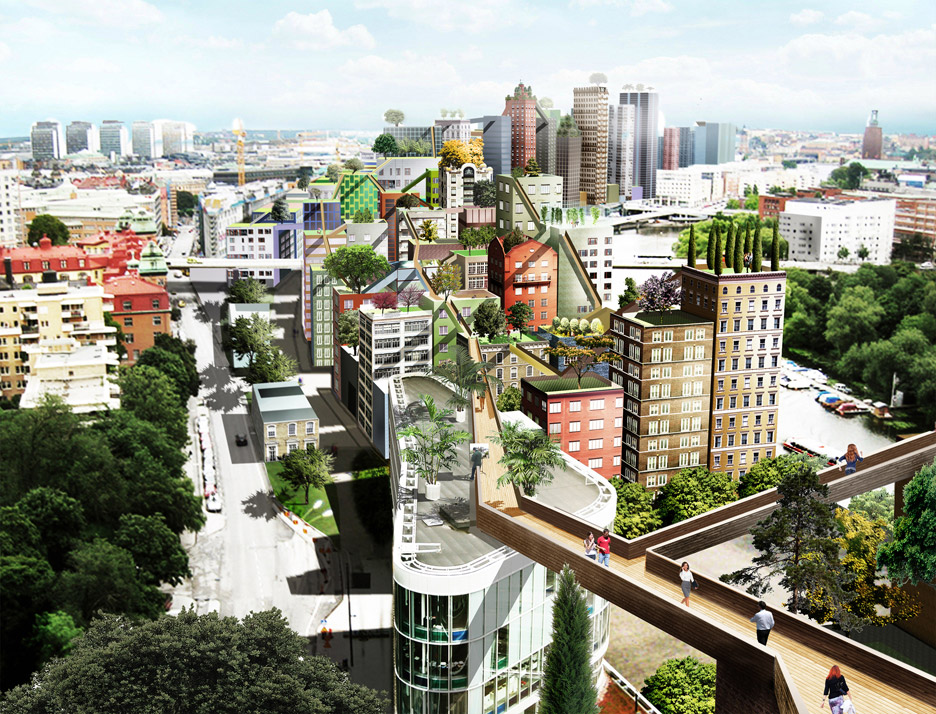 The Klarastaden scheme is made up from a group of thin tower blocks with a minimal footprint, intended to densify the neighbourhood that boarders the Klara Sjö canal.

Taking advantage of the existing infrastructure around the station, it aims to provide almost 6,000 new homes, 8,000 work places and 270 shops to accommodate Stockholm’s growing population.

“The new proposal aims to build a tight and high city area in order to make room for as many people as possible in central Stockholm,” said Anders Berensson. “The new city area will be the highest and densest in Stockholm.”

Blocks would range between eight and 100 metres in height, with the tallest containing offices, placed closest to the station. Building would decrease in scale towards the outskirts of the area, where existing residential blocks are located.

Zoning regulations would control height, stipulating spacer bands of low-rise housing and courtyards between every set of high-rise blocks, ranging between seven and 30 storeys.

This arrangement would give 90 per cent of the apartments a view of the water, said the architect, while minimising the negative impact of shading or blocked views for existing buildings.

“The proposal is apartment buildings scaled down to its smallest component, one stairwell surrounded by apartments to get the smallest footprint possible,” explained Berensson. “With these smaller volumes, the design can be more flexible and adapt to parameters such as views, sight lines and light conditions and still get more living space.”

The blocks would be linked by public courtyards, roof terraces and elevated “sky walks”, while decking over the train tracks would make an addition 2,000 metres of shoreline accessible to the public.

“The sky walk on the roof terraces will be one of the longest parks in Stockholm with the best view in town,” said the architect.

Anders Berensson is also known as one half of the design duo Visiondivision, alongside fellow architect Ulf Mejergren. Projects by the pair include a playground from a felled poplar tree in an Indianapolis, an outdoor cinema under an abandoned bridge in Stockholm and a pitted concrete pond-liner for a crayfish enthusiast.