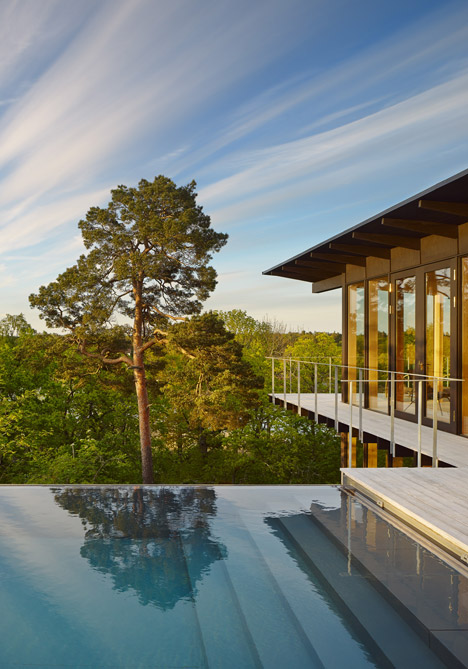 Swedish architect Andreas Martin-Löf has completed a weekend retreat for himself on a steep hill overlooking the Stockholm archipelago, with eye-level views of the surrounding tree canopy (+ slideshow).

Stockholm-based architect Andreas Martin-Löf designed Aspvik House as a weekend retreat for himself on land owned by his family. It sits on a steep hill in Aspvik, a town in the Stockholm archipelago, about a 40-minute drive from the city.

“I started to sketch the house as a child, and did one new sketch every summer for a while,” Martin-Löf told Dezeen. “Then in 2009 my mother died and I inherited part of the land, and slowly started to think about it again, working on it between 2011 and 2015. The final construction period was around one and a half years.”

The archipelago surrounding Stockholm is a popular place for architect-designed homes, including a house with a sloping roof that doubles a sledding hill, and metal-clad retreat that Martin Videgård of Tham & Videgård Arkitekter designed for himself.

To build Aspvik House on its steep site, Martin-Löf had to construct a gravel road at the bottom of the hill and design all components so they could be carried on-site by hand.

“Building elements including the handmade windows and doors, the steel frame and the plywood cladding were prepared in nearby workshops and assembled on-site,” he said. “The only exception was the cast-in-situ concrete retaining wall and plinth, which was pumped from the nearest road.”

The house has a simple layout, with a bedroom, bathroom and sauna on the lower floor, and an open-plan kitchen, dining room and living room on the upper floor. The concrete plinth beneath the bedroom also houses a cellar and workshop.

“The pool was built in a standard way, because of budget, but also in a precise way,” said Martin-Löf. “To emphasise the infinity element I just fixed a piece of stainless steel to the pool.”

Inside the house, the walls and ceilings have been lined with 15-millimetre-thick untreated pine plywood.

“I wanted the house to relate to the pine trees outside. It also smells very nice because of all the wood,” said Martin-Löf. “It will darken over time. We will see who is ageing fastest – me or the plywood.”

The raw quality of the timber has been off-set by more luxurious materials, including a Carrara marble worktop and splash-back in the kitchen, and polished brass taps and door handles.

“I found some nice electrical outlets for the floor in brass, and after that I decided to do all visible metal parts in this material,” said Martin-Löf, whose studio also used brass in its design for a light with a metal clamp that attaches to desks.

Downstairs, the bathroom has been covered entirely in black Nero Marquina marble.

“The bathroom is in a kind of cave-like space, but I wanted it to be like a refined cave,” said Martin-Löf.

“I have built almost just with plasterboard throughout my career, so it was forbidden in this house. I even put black marble on the bathroom ceiling,” he added. “I think the patterns in the marble and the wood relate nicely to each other. Two worlds meet – high and low, expensive and cheap.”

Externally, the house is clad in plywood, which was painted black to blend in with the wooded surroundings.

Elements of the house were also inspired by adjacent buildings on the site. The rectilinear shape and glazing mirrors the style of a nearby 1960s extension, and the tapered concrete plinth nods to the form of a pagoda-style lookout built nearly 100 years ago on the site.

The final construction cost was in excess of 2.5 million Swedish Krona (approximately £196,800).

“I stopped counting after 2.5 million Krona, but I think it has been quite cheap in relation to what I got,” said Martin-Löf.

“It has been a big project to build my own house, and project manage everything on-site, but it has also been much more rewarding than I ever thought, and we have already got new commissions to design more dream summer homes,” he added.

Photography is by Åke E:son Lindman.

The post Andreas Martin-Löf designs hilltop home near Stockholm with views over the treetops appeared first on Dezeen.