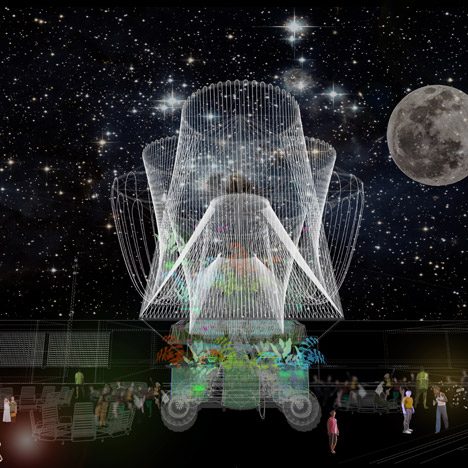 News: Spanish architect Andrés Jaque has won this year’s MoMA PS1 Young Architects Program contest, with plans to turn the courtyard of the New York gallery into a water filtration plant.
Jaque’s New York- and Madrid-based studio Office for Political Innovation will draw attention to the global issue of water shortage for the 2015 edition of the YAP programme, which invites emerging architects to propose a temporary structure for the MoMA PS1 gallery in Queens.

Related story: Tower of “grown” bio-bricks by The Living opens at MoMA PS1

Named Cosmo, the structure will comprise a huge pipe network, engineered to filter and purify 3,000 gallons of water every four days. The purifying cycle will involve eliminating suspended particles and nitrates, balancing the PH, and increasing the level of dissolved oxygen.
When each cycle is complete, the structure will light up in celebration – offering a colourful background to the gallery’s summer music programme, known as the Warm Up sessions.
According to Jaque, the project will highlight a statistic put forward by the United Nations – that by 2025 approximately two thirds of the global population will live in countries that lack sufficient water.

His “moveable artefact” has also been designed to be easily reproduced, potentially giving people all around the world access to clean drinking water.
 ”This year’s proposal takes one of the Young Architects Program’s essential requirements – providing a water feature for leisure and fun – and highlights water itself as a scarce resource,” explained MoMA architecture and design curator Pedro Gadanho.
“Relying on off-the-shelf components from agro-industrial origin, an exuberant mobile architecture celebrates water-purification processes and turns their intricate visualisation into an unusual backdrop for the Warm Up sessions,” he said.
Jaque was selected from a shortlist of five finalists, including Brillhart Architecture and Studio Benjamin Dillenburger, for the project.
Opening in late June, his structure will mark the 16th year of YAP, which began in 2000. Previous commissions for the programme include projects by HWKN, SO-IL and The Living, who created last year’s tower of bio-bricks.
“Last year Hy-Fi, a nearly zero carbon footprint construction by The Living, raised awareness of ecological and climate change,” said MoMA PS1 director Klaus Biesenbach. “This year Cosmo continues to do so, addressing the issue of increasingly scarce water supplies worldwide in a successful and innovative way.”
Andrés Jaque is best known for an installation that involved filling Mies van der Rohe’s Barcelona Pavilion with junk from its basement, but the architect also received a Silver Lion at the 2014 Venice Architecture Biennale for the project Sales Oddity – part of the Monditalia exhibition at the Arsenale.
The post Andrés Jaque to create water-purifying pipe network for MoMA PS1 Young Architects Program appeared first on Dezeen.