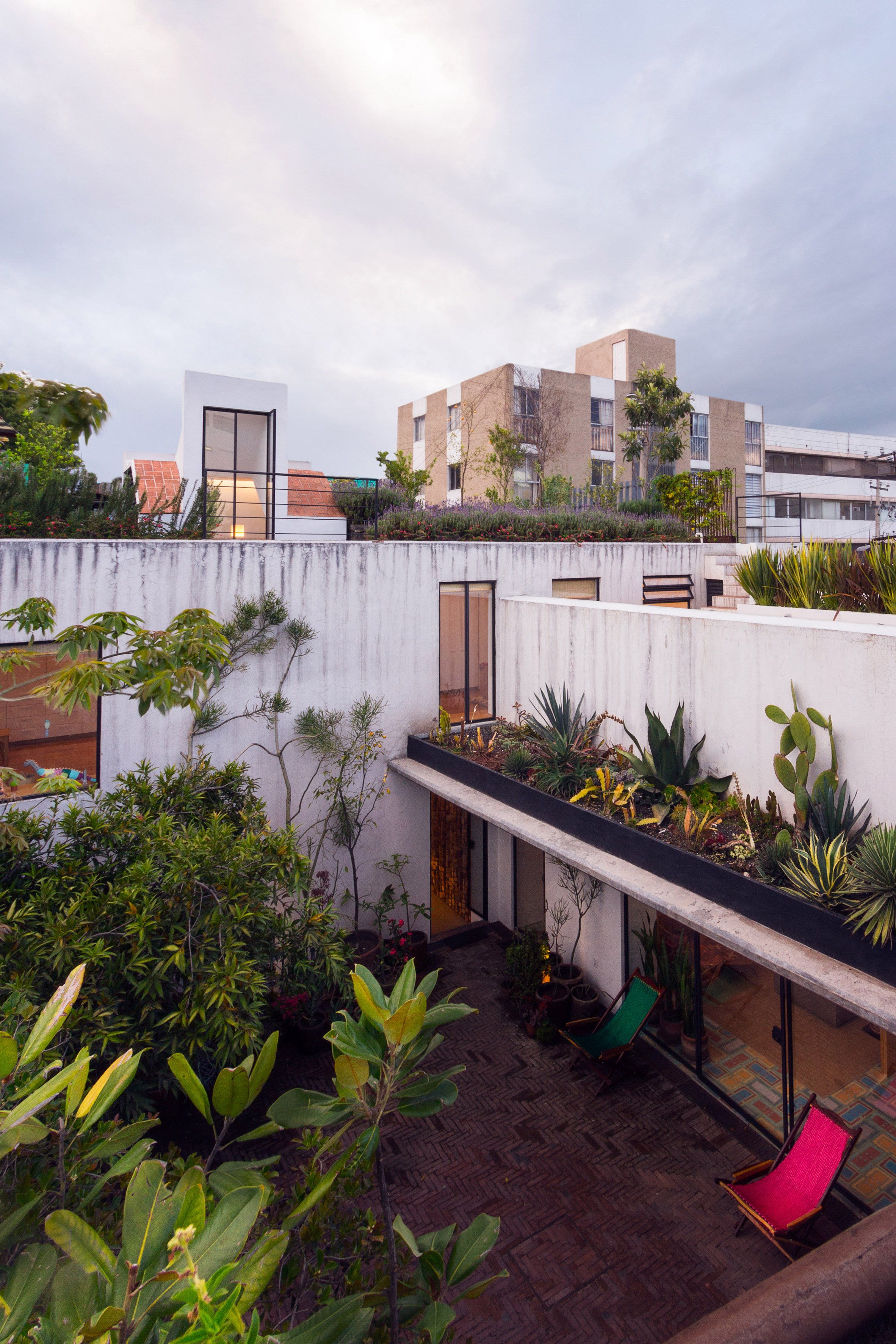 Stained white walls, black-framed windows and roof gardens surround a courtyard overflowing with greenery in this house in Mexico City, which architect Andres Stebelski has overhauled for an artist.

While renovating the U-shaped residence in the old Tacubaya area of the Mexican capital, Stebelski was struck by the fact that the rooms were arranged around a central patio that they had no access to.

To resolve this, the Mexican architect added a series of glazed doors with black frames to open the ground floor onto the outdoor space, which features herringbone-patterned paving and an abundance of potted planting. New windows also ensure that plenty of natural daylight is brought inside.

“The new project is built around the original patio to create the central focal point of the house,” said Stebelski, who has also completed a clay-covered house in the city.

His design is the latest in a series of adaptations of the residence, which was once used as a dental practice. To create continuity across the building’s various elements, all the walls are covered with a white lime plaster.

This has already weathered with a black “tear-stained patina” caused by rain so that it appears aged instead of new.

“The intention of the house was that there wasn’t distinction between the intervened and the original,” the architect told Dezeen.

“The result is a new house full of light that seems to have always been there.”

On the ground floor, dividing walls were stripped out to create an open-plan space for the artist’s main living area.

It features a new wood-panelled ceiling supported by beams, while openings on either side create cracks of light.

The lounge and the dining area occupy one of the wings, and are partitioned by a wooden shelf.

A tall set of wooden bookshelves fitted at one end of the space is accompanied by a ladder that makes the top accessible, while low-level cabinets run along the longer wall to provide storage for an extensive collection of music records.

At the dining-room end, a large window offers a view to a secluded garden slotted in the corner of the house with a large wooden statue placed in front.

Colourful patterned tiles covering the floor are complemented by a series of vibrant features, like bright wall posters and potted plants – a continuation of the greenery outside.

The kitchen, which occupies a nook around the corner of this floor, is finished more neutrally with wooden cabinets and white stone counters.

Continuing the more decorative aesthetic, the entrance hall has pink and green floor tiles and a wall made of moving blocks, an artwork created by the resident.

Above this wing, the architect added a new first floor to make two extra bedrooms – a third is located above the opposing other wing.

A doorway opens the master bedroom onto a narrow balcony overlooking the courtyard. It is one series of roof gardens added at different levels to the house.

Other residential projects in Mexico City include a concrete home with glazed walls that fully open to the outdoors and a property elevated off the ground to allow plants to grow underneath.

Photography is by Nasser Malek.

The post Andres Stebelski opens up artist’s Mexico City house to its courtyard during renovation appeared first on Dezeen.