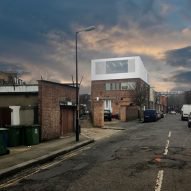 Anish Kapoor has been accused of being “mean-spirited” by pushing ahead with plans for a light-blocking roof extension to his south London studio, by the leader of a campaign against the development.

The group of residents petitioned to reduce the scale of of the extension to the artist‘s workspace on Farmers Road in Camberwell, which they believe will block natural light to their properties.

They demanded the height of the extension be lowered by 50 centimetres, but plans for the corrugated aluminium extension by London architecture studio Caseyfierro Architects were approved by Southwark Council last week with only minor tweaks.

Suzanne Malyon, who led the campaign Stop Anish Kapoor stealing our light and colour!, accused Kapoor and the architects of being “mean-spirited” for refusing to take into consideration the impact of the works on their neighbours.

“He’s part of the moneyed, connected establishment and we feel like we’re not listened to as we’re less able to afford lawyers,” Malyon told Dezeen. “So, just feel shafted really.”

“I think the thing that we found the most disappointing was the fact that Kapoor or the architects would never meet with the residents, even though we contacted Kapoor’s studio numerous times.”

The group forced the proposal to planning committee, and brought on independent advisor Julie Greer of planning and urban design company GreerPritchard to examine the plans – which she described as “extremely disappointing”.

Greer recommended the extension be set back on all sides and reduced in height, as well the integration of a “living wall” on the elevation facing neighbouring properties.

“The proposed height of the extension at 3,670 millimetres is far greater than what is necessary to extend a building at roof level,” said Greer’s report. “Its dominance due to its height, scale and use of materials remains unacceptable.”

“The design does not integrate well with the host building and the proposed use of materials is inappropriate.”

However, she said neither Kapoor nor his team would agree to meet with residents and did not attended the committee meeting. Southwark Council went on to pass the existing plans with only the inclusion of the green wall and a condition regarding limited roof access.

Maylon claims the proposal got the go-ahead from planners to avoid a legal challenge, and ensuing costs, from Kapoor.

“The planning officer in charge of Kapoor’s case was really unhelpful, never visited any of the affected rooms and actually lied in the committee meeting when he said Kapoor’s team had consulted with us,” she said.

“Kapoor sets him self up as an engaged, political individual, who you would think could empathise with the residents’ dismay of having to live with the oppressive height of the design, which will really impact their lives,” added Maylon. “But of course that doesn’t suit him, where commenting on Brexit or Donald Trump is better to show what a good liberal guy he is.”

Anish Kapoor and Caseyfierro Architects have been contacted for comment.

Kapoor was the most popular artist on the inaugural Dezeen Hot List, with stories about the addition of a slide to his ArcelorMittal Orbit sculpture at London’s Olympic park and buying exclusive rights to a the “blackest black” pigment among the most popular on the site.

His exclusive usage of the pigment riled other artists and shortly after, Stuart Semple developed the “world’s pinkest pink” – and banned Kapoor from using it in retaliation. However, Kapoor managed to get his hands on the pigment and provocatively promoted through an Instagram picture of his middle finger dipped in the paint.

Semple has continued to attempt to enforce Kapoor’s ban through the release of other pigments.