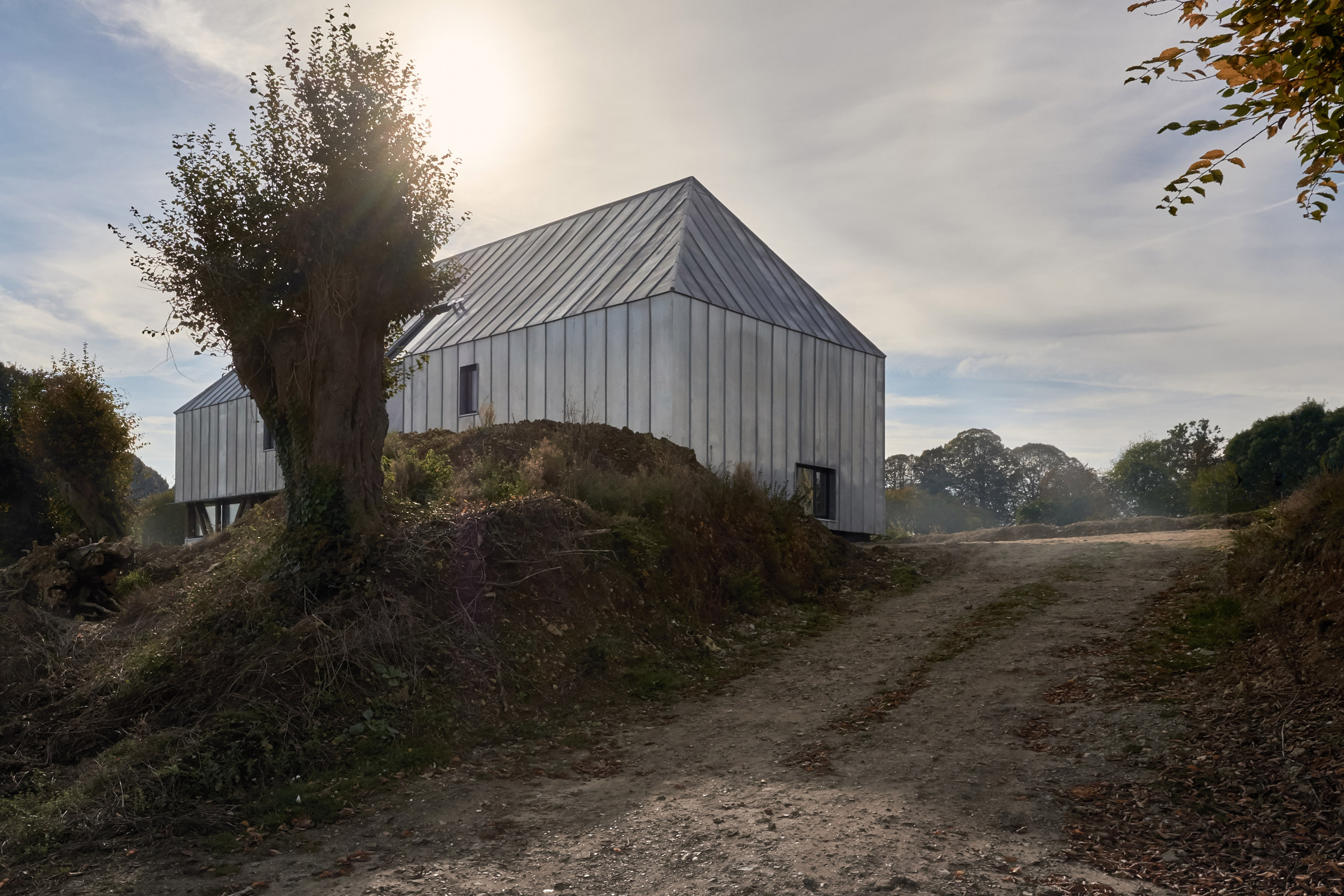 Zinc plates protect the ageing wooden structure of this barn in the French village Notre-Dame-de-Bliquetuit, which was been transformed into a house with its own spa by Antonin Ziegler.

Parisian architect Ziegler and his studio chose zinc as a replacement for the weatherbeaten cladding of The Barn house, which stands on the edge of the wheat field where it was formerly used to store fodder for horses.

The metallic cladding is left untreated in the expectation that a patina will develop across its surface and give an impression that the building has always been there.

To enhance this narrative of mystery surrounding the building’s origins, a young girl dressed in a cape poses with a selection of taxidermy birds and a dog inside the home for a fairytale-inspired photoshoot.

“In this very simple, rural context, the project intends to be just as rustic, without sophistication or details,” said Ziegler, who carried out the project to a budget of €262,000 (£219,000).

“The framework is the fundamental element of the new residence,” he continued. “From the outside, it remains partially visible, beneath the zinc envelope, thus conferring an incomplete aspect to the construction, as though eroded by the surrounding nature.”

The zinc shell has just a few windows in its upper storey to maintain the “monolithic” appearance of an agricultural building.

But the cladding stops short of the stone foundations to create a slim window around the ground-floor living spaces before changing direction to light the stairwell in the centre of the building.

The barn’s original wooden framework runs across the windows, which frame views out to the fields as well as a nearby river and its passing boats.

“The windows and doors are visually understated: the archetypal house is kept at bay to give rise to another kind of habitat, more in keeping with the surrounding wilderness,” said the architect.

“A lone crack that pierces the roof and walls thus gives the project the appearance of a contemporary ruin.”

The building’s timber and breeze-block construction is left exposed throughout the 217-square-metre space, which is finished with concrete and tiled surfaces, animal skins and an Eames lounge chair.

Two double-height spaces at either end of the gabled block host the open-plan living space and an indoor pool.

A master bedroom and a utility room occupy the centre of the plan at ground level, with four bedrooms located directly above in the former hay loft.

“The choice of interior materials expresses the same desire for rusticity as the exterior: breeze blocks, battens, exposed concrete slabs, and so on,” said the architect.

“The bedrooms nestled under the timber work, like perches, in the place where the hay was stored, allow the ground floor level to be almost entirely liberated of any partitions,” he added.

“This large living area spanning the full surface of the house places the occupant in a position where they are surrounded by nature.”

Antonin Ziegler founded his Paris-based architecture practice, alongside his visualisation studio 213613, in 2012.

Ziegler, who specialises in domestic architecture, previously designed a blackened-plywood library and garage for another house in northern France.

Photography is by David Bourreau unless otherwise stated.