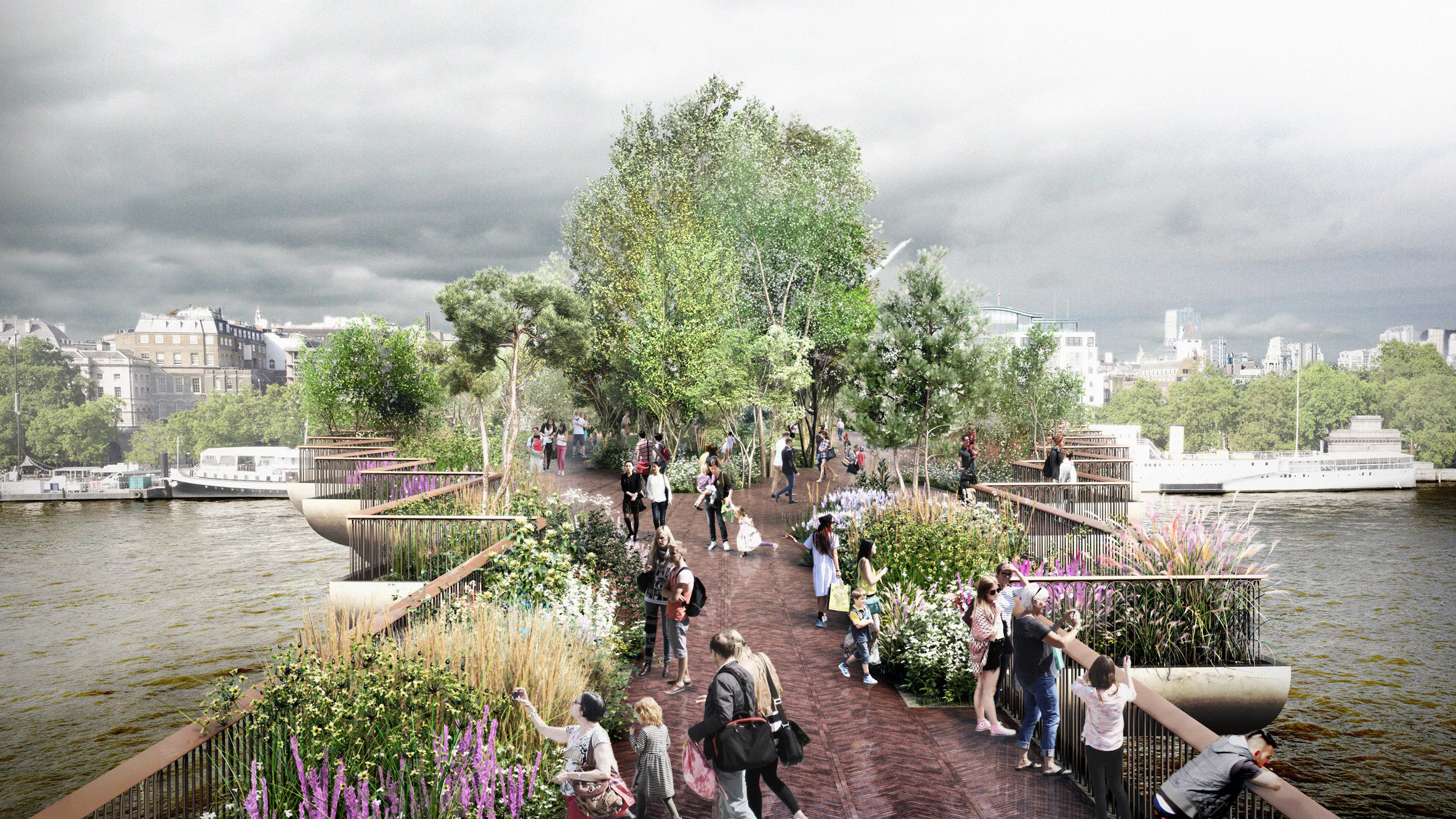 Apple store was proposed for Garden Bridge in return for sponsorship

Boris Johnson had secret talks with Apple over a ‘mad’ mid-bridge store during a 24-hour visit to the tech company’s San Fransisco headquarters to secure funding for the Thomas Heatherwick-designed Garden Bridge.

The idea for an Apple retail store on the middle of bridge was suggested by the tech giant in return for sponsoring the project, according to newly released transcripts from the London Assembly.

The plant-covered Garden Bridge was set to span the River Thames between Temple and the South Bank, but was cancelled over funding concerns earlier this year following an independent enquiry carried out by Labour politician and former chair of parliament’s public accounts committee Margaret Hodge.

The bridge was a pet project of former London mayor Boris Johnson, who made the whistle-stop visit to California in February of 2013.

He was accompanied by his then chief-of-staff Edward Lister and Isabel Dedring, the deputy mayor for transport at the time.

Heatherwick also attended the meeting. The designer was already in the building on a trip paid for by Apple to discuss the use of iPads in city management systems, according to the documents.

Challenged by Hodge in the Garden Bridge review, Lister said “there was a degree of confidentiality” to the meetings between Johnson and representatives from Apple.

“The mayor felt there was sufficient opportunity to go to Apple and discuss it with them and there was a fair chance that Apple might sponsor the whole bridge,” he told Hodge.

“Basically it was, we do this, you know, we call it the Apple Bridge and you pay for it, chum,” added Lister. “It was a pretty good idea but it all came to naught.”

The Garden Bridge itself came to naught, having been mired in controversy since Heatherwick’s designs were unveiled in 2013.

Originally given a price tag of £60 million, estimated construction costs ballooned to £200 million according to Hodge’s report, which was commissioned by current London mayor Sadiq Khan.

Set up as a charity, the Garden Bridge Trust secured £60 million of public money for the project. The rest of the funds were meant to come from private donors, but it only managed to raise £69 million from backers such as Sky.

The transcripts from meetings held by Hodge for the inquiry also show that Google had been planning a multi-million pound donation to the bridge before it was scrapped.

Kahn pulled the plug on the project in April, following the advice of Hodge’s review, which found a funding gap of £70 million that put the taxpayer at too much financial risk.

At the time, £37.4 million of public money had already been spent on the 367-metre-long bridge. Combined with the funding underwritten by British government, the total cost to the taxpayer was £46.4 million.

The deputy mayor of Paris recently spoke out against the doomed project, criticising London for its private sector involvement in managing its public projects.

Along with financing issues, concerns were raised over everything from the tendering process to confusion over what the bridge was actually for.

The report found that Dedring and Richard de Cani, former director of planning for Transport for London, biased the selection process towards Heatherwick’s design.

Dedring stepped down from her government role in 2016 to become the head of transport at Arup, the engineering firm involved in the Garden Bridge pitch. De Cani is now Arup’s head of planning for the UK, Middle East, and Africa.

The Garden Bridge was championed from the get-go by actress and activist Joanna Lumley, a childhood friend of Johnson.

In the review, Lister bemoaned that Lumley had not been included in the fruitless trip to meet with Apple.

“We should have taken her. She could have worked her wonder on them,” he said.

British designer Thomas Heatherwick first unveiled designs for the Garden Bridge in 2013. Even before its was given planning consent in 2014, the project was blighted with a multitude of funding issues and questions about how it would be used.

The post Apple store was proposed for Garden Bridge in return for sponsorship appeared first on Dezeen.