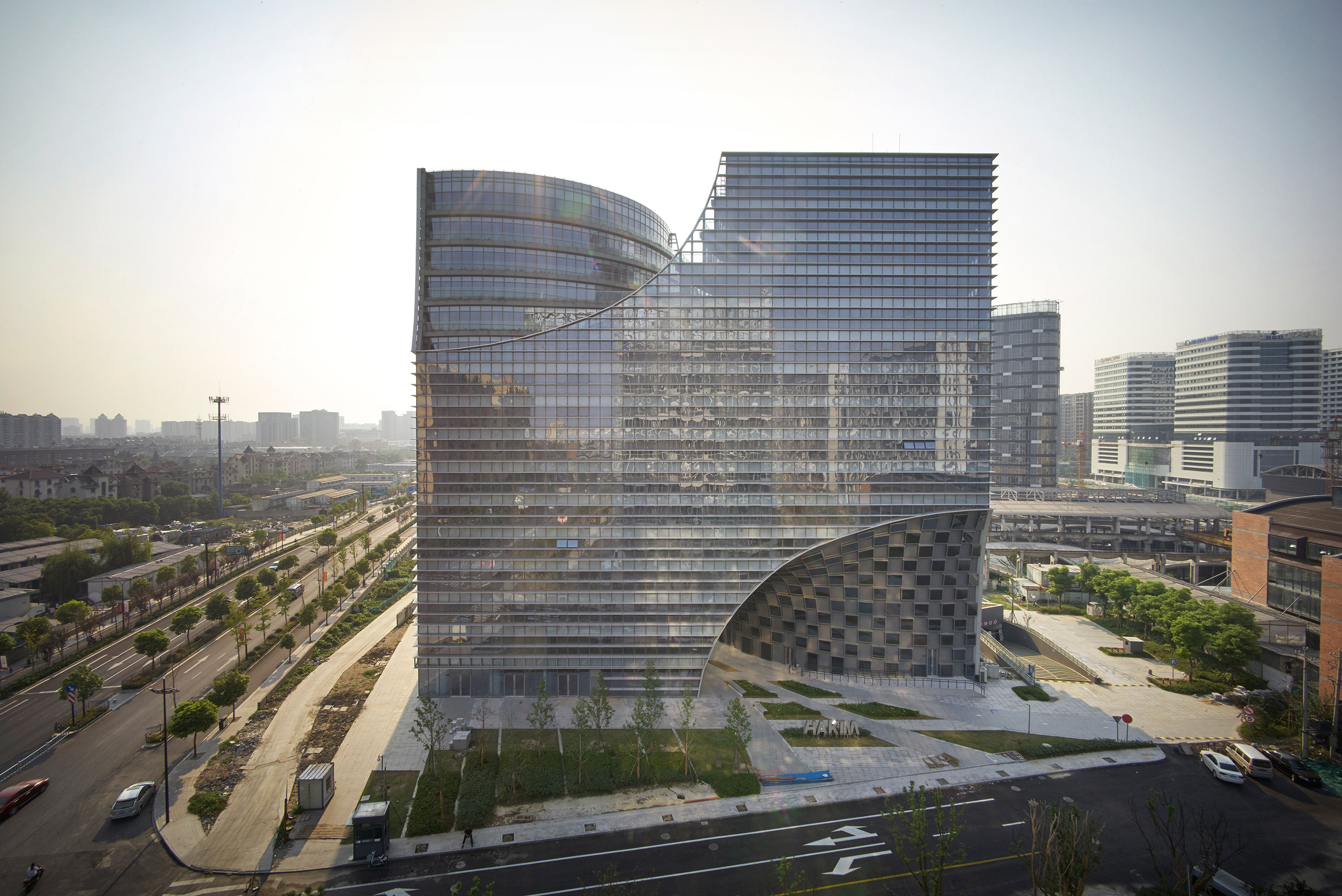 Two massive voids cut diagonally through this office tower in Hangzhou, China, by JDS Architects to create an arched pathway underneath and a stepped park on top.

The “H-shaped” building – created by its two voids – hosts workspaces, along with shops, a restaurant and a post office.

JDS Architects carved the diagonal pathway under the building to link the historical market hall on one side – which is being renovated – and a public green space on the other.

Triangular patches of greenery are slotted along the path as a continuation of surrounding parks, while long benches are intended to invite passersby to pause.

“The design engages with Hangzhou’s rich and diverse architectural history by reinterpreting the traditional Chinese gateway and reconnecting with the city’s tradition of proximity to nature,” said De Smedt, who won a competition to design the building.

“The path under the building is made to establish and enhance a connection throughout the overall masterplan,” he explained, “transforming the building from a hindering wall of office space to a geometry that facilitates circulation; the design of this social amenity gives the building its unique identity.”

Concave in plan, the walkway splits the lower floors of the 23,600 square-metre building into two to create quarter-circle plans. Windows popped out from the curved wall above the walkway provide views between the work spaces and the public pathway.

“By lifting its mass into an arch the building recreates a gateway between two surrounding public spaces rather than a hindering wall of office space,” said the architect.

“The double-curved surface of the arch and the graphic pattern of green space invites passersby to meander through.”

The roof void creates a green park on a series of stepped terraces –  a reference to the ancient Chinese rice-field landscapes.

Oriented in the opposite direction to the pathway below, the opening provides maximum sunlight and views for office workers.

The staggered landscape also acts as rainwater retainer, which re-uses water to help cool down the building.

Two vertical circulation spaces serve as the main structural supports and brace the lower floor plates. The middle floor plates span these two cores like a simple beam to create a stable platform for the upper floors.

JDS Architects is based in Brussels, Copenhagen, Belo Horizonte and Shanghai.

Other projects by the firm led by Julien De Smedt include an angular concrete community centre in Lille, a hump-shaped home in the Jura mountains and a Seoul block featuring a facade of cube-shaped balconies.