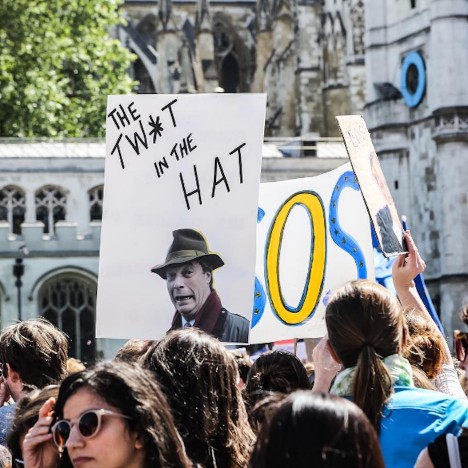 Brexit crisis: British architects and designers were among tens of thousands of people to protest against a UK exit from the European Union in London on Saturday.

Organisers put the number of attendees at the demonstration at 50,000, while the Metropolitan Police’s estimated it was closer to 30,000.

Brexit vote is a “nightmare” say leading architects and designers

“If you voted to Leave you have been deceived,” Self captioned an image of protesters at Parliament Square. “You won’t get what you want, and we will all be much worse off. We must now unite and try to avoid a #Brexit catastrophe.”

Protesters gathered in Park Lane from 11am and marched to Parliament Square, which was was completely full by 2:30pm.

Moussavi, the founder of Farshid Moussavi Architecture, was also among the throng. She shared an image of herself holding a placard that read “love not leave”.

Other slogans captured on Instagram included “EUryone welcome”, “The people have the power to redeem the work of fools” and “Stop playing with our future”.

Fraser, a design commentator and author, shared images of a banner painting session as well as the protest itself. “So proud of my gang,” he captioned one image with the hashtags #marchforeurope and #bettertogether.

London, Scotland and Northern Ireland all voted in favour of remain, as did all of the British designers and architects who spoke to Dezeen about the issue.

Designer Nelly Ben Hayoun urged fellow creatives to join a demonstration in central London last week, which was eventually cancelled on safety grounds after more than 50,000 people RSVPed to a Facebook invite.

Meanwhile, membership body the Creative Industries Federation is organising a series of emergency sessions to decide on a tactical course of action for the sector.