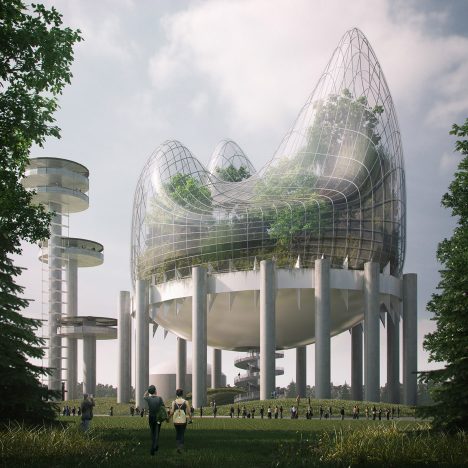 A proposal to add a giant curvaceous greenhouse on top of the pavilion designed by Philip Johnson for the 1964-65 World’s Fair has won a competition to suggest uses for the abandoned structure.

The New York State Pavilion Ideas Competition gave entrants free reign to imagine how the Queens landmark could be repurposed for the public.

Seattle architects Aidan Doyle and Sarah Wan triumphed with their Hanging Meadows design, which proposes placing a huge transparent top on part of the pavilion and turning it into a biome – similar to those at the UK’s Eden Project and Singapore’s Gardens by the Bay.

The concept would make use of the largest component in American architect Johnson’s concrete complex – made up of a ring supported by thick columns, from which cables are strung to form a canopy.

It sits beside three towers that were depicted as spaceships in the 1997 sci-fi comedy film Men In Black.

Doyle and Wan envision a gridded “dome” structure that is shaped to form three curving peaks and would create an elevated greenhouse underneath.

Visitors would enter the gardens via a spiral staircase leading up from the ground to the underside of the addition, where classrooms and a planetarium would also be housed.

Inside, plants native to the region would grow at various levels – accessed and viewed from a series of pathways.

“This project seeks to rekindle the powerful legacy of the NY State Pavilion by repurposing the original structure to create a suspended natural environment,” said the duo. “Hanging Meadows will collect, organise and exhibit flora native to particular parts of the Northeastern US.”

Second place in the competition was awarded to New York-based Javier Salinas, who suggested transforming the location into a civic hub, while third prize went to Indian duo Rishi Kejrewal and Shaurya Sharma‘s community marketplace proposal.

The winners were chosen from over 250 submissions by a panel of judges from the architecture and design community.

Cesar Juarez and Alida Rose Delaney won the category recognising entries from Queens, and the proposal from Houiji Ramzi of France was named the Fan Favourite Winner following an online vote.

These are on show at the Queens Museum until 28 August 2016. The competition was organised by America’s National Trust for Historic Preservation and People for the Pavilion group.

Other conceptual proposals for New York include an idea to surround Central Park with a vast “sidescraper”, while new public spaces that are under development in the city include Thomas Heatherwick’s Pier 55 park and the subterranean Lowline.

Images are provided courtesy of the National Trust for Historic Preservation and People for the Pavilion.