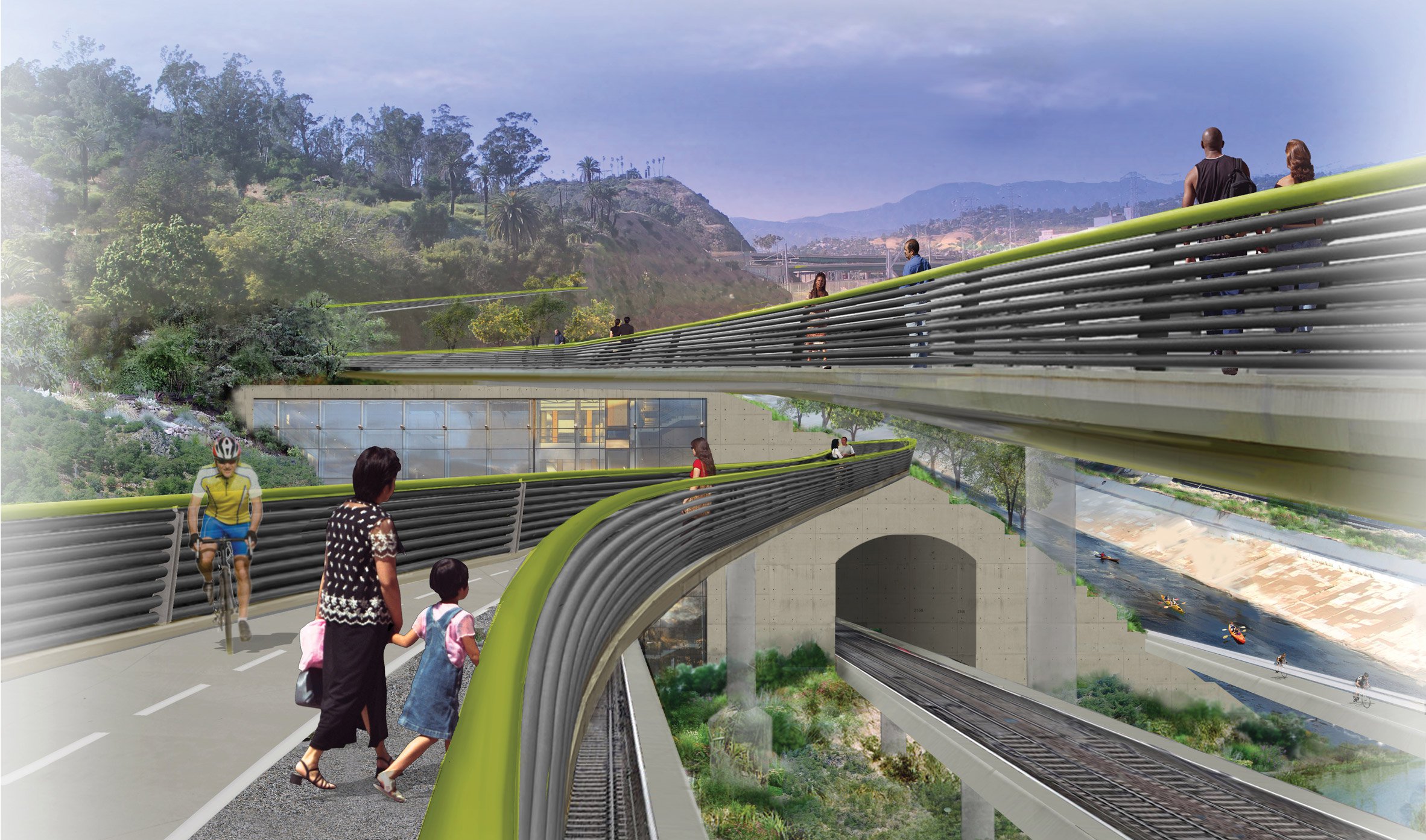 Colourful playgrounds, undulating pathways and a spot for kayaking are among the proposals made by seven architecture firms to revitalise areas along the Los Angeles river.

The LA River Downtown Design Dialogue celebrates the 10th anniversary of the Los Angeles River Revitalisation project, which Frank Gehry is also working on. The project is designed to overhaul areas along the barren canal-like waterway that weaves through the Californian city.

Led by the Bureau of Engineering and Mayor Garcetti’s Office, The City of Los Angeles assigned each firm, including Gruen Associates, WSP, CH2M, Chee Salette, Mia Lehrer + Associates, AECOM and Tetra Tech, with a mile-long stretch of the river to revitalise.

In their proposals the firms were required to imagine new ways in which to improve the public connection to the river, while taking into account projects that are already underway and future plans.

Assigned a mile that runs between Barclay and Spring St, the scheme by local firm Gruen Associates integrates fields and public pathways with the existing railway yard.

WSP’s proposal lines the area between Spring St and Cesar Chavez Ave with a walkway, along which terraced seating will overlook the river and areas of planting. Parts of the river will be widened to curve into the pathway, while stepping stones will provide a bridge across the water.

Other parts of the scheme include a bridge that will lead from the roadside to an outlook over the river, while an abundance of trees will buffer the rail track from the promenade.

In the next section, CH2M proposes a new bicycle path to replace an existing one that has been closed, and includes look-out points and cafes.

In the section reimagined by Chee Salette, a crossing made up of long platforms will allow pedestrians to walk along the middle of the river. Vegetation will be planted between each of the sections and continue up the tiered seating on the western bank.

Between 4th St and 7th St, Mia Lehrer + Associates’s scheme includes an undulating pathway that leads to a launch pad for kayaking. It will run alongside the huge 670 Mesquit complex that BIG has designed for LA’s Arts District.

AECOM has designed brightly hued pathways that loop around four different play areas, including a rock-climbing wall, a basketball court and a bike park.

The last stage, designed by engineering firm Tetra Tech, includes a glazed walkway with a restaurant, and a new cycle pathway that meets with the riverside.

Tetra Tech are the firm behind the river’s original redevelopment scheme – the Los Angeles River Revitalization Master Plan (LARRMP) – that was approved by the city in 2007.

The scheme is meant to serve as a blueprint for how to manage the river and was approved by the LA City Council. Gehry, who was commissioned in 2009 by the Los Angeles River Revitalization Corporation (LA River Corp), a nonprofit entity created by the city, will reportedly update the scheme to create a masterplan to improve the river corridor and make it an “attractive outdoor destination”.

The LA-based architect, who placed at number 34 on the Dezeen Hot List, reportedly started working on the project in 2014, although his involvement was not publicised until 2015.

His selection was met with huge criticism. The LA Times architecture critic Christopher Hawthorne said that it made “zero sense” given his portfolio, while a Southern California landscape architect said Gehry lacked expertise and public input.

Frank Gehry revealed as designer of masterplan for LA River