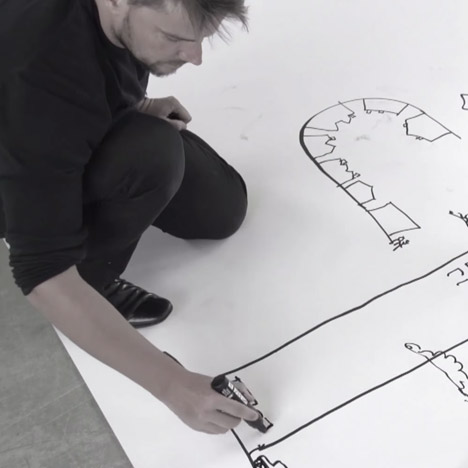 Architecture should be more like Minecraft, says Bjarke Ingels

Movie: the founder of architecture firm BIG explains his theory of “Worldcraft” – creating architecture that focuses on turning “surreal dreams into inhabitable space”.

In a movie filmed for the Future of Storytelling summit, Danish architect Bjarke Ingels says that architecture needs to to more to allow the public to “transform their own environments”, using the same principles as popular computer game Minecraft.

“More than a hundred million people populate Minecraft, where they can build their own worlds and inhabit them through play,” says Ingels.

“These fictional worlds empower people with the tools to transform their own environments. This is what architecture ought to be,” he says. “Architecture must become Worldcraft, the craft of making our world, where our knowledge and technology doesn’t limit us but rather enables us to turn surreal dreams into inhabitable space. To turn fiction into fact.”
The Future of Storytelling in an annual invitation-only event held in New York, featuring talks from a wide range of speakers on how stories are being used to shape the meaning of everyday life.
Ingels was among the speakers for the 2014 edition, which also featured Buzzfeed founder Jonah Peretti, Felix Barrett, artistic director of theatre company Punchdrunk, and Robert Wong, chief creative officer at Google Creative Lab.

“If documentary is to document our world as it already is, fiction is to fantasise about how it could be. In that sense, architecture is the fiction of the real world,” claims Ingels in the movie. “Turning dreams into concrete reality with bricks and mortar. Architecture is the canvas for the stories of our lives.”
Ingels’ firm BIG is currently working on a number of high profile projects internationally – including a $2 billion (£1.3 billion) overhaul of the Smithsonian Institution campus in Washington, a flood defence system for New York and a public square for London’s Battersea Power Station redevelopment.

In the movie, he draws cartoons of his firm’s projects in his native Denmark and in New York, including the Mountain Dwellings apartment buildings in Copenhagen. He compares this development to the ideal home of a fictional character in the 2010 movie Inception, a film in which architects build imaginary worlds inside people’s dreams.
“The architect hero Cobb explains how he and his wife wanted to live in a house with a garden but prefer to live in high-rise. In real life we would have to choose he says, but in a dream we could get it as we wanted it,” explains Ingels.

“By turning the parking into a man-made mountains of cars we can turn the stack of homes into a cascade of houses with gardens, penthouse views and big lawns. Cobb’s dream home made in real life.”
Ingels describes this unconventional combination of building elements as an illustration of his firm’s “bigamy” theory.

“You can take multiple desirable elements that might not fit together, or even seem mutually exclusive like the garden home and the high-rise, and merge them together into a new genre. You don’t have to remain faithful to a single idea, you can literally marry multiple ideas into promiscuous hybrids,” he says.
“The beauty is that architecture not only allows you to dream stuff up. It also allows you to alter the facts.”

Other examples include the “court-scraper”, which combines “the urban oasis of the courtyard with the extreme density of a skyscraper into a new warped hybrid of the two”. This idea is behind the design of West 57th, a 600-apartment block with a rectangular plan that rises up in one corner to form a tower nearly 150 metres high, which is currently being built in New York.
He also draws the 8 House, an apartment block with a figure of eight plan that residents can cycle up, and the Amager Bakke Waste-to-Energy Plant – a waster-burning facility with a roof-top ski slope.
“This sounds like science fiction, but this is the world changing potential of architecture,” says Ingels. “In Venice they sail in gondolas through the streets and in Copenhagen they ski on their power plants that turn trash into electricity. A weird dream has crystallised into concrete reality.”
The post Architecture should be more like Minecraft, says Bjarke Ingels appeared first on Dezeen.