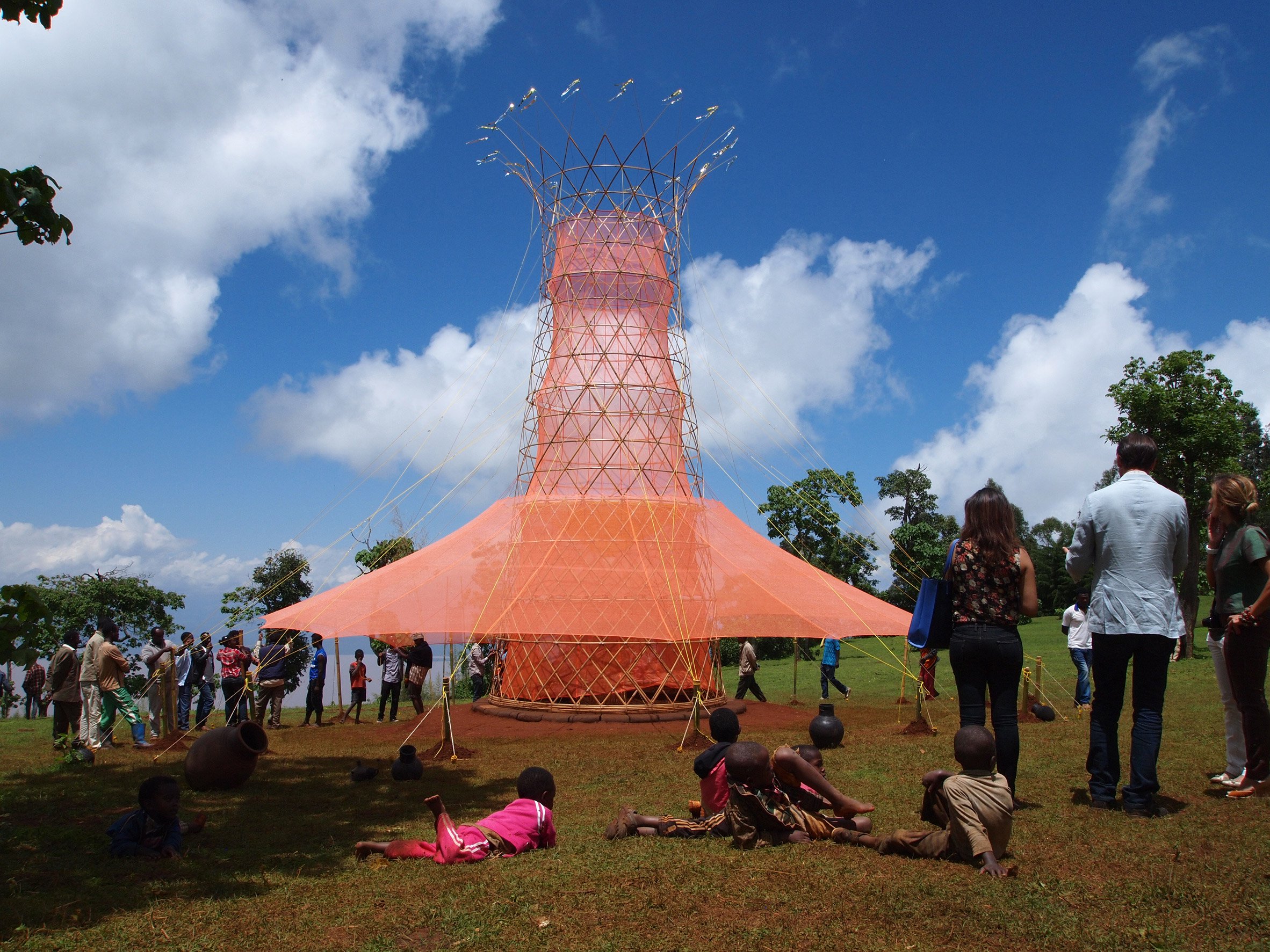 Through the Warka Water project, Vittori is investigating alternative water sources for remote communities without access to running water.

“Warka Water is a philosophy looking at the environment and different possibilities to collect and harvest water in a sustainable way,” he explains in the movie, which Dezeen filmed at his studio in the countryside outside Rome.

Vittori is currently developing a lightweight wooden tower – which is quick and cheap to build without any power tools – that harvests water from the atmosphere via condensation.

The tower consists of a bamboo frame supporting a mesh polyester material inside. Rain, fog and dew condenses against the mesh and trickles down a funnel into a reservoir at the base of the structure. A fabric canopy shades the lower sections of the tower to prevent the collected water from evaporating.

“Warka Water is currently represented by a tower that reaches up to the sky to collect moisture from the air and brings it down by gravity to the people,” Vittori says.

The performance of the towers varies depending on the weather, but Vittori’s aim is to create a structure that would enable the community to extract up to 100 litres of water a day without the reservoir running dry.

Vittori got the idea for the project after visiting isolated communities on a high plateau in the north east region of Ethiopia and observing how far they had to walk to collect water, which was often contaminated with animal and human waste.

The project is named after the warka tree that grows in the region.

“The idea of the project came out from visiting a small village called Dorze in Ethiopia and seeing women and children walking for kilometres and kilometres every day to bring some water home,” he explains.

After developing a series of experimental prototypes from 2012 onwards, Vittori installed his first pilot tower in Dorze in 2015 and is currently further developing the design.

“The entire tower is very light – it’s just 80 kilograms – and it is 12 meters high, so that is the big challenge,” Vittori explains. “How do we make it possible to build without scaffolding, without machinery, only by constructing by hand?”

Advances in 2D and 3D modelling software have enabled him to iterate the design relatively quickly, Vittori says.

“In order to achieve this, the real technology is in the software,” he explains. “The design is basically parametric. Once we have designed the shape, we can improve it very easily without having to design it again [from scratch]. In a few seconds, we already have another option.”

Once he has fully refined the design, Vittori says he will make it available for anyone to use.

“An important part of the project is that this is an open-source concept,” he says. “The local community will be trained how to make it, and they will be free to repeat it as much as they like.”

Future Makers is a collaboration between Dezeen and Autodesk exploring how designers are harnessing new digital tools and advanced manufacturing technology to pioneer the future of making things.

In this and the next three movies in the series, Future Makers is focusing on designers who are using these new techniques to solve pressing global challenges, from climate change to energy access.

You can watch all the movies in the Future Makers series on our YouTube playlist: