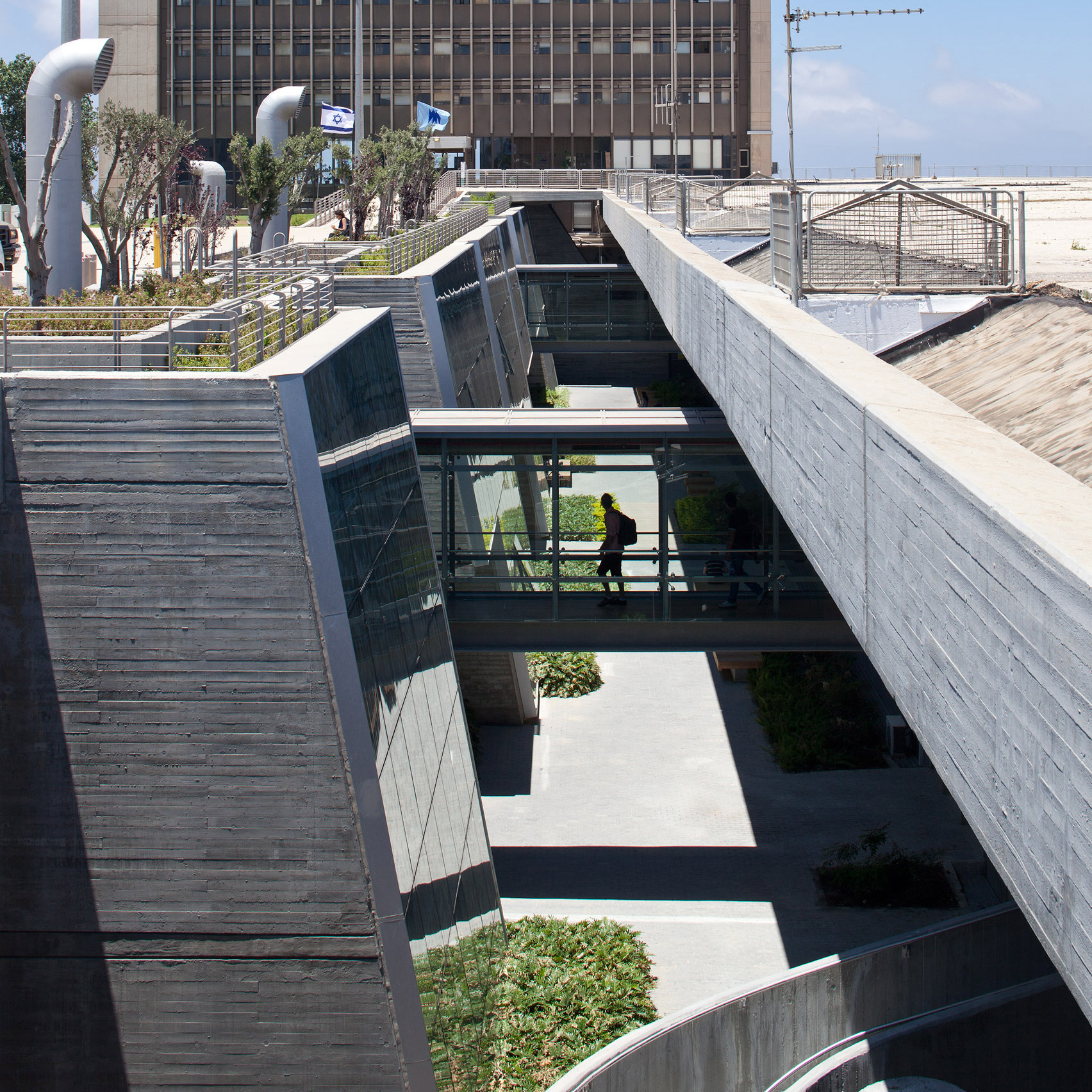 Lerman’s studio won a competition in 2002 to oversee the renovation and expansion of the Younes and Soraya Nazarian Library, and spent over a decade working on its design and implementation.

The library is accommodated within a campus designed in 1962 by Brazilian modernist Niemeyer for a site on top of Mount Carmel.

Niemeyer’s masterplan featured a tower that rises above an enormous rectangular plinth containing the library and other facilities arranged around a series of hallways and communal spaces.

A group of forms planned to sit on top of its plaza-like roof would have lent the university a similar aesthetic to that of the architect’s National Congress in Brasília, but these additional structures were never built.

Despite his lack of involvement in the latter stages of the project, the university’s main buildings retain the hallmarks of Niemeyer’s modernist style.

The brief for Lerman’s interventions was to upgrade the library without compromising its distinctive character.

Attempts to meet the demands of increasing student numbers over the past 45 years had resulted in the compartmentalisation of the existing library’s interior. Lehman’s studio reinstated the building’s original open plan, allowing sunlight and natural ventilation to once again flow through the interior.

The project brief also called for the creation of a new building to house administrative spaces, as well as for the introduction of a central circulation space that accommodates a new main entrance.

“The proposal made use of the brief in order to initiate a constructive process of healing,” said the studio.

“Both ends of the building – the rigid romantics of the original plan, as well as the chaotic maze of its current ‘un-plan’ – were analysed in order to articulate an intervention that aims at diversity, rather than forcing dialogue.”

An existing ventilation yard was repurposed to create the long and narrow patio that connects the old and new buildings on either side.

The new wing is slotted beneath the raised parking plaza and has just one facade looking onto the main building. This ensures it is only visible from within the existing library and doesn’t add further unnecessary elements to the campus.

“In contrast to the seemingly endless straight line of the original facade, which that was left untouched, the new facade twists and bends to create particular small-scale hideaways,” said the architects.

“Thus the space of the patio becomes a third and autonomous category of space that invites the visitor to participate in the spatial dialogue between the two opposing sides underneath the vertical landscape of the tower,” they added.

Board-marked concrete wrapping around the volumes that project into the central void echo the materiality of the original building, while glazed surfaces reflect dappled light into this shaded, landscaped patio space.

The project, which was completed in 2014, recently received the bi-annual Rechter Prize for landmark Israeli architecture projects.

A hotel designed by Oscar Niemeyer in Rio de Janeiro recently reopened as a luxury resort after being closed for 20 years, and the architect’s Museo de Arte Contemporáneo de Niterói was used as the setting for a Louis Vuitton catwalk show last year.

Photography is by Amit Geron.