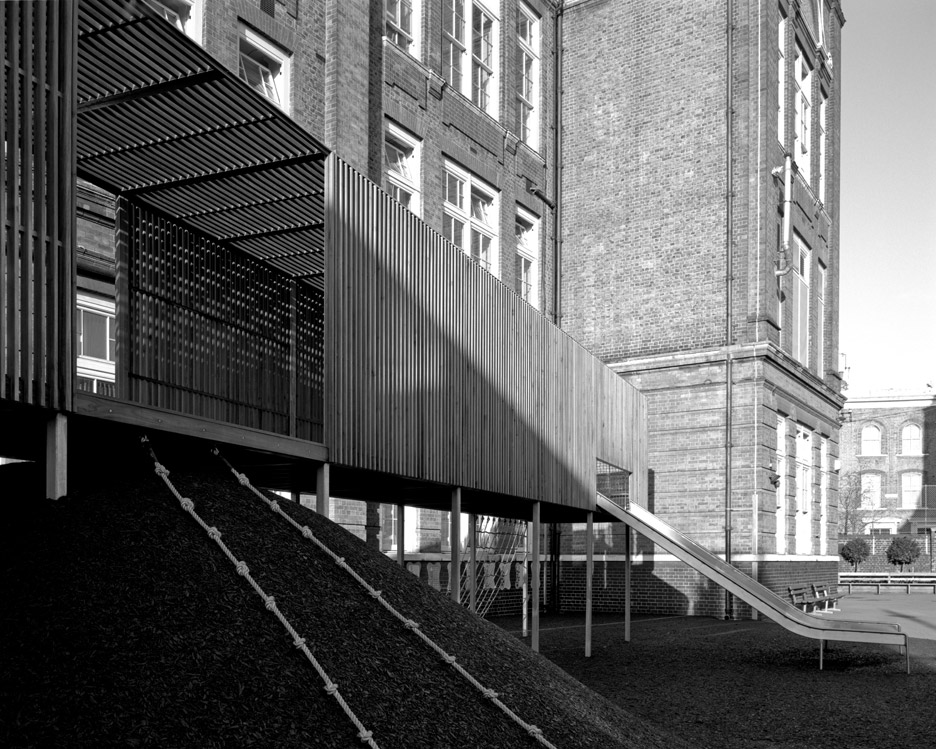 To provide children at this primary school with more room to play, London designer Asif Khan has created a stilted structure that stands two metres above the playground (+ slideshow).

Due to lack of space and increasing number of pupils, the pair realised that the school needed a more “unconventional” approach, as opposed to just buying new equipment.

“The school has been talking about new play equipment for a long time,” Khan told Dezeen. “The number of pupils has been increasing, but the play ‘footprint’ hasn’t.”

“Physically the outside space was too small,” he added. “We needed to increase the play area without impacting on the PE [physical education] area and existing access routes to the building.”

Khan began by running a series of workshops and homework assignments across the year groups to better understand what was missing.

“The children even self-organised a playground committee,” he said. “By the end of this process every child in the school designed a playground. Some of the ideas like unicorns were difficult to source.”

He found that many of the children wanted a quiet space – somewhere with flexible usage, but that was not out in the open.

As the teachers needed to be able to see the children, Khan conceived a design with vertical thermally modified American tulipwood and ash slats – creating the feeling of enclosure without hidden corners.

Because of its durable yet adaptable properties, timber was chosen to construct the majority of the structure. Recycled rubber tyre chippings provide a soft covering for the surrounding floor, and galvanised steel forms the structural frame.

“You’ll notice the structure runs a line along one of the exterior walls of the school,” said Khan. “By shifting the angle of the new structure we created a space in-between, as well as softening the backdrop of the existing 17.5-metre-high elevation.”

A hill covered in the tyre chips leads up to the play area, and was created to provide a moment of “natural topography”. Children clamber up the hill aided by a rope on one side, and can reach the bottom via a metal slide on the other.

“The hill form is from Aso in Japan, a miniature of a mound that Rinko Kawauchi photographed,” Khan added. “We made a 3D print of it and gave it to the man in the mechanical digger.”

Khan has also designed one of the four Summer Houses that will accompany this year’s Bjarke Ingels-designed Serpentine Gallery Pavilion in London’s Kensington Gardens.

Drawing upon the similarities between his design for the summer house and the play area, Khan noted that both projects have moments of “choreography and freedom”.

“In the school it means entrusting the children as explorers,” he added. “In both, the users are welcomed to define their own way through the architecture.”

Khan’s previous projects include a pavilion in the London 2012 Olympic Park that can be played like a musical instrument, and an installation in Melbourne’s Federation Square.

Photography is by Hélène Binet.