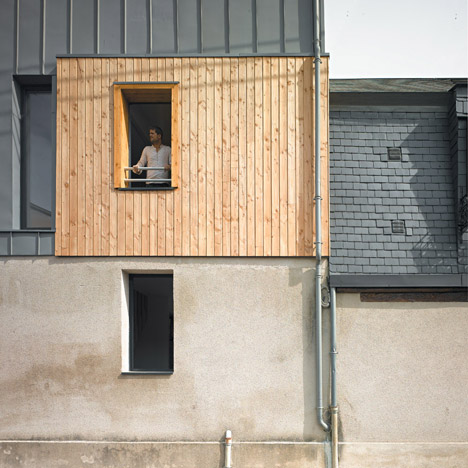 This small house in the French city of Tours by local architecture office Atelier 100architecture features a material palette of zinc panels, plaster and wooden boards that references its historical neighbours.

The house on Rue Losserand was designed by Mathieu Julien of Atelier 100architecture for a couple who wanted to create a rental property in the city’s ancient centre, and takes its visual cues from the materials used in structures nearby.

The sensitive location also necessitated a quick and dry construction so the architect worked with an engineer to develop a timber frame that avoids the use of structural metal and wet concrete.

“We had to make a building that was discreet and the construction process had to be very clean so it didn’t disturb the surroundings,” Julien told Dezeen.

The front wall of an existing single-storey flat-roofed garage was retained at the base of the new residence, which contains three storeys each of 20 square-metres.

The architect added a window in the wall looking onto the street and clad the structure above in zinc panels with a similar tone to the roof tiles of nearby buildings.

Plasterboard panels were left exposed on the gable end of the upper storey, which the architect said was a response to the planning authority’s request for a “less massive” detail than the proposed metal finish.

A section of the street-facing facade on the first floor is covered with pine cladding that denotes the position of the bedroom and continues the building line of the neighbouring homes.

The same pine wood is used to entirely cover the rear facade for reasons of “budget and simplicity” and to create a homogenous surface, which is interrupted only by windows and the home’s main entrance.

The doorway opens into an open-plan tiled living area with a fitted kitchen on one side and toilet on the other.

A staircase rising up one side of the building is built from rough construction planks with pine boards applied vertically to create a simple balustrade.

Large gaps between the vertical boards allow daylight to penetrate the stairwell from a narrow vertical window at first floor level.

The master bedroom and main bathroom are located on the first floor, with two smaller rooms fitted beneath the eaves on the upper storey.

Photography is by Brice Desrez.