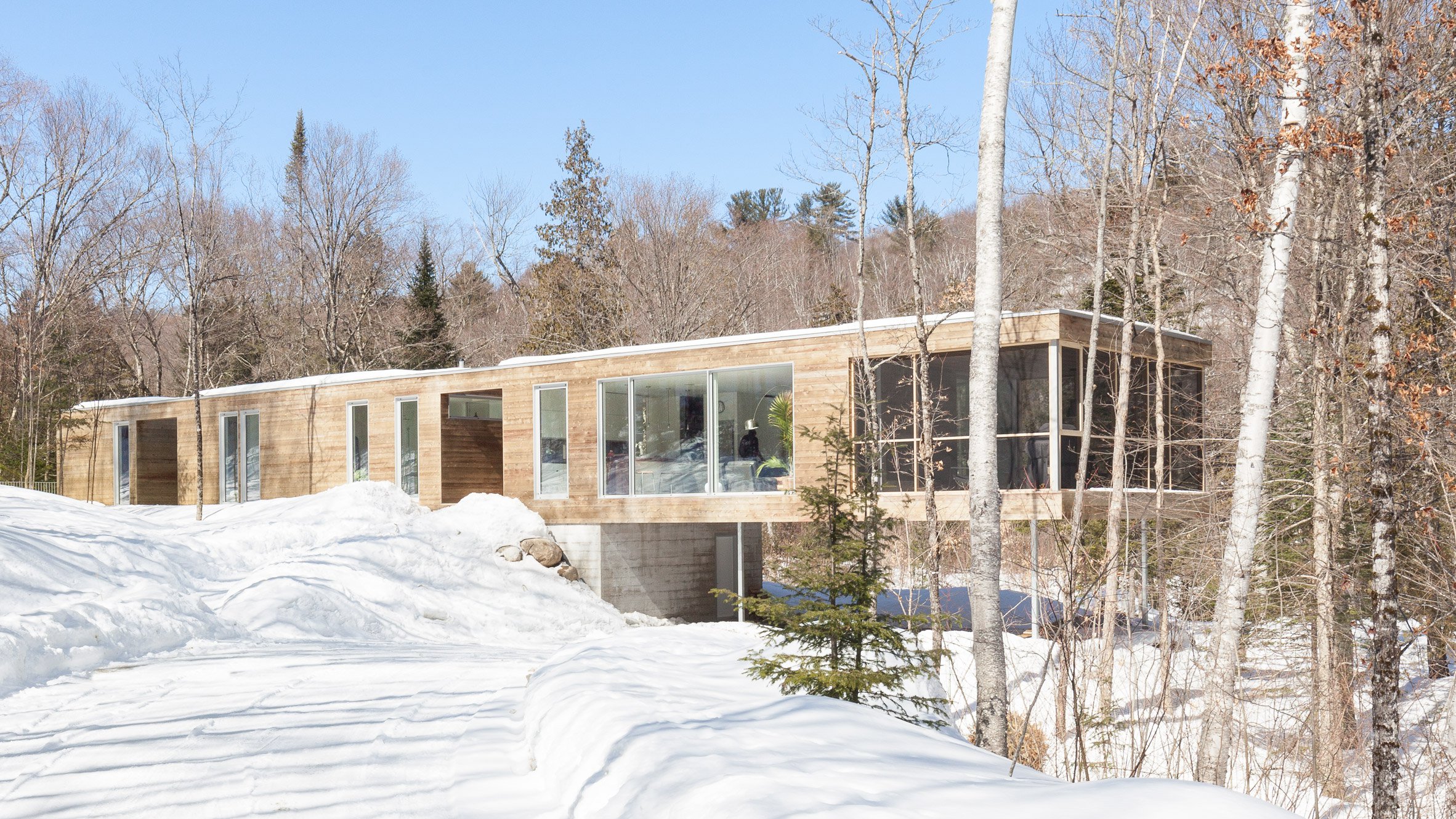 Two outdoor spaces bookend this longitudinal Canadian home by Atelier Pierre Thibault, which nestles into the ground at one end and is raised up on pilotis at the other.

La Louve, or the Wolf, is a small cabin that was recently completed for a family in Quebec’s Laurentian Mountains. The slender structure encompasses four bedrooms and two bathrooms.

“To highlight the site’s characteristics, La Louve is organised according to two distinct ambiances,” said Atelier Pierre Thibault. “Towards the mountain, the simple volume rests against the bedrock, while to the forest side, it is perched on slender pilotis hidden amongst the trees.”

The main entrance is at the centre of the home, which divides public and private areas. A small outdoor vestibule has a window into the kitchen, allowing residents to catch a glimpse of their guests arriving.

The organisation of the home’s public areas is an enfilade that culminates with an outdoor room, raised at the level of the trees. “This layout for common areas fosters family life while providing views to the landscape,” said the architects.

Between the screen porch and the interior living room, the architects included a massive board-formed concrete fireplace. It is used for the indoor and outdoor space, as it has openings on both sides.

The other portion of the home contains three children’s bedrooms that share a bathroom. The corridor leading to them widens in certain areas, providing small nooks for play or reading. “The kid’s rooms extends onto a landing illuminated by a large skylight, bringing in abundant natural light,” the architects explained.

The master suite occupies the end of the home, and is separated from the children’s rooms by a home office. This workspace faces out onto a small garden carved out of the home’s main volume.

A secondary terrace here is only accessible to the homeowners, who also enjoy their own bathroom and dressing room.

“The longitudinal house represents the continuation of a walking path,” said the architects. “You amble through the house as through the forest, passing through spaces that thicken and narrow, alternating between living spaces, small courtyards, and landscape sightlines.”

Horizontal wooden boards clad the simple geometry of the home’s exterior, while the interiors are rendered in stark white surfaces. Certain accent pieces, like a reclaimed wood countertop, provide contrast within the home.

Pierre Thibault has completed several minimalist residences in the province of Quebec. Others include a home split into two halves connected by a bridge and a home in the forest that captures views through a dramatic full-height curtain wall.

Photography is by Maxime Brouillet.