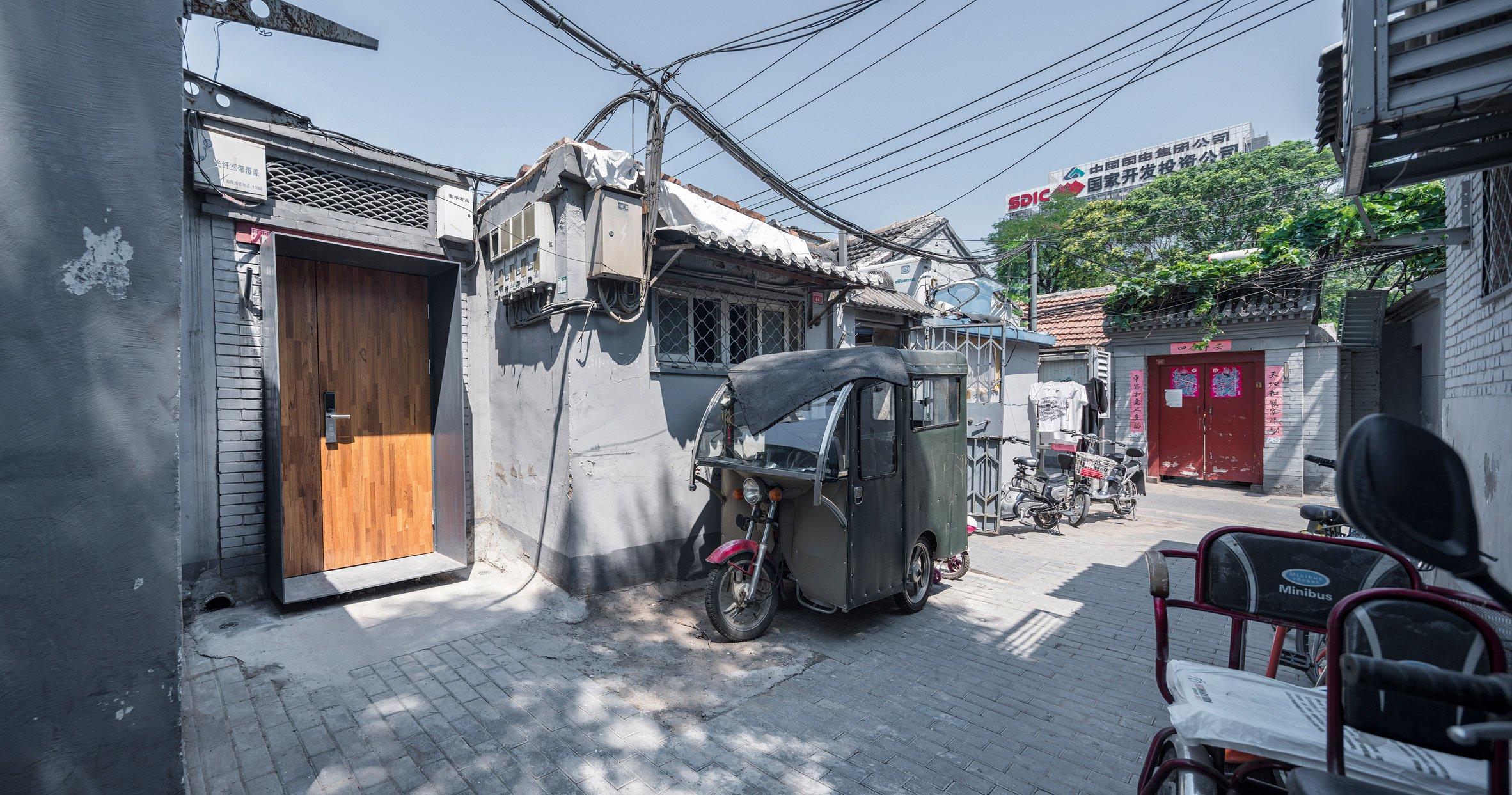 Dot Architects developed the Baitasi House of the Future for tech company Whaley, which focuses on smart homes and asked the studio to develop a building suited to the changing lifestyles of future customers.

“The boundary between home and society is blurred by the rise of the sharing economy, nomad workers and technology,” said the studio.

“Our lives are fragmented and cannot be accommodated by a fixed layout. The house of the future should represent such a lifestyle of young people, who can fluidly shift between work and home.”

Baitasi is one of the core areas during the annual Beijing Design Week, and is the site of co-living space inserted into a typical hutong courtyard as part of the Micro Hutong Renewal project led by architect Zhang Ke.

The site contained an existing 30-square-metre house and an 80-square-metre yard occupied by various illegal structures that were demolished to make way for the new addition and a usable terrace.

A decaying roof and partitions inside the timber-framed house were removed to reveal the original structure and allow for the introduction of a revamped flexible interior.

A pair of moveable furniture modules and another fixed module that each accommodate fold-down beds allow the interior to be reconfigured for various scenarios and activities.

The house can sleep three people in individual rooms, or the beds can be folded away and the units moved back against the walls to create an open area suited to use as a small office.

The mobile units are set on tracks and controlled by a smart TV that can also be used to adjust the lighting, curtains, security system and other home appliances.

“Technology should serve people, not the other way around,” said the studio. “Although the House of the Future is equipped with many smart devices, we would like the house to be warm and cosy, with all the tech hidden behind.”

The house’s location in a historic and busy neighbourhood necessitated the use of clean and lightweight construction methods that minimised disruption during building work.

For this reason, the architects utilised the open-source WikiHouse system to erect an extension that is positioned perpendicular to the existing house and contains a kitchen and toilet.

Wikihouse provides online templates that can be downloaded and used to create buildings made from wooden components that slot together and can be cut on any computer-controlled milling machine.

“Based on the strategy of minimal intervention, we used the WikiHouse system for the only new-built structure on site,” said the architects.

“It is lightweight and digitally fabricated. This faster and cleaner construction process suits the crowded and noise-sensitive neighbourhood very well.”

The process for assembling a WikiHouse structure was demonstrated during Milan Design Week in 2012, when a small wooden house was erected inside a department store.

A wooden doorway set into a slender metal frame subtly marks the entrance to the house from the alleyway. A brick-paved path leads between other buildings to the secluded courtyard.

A solid main door and a pair of glass doors set into the building’s new timber facade can be opened to connect the interior with the courtyard, which offers an additional living or working space.

The fitted-furniture modules incorporate shelving and storage, including space for folding chairs and tables that can be easily assembled to transform the layout of the main room.

“Compared to many futuristic designs, this tiny house is nothing close to futuristic at first look,” Dot Architects concluded. “But its humble appearance and user-adaptive interior may reflect something about the future in the ancient capital.”

The studio was also behind the design of a mobile home that resembles a quilted cube attached to the back of a tricycle, which it developed for a visual art exhibition in 2012.

The post Baitasi House of the Future features moving walls controlled by a smart TV appeared first on Dezeen.