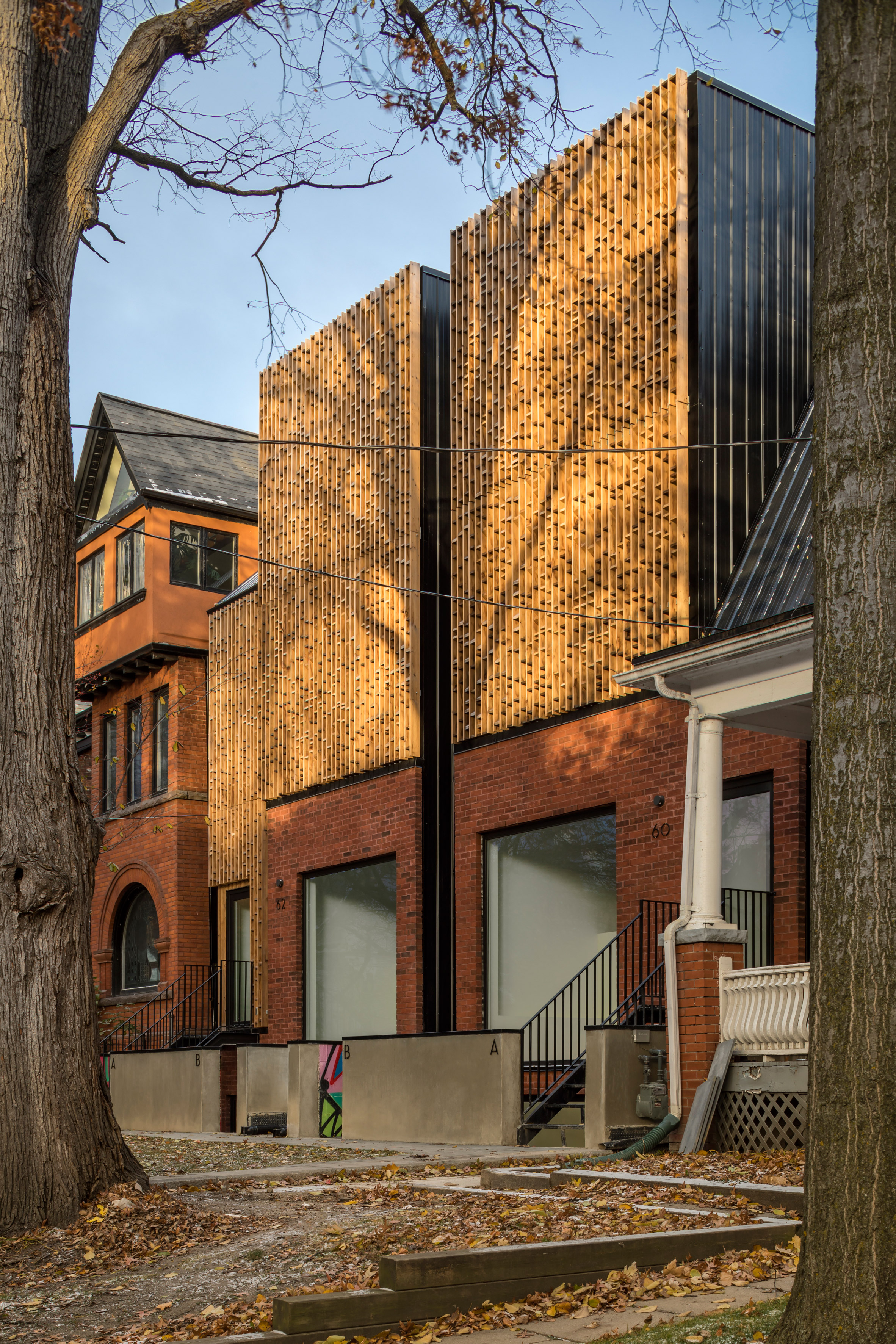 Canadian studio Batay-Csorba Architects has created a pair of slender residential buildings in central Toronto that pay heed to the craftsmanship found in the area’s historic architecture.

Called Double Duplex, the building is located in Parkdale – a historic district dotted with Victorian and bay-and-gable-style mansions dating to the 19th century. The neighbourhood is popular among artists.

Built on a narrow lot, the residence – which contains four apartments – was conceived in response to the city’s growing need for alternative housing models due to the surging cost of urban real estate.

“A proliferation of high and mid-rise condos have densified the urban core and serve as the predominant model for entry-level home ownership within the city,” said Batay-Csorba Architects, a local studio.

The townhouses occupy a property that was divided into two parcels. Each four-storey building encompasses 3,500 square feet (325 square metres) and contains two units.

By including two apartments within each townhouse, the property owners are afforded the option of renting out a unit or utilising it as a live-work space.

While designing the project, the team took cues from the surrounding bay-and-gable architecture and sought to update and reinterpret certain elements.

“Double Duplex pays tribute to the existing context and the beauty of its craft and local artistry by making contextual relationships through massing and geometry, along with texture and detail of paramount concern,” the architects said.

The lower half of the front facade is clad in brick, while the upper portion is sheathed in a brise-soleil that is meant to serve as a modern interpretation of historic architectural craftsmanship.

The screen – made of “bio-enhanced, rot-resistant and sustainable softwood” – provides privacy while still bringing in natural light.

“During the day, the light is filtered and illuminates the interior spaces with ephemeral dappled light effects,” the studio said. “At night, the screen reads as a decorative glowing lantern.”

The brise-soleil is angled in a way that produces multiple images as viewers pass by. It is “akin to the idea of cloud animals that we have as children”.

“For artists and poets of the Romantic period, clouds provided a metaphor for mobility and transcendence,” the firm said. “Clouds are as much a source of perception and transient states of mind as they are a meteorological phenomena. They mysteriously combine visibility and volume without space.”

The team sought to create a similar textured effect indoors by exposing columns, ceiling joists and ductwork. These elements are paired with a material palette that consists of wood, stainless steel and black-honed granite.

Rooms feature high ceilings and white walls, along with large windows that bring natural light to the depths of the narrow homes.

The lower-level apartments flow out to courtyards, which are are wrapped with walls adorned with vibrant murals by local artists.

Upper-level units are organised around a double-height atrium space. In the front of the apartment, a balcony overlooks the street, while a terrace in the rear is connected to the master bedroom.

Other residential projects in Toronto include the overhaul of a century-old brick house by Post Architecture, and a family home by Reigo and Bauer that features a hot pink doorway and black shingles.