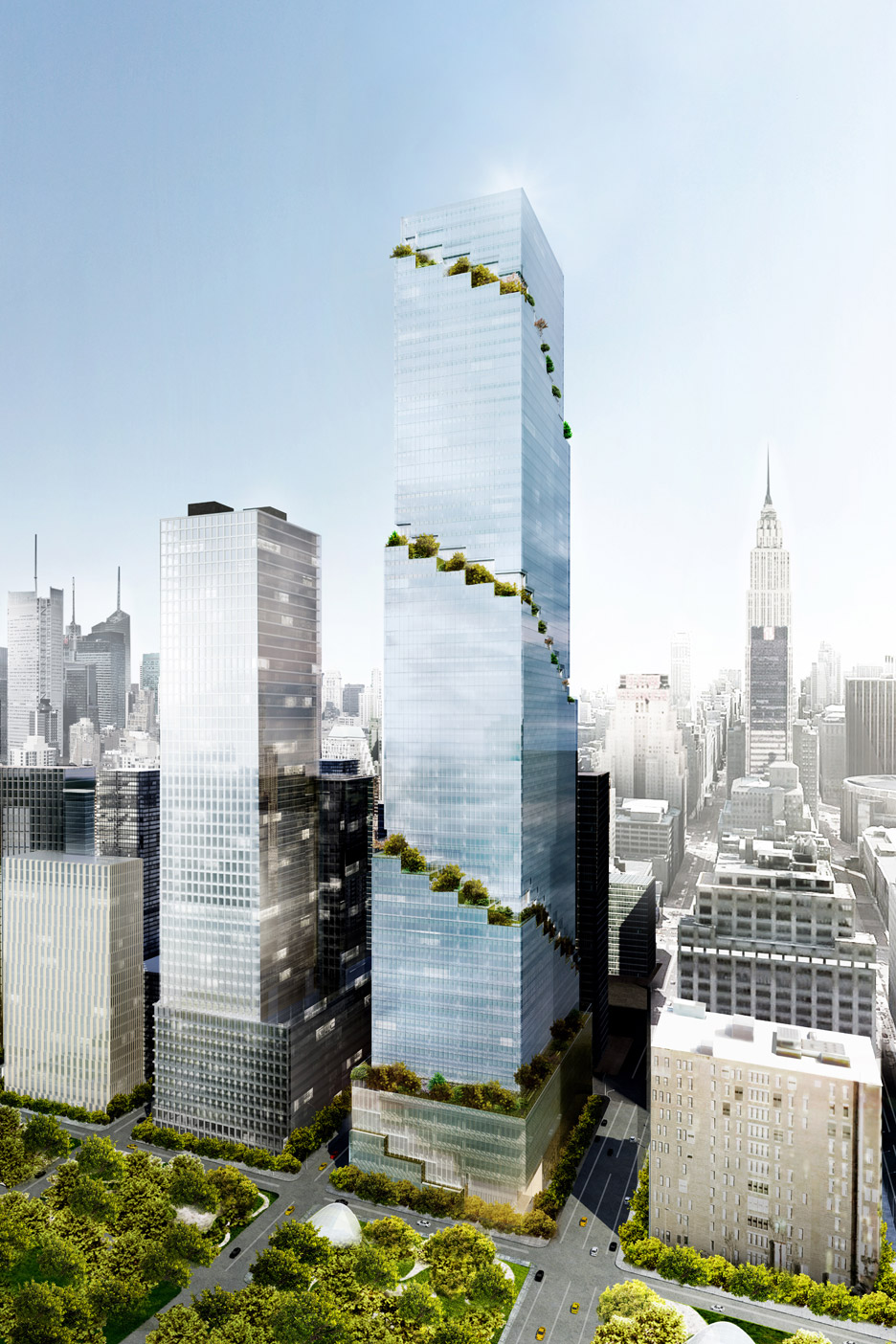 Bjarke Ingels Group has released a conceptual design for its latest project in New York, an office skyscraper wrapped in a ribbon of green terraces (+ movie).

Called The Spiral, the 65-storey glass tower is slated to rise at 66 Hudson Boulevard, as part of the massive Hudson Yards mixed-use development that is now under construction on the west side of Manhattan.

The tower will cover a full block, stretching from West 34th Street to West 35th Street, and from 10th Avenue to Hudson Park. It will be located near the intersection of the High Line elevated park and the 1.6 hectare Hudson Boulevard Park.

Climbing 306 metres, the tower’s design draws from both historic and contemporary design styles.

“The Spiral combines the classic ziggurat silhouette of the premodern skyscraper with the slender proportions and efficient layouts of the modern high-rise,” said Danish architect Bjarke Ingels, founding partner of BIG.

The tower’s signature element is a series of landscaped terraces that ascend in a spiral, forming a continuous green pathway around the building and providing tenants with outdoor space.

“The Spiral will punctuate the northern end of the High Line, and the linear park will appear to carry through into the tower, forming an ascending ribbon of lively green spaces, extending the High Line to the skyline,” said Ingels.

From the base to the pinnacle of the tower, every floor is designed to open up to the outdoors through “hanging gardens and cascading atria” that connect the open floor plates, Ingels added.

The tower will encompass 265,000 square metres. Amenities include double-height atria, expansive views of the city, and flexible layouts.

Floors can be opened up and adapted for tenants who want to occupy multiple stories. “This element offers an alternative to elevators, thus encouraging physical activity and enhanced interaction among colleagues,” said the developer in a statement.

The building’s six-storey podium will contain retail space totalling roughly 2,500 square metres, along with a large “amenity terrace” on the seventh floor. Ceiling heights in the building’s lobby will reach nine metres.

“Working with Bjarke Ingels and his team, we have designed a tower that offers stunning green spaces to all and will serve as a significant leap forward in the evolution of the modern, collaborative and sustainable workplace,” said Rob Speyer, CEO and president of Tishman Speyer.

The developer added that the building site is within close proximity to major transit hubs, such as Penn Station, and is just steps away from a stop for a newly expanded 7 subway line.

Hudson Yards is being constructed next to another major mixed-use development: Manhattan West, for which SOM has designed a trio of towers.

Danish firm BIG has unveiled a series of US projects since opening its New York office in 2010. Major projects in New York include the Two World Trade Center skyscraper in Lower Manhattan and the Via 57 apartment tower on Manhattan’s West Side. The firm also just unveiled its design of a police station in the Bronx.

Beyond New York, the firm is working on the new Google headquarters in Mountain View, California, which it is designing with Thomas Heatherwick, an office tower in Philadelphia, and a primary school in Virginia, among other projects.