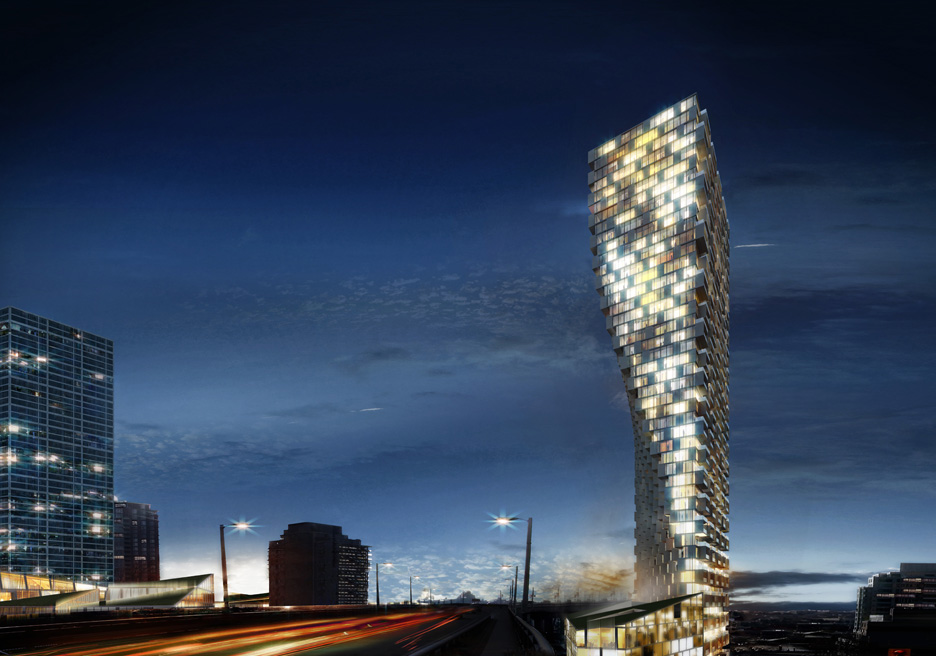 World Architecture Festival 2015: in this exclusive movie, architect Kai-Uwe Bergmann explains how BIG’s proposed skyscraper in Vancouver is designed to transform a site dominated by a motorway flyover into an attractive neighbourhood.

The Danish architecture firm‘s Vancouver House, which was named Future Project of the Year 2015 at World Architecture Festival earlier this month, will be situated adjacent to an overpass at the base of Vancouver’s Granville Street Bridge.

“The site is similar to a lot of cities,” says BIG partner Bergmann in the movie, which was filmed in Singapore by Dezeen for World Architecture Festival.

“The prime locations of the cities are built, so architects now deal with a lot of the residual spaces.”

The 49-storey residential tower’s distinctive twisted form was a direct response to the limitations of the site.

In order to create a 30-metre setback from the busy road, the tower will be much narrower at the base, before widening out at higher levels.

“We’ve tried to make the most of the site with all of its challenges,” Bergmann says. “So we started out small and then moved up to a larger top.”

The base of the tower will feature nine storeys of offices, shops and restaurants, which will spill out onto a series of public plazas that stretch underneath the elevated motorway.

Bergman says that the key to project was transforming these spaces into attractive places to spend time, which he says BIG hopes to decorate with large public art installations.

“The project is all about giving a wonderful city life to the street level,” he says. “Remember, this is an overpass of a bridge and in most cities this is not a very nice place. They don’t take advantage of these underneath spaces.”

“We can imagine an art installation that happens on the underside of this bridge, to make it a civic space for the city.”

This movie was produced by Dezeen for World Architecture Festival.

World Architecture Festival 2015 took place in Singapore from 4 to 6 November, alongside partner event Inside World Festival of Interiors. Dezeen is media partners for both events and will be publishing more video interviews with the winners over the coming weeks.