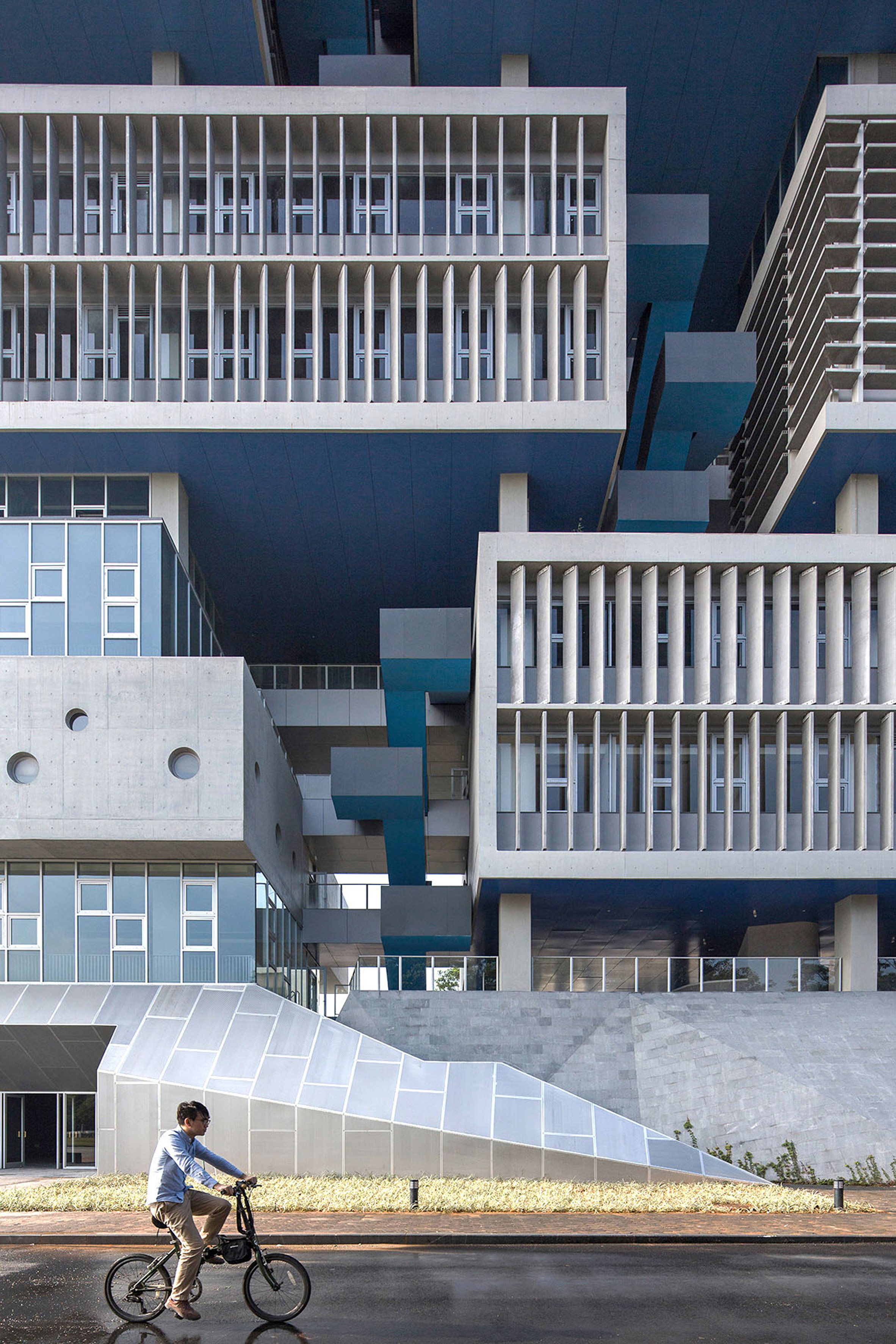 Boxy volumes with blue undersides shelter terraces in this deep-ocean research centre in Shenzhen, China, designed by Open Architecture to have sea-like features.

Beijing-based Open Architecture designed the Tsinghua Ocean Center for the Tsinghua University Graduate School, which is located in the University Town of Shenzhen in China’s Guangdong Province.

The architects wanted to create a vertical campus that integrated plenty of social spaces while also referencing the nature of the research, which focuses on the deepest part of the ocean.

Made almost entirely from concrete, the 60-metre-high structure features volumes that protrude from the front to shade the outdoor spaces underneath.

Exterior louvres on the front of these volumes are arranged in different orientations, with some placed horizontally and others arranged vertically.

They are intended to create a pattern of shadow and light that references French composer Claude Debussy’s orchestral composition about the sea, La Mer. The slats also provide shade in the subtropical climate and allow views outside from the laboratories and offices.

“The brise-soleil on the facade is organised according to ‘ocean’ by Debussy, varying its angles to produce a symphony of light play every day,” said the architects.

“The exterior shading devices also efficiently cut down the heat gain, yet still offers good views for the lab and offices,” they continued.

Underneath the volumes, the blue floors gradually change from a deep colour below to lighter ones above, not unlike the ocean at different depths.

Laboratories and offices occupy the boxy volumes, which are joined by staircases. However, some of the volumes contain meeting rooms, and these feature round porthole-like windows instead of louvres.

Shared levels are also integrated into the building. They include conference rooms, a brain-storming area, exhibition space, study rooms, cafes and plenty of greenery.

“As time goes by, the plants in these shared spaces will flourish and extend the greenery from the ground all the way up to the roof garden,” said the architects.

The two end shear walls, standing at 60 metres high, will be among the tallest fair-faced in-situ concrete walls in China, according to the architects.

The roof garden also features a stepped platform that offers a panoramic view of distant mountains and also glimpses of giraffes in the nearby Shenzhen Wildlife Zoo.

A deep-sea research tank is set beneath the entrance plaza. Three concrete cone-shaped skylights top the basement, and also form abstract sculptures in the square.

The abundant amounts of semi-outdoor space regulate the microclimate of the building, while the thin floor slabs make the most of natural ventilation.

Mechanical rooms and shafts required for the laboratories, together with the vertical structural cores, are placed at both ends of the building. These then deliver the various building mechanical systems horizontally through the ceilings of the central corridor to different laboratories.

Other projects by Open Architecture in China include a prototype for a modular building system in Guangzhou and a Beijing school surrounded by gardens.

Photography is by Iwan Baan unless otherwise stated.