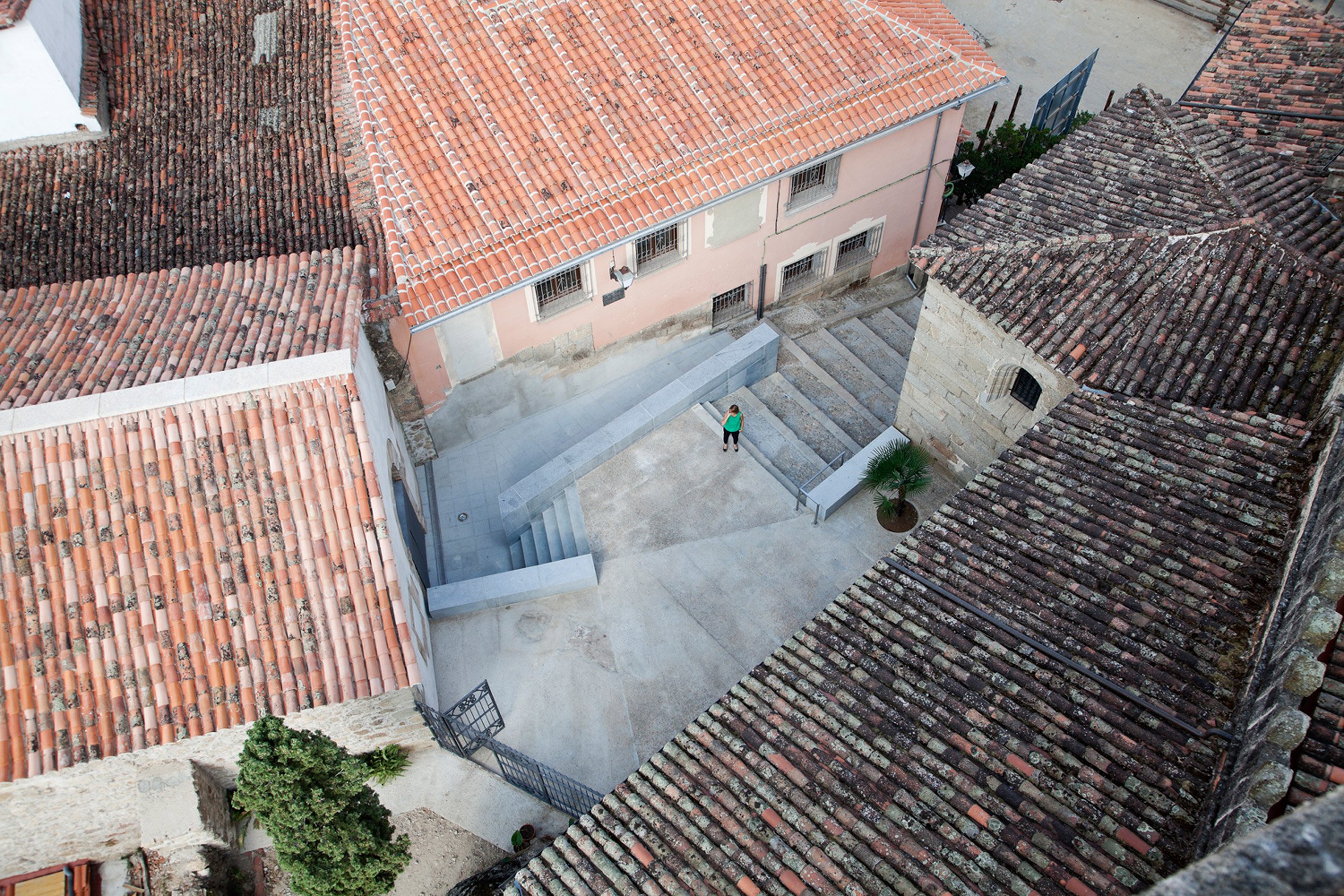 Architects Héctor Fernández Elorza and Manuel Fernández Ramírez have transformed a dilapidated chapel in Spain into a cultural centre by inserting a shell made of board-marked concrete.

The Spanish architects were tasked with converting the rundown Chapel of the Holy Sepulchre into a flexible community space for Jarandilla, a village in the province of Cáceres Jarandilla de la Vera.

The 100-metre-square chapel was built in the 17th century for the church of Santa Maria de la Torre. The structure is made up of two volumes, including an irregularly shaped entry space that had lost its roof and fallen into disrepair.

A five-metre-wide arch leads to the smaller and taller area behind this, featuring a semi-circular end wall and a domed roof with a circular skylight.

To reinforce its structural stability, Elorza and Ramírez inserted the 25-centimetres-thick structure made of reinforced concrete walls and roof into the shell of the main space.

Wooden boards recovered from the fallen roof were used to create the textured formwork for the concrete, leaving behind a trace of the former chapel.

“The developed work proposes an intervention of subtle, minimal actions on the original remains of the building,” said the architects.

“The remains of the shake roofing were used to create the texture of the formwork to construct the concrete shell, translating the wood texture of the old chapel to the new construction,” they continued.

The building’s front wall is lined with bevelled pieces of white-painted wood to form a pleated shape. These absorb sound and stop reverberations to allow the space to host music performances and theatrical productions.

“The interior acoustic absorption has been taken into account too, in order to avoid uncomfortable sound reverberations,” said the architects.

“This is solved by covering the interior of the facade wall with solid, beveled wooden pieces in line with the concrete shell that absorb and break secondary acoustic waves enhancing the interior comfort,” they continued.

The white boards are slightly raised on one side, to sit on top of a stone wall that belongs to the promontory the village has grown around. This stone also remains visible around the edge on the floor of the space, while granite tiles cover the rest.

A stainless steel skylight tops the dome’s small opening and features an angled face that reflects light into the white-painted rendered walls inside – a contrast to the concrete-clad room.

This is one of only a few openings in the building, including two more in the smaller volume and a semi-circular gap above the main entrance.

Because of this, the architects added a glass partition to the main entrance so that the steel double doors can be left open to allow more light inside. White spotlights also hang from the ceiling of this space.

“The width of this arched main entrance enables a double door that allows a variable relationship between the exterior and the interior of the chapel along with variable illumination too,” said the architects.

The architects extended the granite floor outside to the small square between the entrances to both the church and the former chapel. The stone forms a ramp and steps that connect to an existing pathway leading to the village’s main square.

Other cultural centres created within disused buildings include a warehouse converted into a venue for music, theatre and art events, a brick fire station converted into a library in Kortrijk.

Photography is by Montse Zamorano.