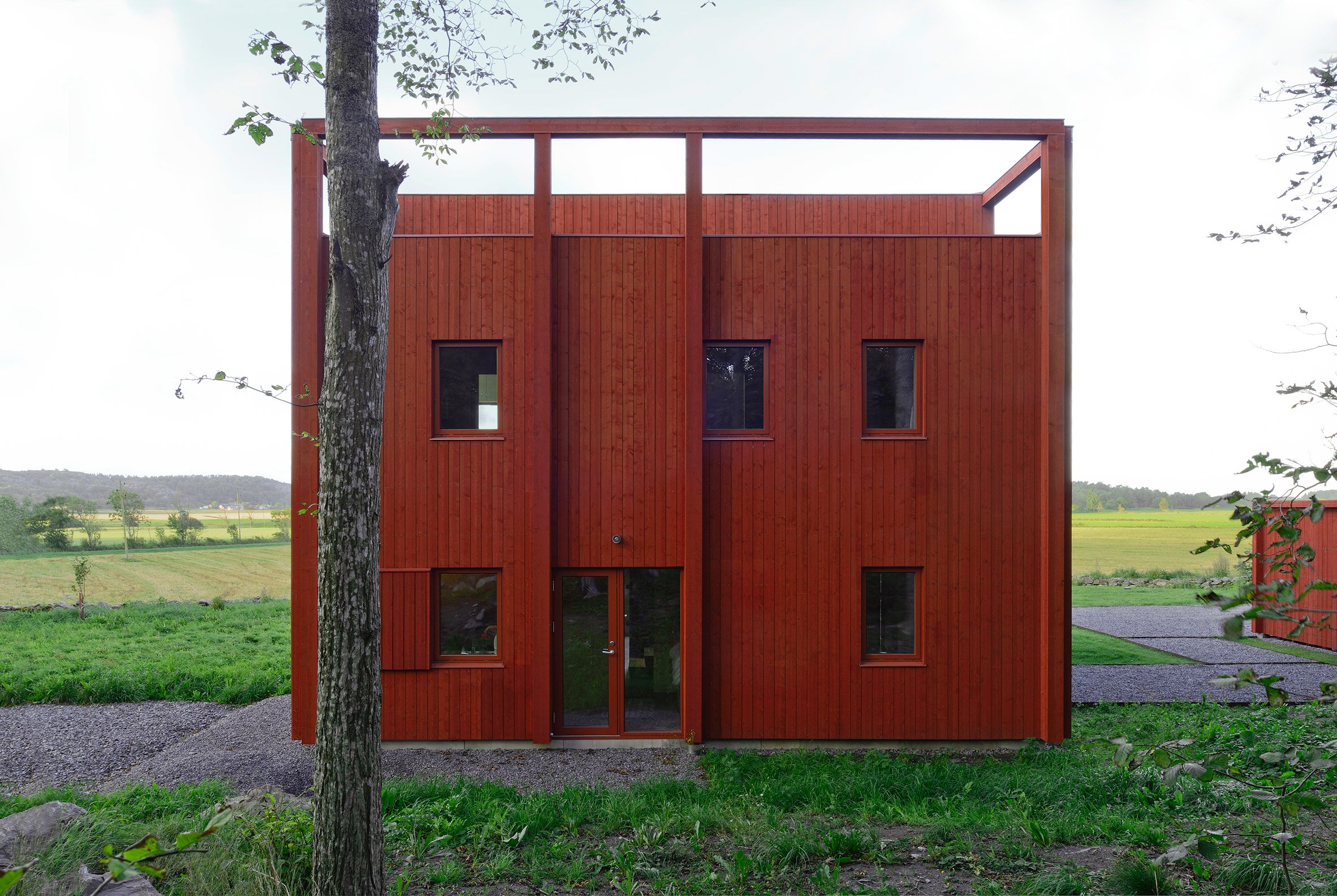 Traditional Swedish barns provided the inspiration for this red-hued wooden cabin, designed by Gothenburg studio Bornstein Lyckefors Architects for a keen sailor and his two children.

Located outside Gothenburg, on Sweden’s west coast, the house provides the family of three with an escape from the city that is also close to the ocean. It is named Späckhuggaren, which means Killer Whale, after the client’s sailboat.

The residence is located on the edge of farmland, on a site previously occupied by a 19th-century farm stall and warehouse, which were destroyed in a fire.

Taking cues from these simple buildings, the architects created a wooden frame, covered in thin vertical strips of wood.

These wooden surfaces are painted in a vibrant shade of red – a reference to the wood stain and preservative traditionally used on Scandinavian buildings, produced by Falu Rödfärg and usually referred to as Falu red.

This tradition is often referenced by Swedish architects, from Tham & Videgård to Claesson Koivisto Rune.

“The exterior is painted red with a traditional red Swedish white-wash often used on barns and older dwellings in rural areas,” studio co-founder Andreas Lyckefors told Dezeen. “We used it to pay tribute to an old country store that used to house the site in the 19th century.”

Other features that give the building its rural aesthetic are the large “barn-style” doors that open to reveal huge windows offering views from the living room.

As with the exterior, the architects selected a simple material palette for inside the house.

Wood dominates – from the exposed structural beams that span the ceilings, to the built-in plywood furnishings. This materials is complemented by the grey hues found in the concrete flooring and the wooden fibreboards, which line some walls, and were also used to build kitchen cabinets.

The building’s layout was designed to allow enough space for hosting large gatherings, but to also feel intimate when the family is alone.

The house is spit into three offset levels, including a small attic room, offering views between floors and the flow of natural light.

“The bearing concept of the design is an open section through the house,” the studio explained. “Just like the open plan, it allows the rooms to intertwine between the two floors.”

On the ground floor, the open-plan lounge, kitchen and dining room are grouped together on the western side.  A built-in plywood bookshelf with a fold-down desk runs up one walls of the double-height living area, which opens to the garden at the rear of the house.

A niche behind the kitchen is fitted with a daybed, creating a secluded reading area close to the building’s entrance.

Plywood stairs leads up to the first floor. Along with the two children’s bedrooms, this level includes a second lounge that hosts a drum kit for the father. Metal mesh forms one wall to offer views to the space below.

The upper floor is the smallest – its footprint matches that of the lounge on the ground floor set below it – and contains the father’s bedroom.

Lyckefors founded Bornstein Lyckefors in Gothenburg with Per Bornstein. The duo were later joined by Johan Olsson in 2012.

Other projects by the studio include a conceptual house that could be built without planning permission and a log-clad forest museum that pays tribute to Finnish slash-and-burn farmers.

Photography is by Mikael Olsson.

The post Bornstein Lyckefors Architects builds vibrant red cabin as a retreat for a Swedish family appeared first on Dezeen.